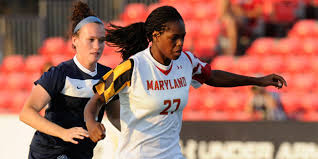 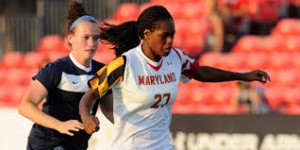 Hayley Brock leaves Maryland as one of its best-ever goal scorers, but is the NWSL in her future? (Photo: umdterps.com)

Senior night is always a special evening, regardless of the outcome of the match. For forward Hayley Brock and the rest of the Maryland seniors, Thursday’s game against Pittsburgh was extremely special.

Going into the Terrapins final regular season game, the team need a win to remain NCAA Tournament eligible and have a shot at qualifying for the ACC Tournament. Maryland got the job done, earning a 3-1 victory over the Panthers. Thanks to North Carolina State’s 2-1 upset of Wake Forest, Maryland also grabbed the final spot in the ACC Tournament.

It’s quite fitting that Brock scored the game-winner in Thursday’s match as the senior has been in the words of coach Jonathan Morgan “big time.” She also scored Maryland’s only goal in Sunday’s loss to Virginia.

Her accomplishments at Maryland are outstanding, especially considering she’s only spent three years at the school. In her time with the Terrapins, she’s scored 32 goals — good for third all-time in program history. She’s also third all-time in total points. The past two seasons Brock led the team in scoring, netting 13 in her junior year and 12 this year, despite missing two games with a concussion.

“My accomplishments here are way more than I ever thought they would be,” Brock admitted. “I seemed to fit right in to the style and I’m happy where I am right now.”

Morgan also noted how critical those goals from Brok have been.

“She’s scored a lot of big time goals. If you look through the goals she’s scored in her career, very few are against unranked or those low RPI teams. It’s usually against pretty meaningful competition in some big games,” he said.

Brock is a speedster known for her ability to get behind opposing teams’ backline and create havoc. In fact, Brock is not seldom faster with the ball than defenders without it trying to keep her from away from goal.

In her time at Maryland, Brock however has added a lot of tools to her skill set. Morgan noted that her technique, back to pressure and attacking on the dribble have all improved during her time with the team. Morgan also added that the work the senior has put in on her defense and tracking has inspired the younger members of the Terrapin squad.

Brock displayed her progression in Thursday’s match. With two minutes remaining, she slid a perfect pass to Alex Doody for an insurance goal. Morgan admitted that a younger Hayley Brock would have taken the shot.

Brock’s future after this season remains unclear as she admits she’s undecided as to whether she’ll enter the 2014 NWSL draft. She’s currently on track to graduate in May and entering the draft would mean she’d have to leave school. If Brock chooses to enter the NWSL draft, the prolific scorer would certainly be a welcome addition to one of many teams that struggled offensively.

Regardless of which path she chooses, Morgan certainly hopes that Brock has some more “big time” goals left in her.