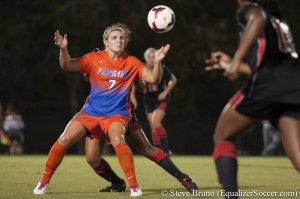 ATHENS, Ga. – No. 6 Florida defeated Georgia 5-1 on Halloween to land their lucky 13th regular-season SEC title. A series of defensive mistakes for the Bulldogs erased a strong offensive performance as the Gators rolled to their highest scoring output of the season. Florida (15-3-1, 9-2 SEC) split this year’s crown with Texas A&M (also 9-2 SEC) who won their final match of the season against LSU 3-2 a short time later.

The Bulldogs (12-6-1, 5-5-1 SEC) came out with their tails up from the opening whistle as forwards Maddie Barker and Marion Crowder combined for four shots and forced junior keeper Taylor Burke to make two saves within the first quarter-hour. The Gators, meanwhile, struggled to settle into their possession style of play and found it difficult to put together any meaningful offense despite their numerical advantage in the midfield.

“You have to make a decision when you play the University of Florida,” said Georgia coach Steve Holeman. “For two reasons. Number one: they play a system that you’re not used to seeing, so you have to make an adjustment there. If you don’t, then they’ll absolutely shred you, and then the second thing you have to decide: are you going to sit in or are you actually going to press them and we decided to press them and be aggressive.”

Georgia’s early aggression went unrewarded, though, and fortune smiled on the visitors in the 16th minute. A foul in the midfield set the Gators up for a free kick opportunity 40 yards from goal. Center back Christen Westphal served the ball into the penalty area looking for another Gator to get on the end of it. Instead the shot soared over Georgia goalkeeper Caitlin Woody as she missed her clearing punch and the ball continued, undeterred, into the back of the net, much to the dismay of the senior keeper.

The Bulldogs no doubt felt hard-done by the cruel twist and immediately set about righting the scoreline, launching two more shots Burke’s way over the next six minutes.

The defending SEC champs showed that even on a day when they can’t necessarily get into their comfortable passing rhythm, they can still find a way to score and so often this season they’ve done it through rookie revelation Savannah Jordan.

In the 26th minute, a Georgia giveaway in the midfield allowed junior Havana Solaun to spring Jordan in a quick-strike attack down the right flank.

“Havana got the ball and looked up, played a great ball in behind the line and I kinda fought through the first defender,” Jordan said of the play that sparked the attack. “I think she mis-cleared it and luckily it came to me.”

Jordan blew past her two defenders as she stayed on the ball, driving toward the top-right corner of the 18-yard-box and putting her shot away before the onrushing Georgia keeper could close down her angle.

Another Georgia mistake eight minutes later put the Gators up by three when the Bulldog goalie came out of her net to clear a ball, only to have it recovered by Solaun high in the midfield. The junior returned service, sending the ball over Woody’s head before the keeper could get back in net for her seventh goal of the season.

With just over a minute left in the half, the game was put well beyond Georgia’s reach as the Havana-Savannah connection struck again. Solaun, taking a corner kick from the left side, sent the ball to the far post where the 5’7” forward powered through the Georgia back line, heading the ball into the back of the net.

The goal, Jordan’s 20th of the season, surpasses Abby Wambach’s freshman total and she is now only 3 goals away from tying the best rookie tally in program history set by Andi Sellers in 1997. Her two goals on the night also mark Jordan’s seventh multi-goal game of the season, including three in the last four matches.

The Georgia native has flourished in coach Becky Burleigh’s lone-striker system and credits two factors to her success despite the extra heat she’s attracted from opposing defenses.

“After the first week, because I had such a big weekend, I know I was marked a bit more heavily than I was before,” Jordan said. “I think I use my teammates a lot and I rely on them because I know they’re there to support me and help and I think I just had to be more physical and tough and try to fight through double-teams, triple-teams… I’m already a physical player, but it kinda ups the level even more, it makes me want to play that way even more.”

Coach Burleigh agrees that, although Jordan generally is the headline-grabber, it’s with the help of the ten players behind her that she’s able to excel as the front-runner.

“It’s hard, when you look at our team, to pinpoint one player. It’s more about how we play together synergistically. Even to point out, in particular, individual players, it’s hard. When people ask me ‘Who’s the focal point?’, well, of course, people look at the stats and they think ‘Savannah’, which is obvious, but, at the same time, the players that are playing with her are creating those opportunities and she’s the recipient of those finishes.”

Solaun’s two assists give her seven to lead the team and, combined with her earlier goal, the junior now sits just behind Jordan for second in total points with 21.

Down 0-4 going into the second half, Georgia was able to fight back five minutes in as a rocket-shot on a fast-break from senior forward Barker narrowed the gap slightly and provided the Dawgs with a tangible result for their determined attacking efforts.

The goal was undone in the 66th minute when another UGA mistake, this time a handball in the box, resulted in a Florida PK which another native Georgian, Annie Speese, coolly tucked away to restore the four-goal advantage.

All told, the two teams finished level on shots with 12 each, while Florida held the advantage with eight on target to Georgia’s five.

Having wrapped up their 13th conference title, Burleigh’s team will be looking to complete the SEC double with a win in the conference tournament and, beyond that, a high national seed in the NCAA tourney. Burleigh thinks this season has presented the Gators with some unforeseen advantages that may help them down the postseason stretch:

“I think one good thing that’s happened to us is that we’ve hit the harder part of our SEC schedule later in the season and I think that’s battle-tested us a little bit more and I also think that our whole season, whether it was the non-conference part of the season or the conference part of the season, we’ve seen so many different people try different things against us that we’ve had a lot of preparation in what teams might throw at us whereas, in the past, a lot of times teams would just bunker and only bunker and that’s what we would see for the whole second half of the season.”

Coach Holeman’s takeaway from the game ahead of next week’s SEC Tournament in Orange Beach, Alabama isn’t the embarrassing scoreline but the team’s overall quality of play throughout the game:

“I actually think we come out of this game against Florida with a lot of confidence. Even though we didn’t get the result, we played incredibly well. We’ve been playing well in our last several games and our team knows that. We’re going down not to enjoy the beach; we’re going down to win some games.

“When you look at the result, you automatically assume ‘Well, Florida just dominated the game and they were the better team’ and that’s not the case. It’s a crazy game, that’s how soccer works.”

For a team largely in flux this season between a highly-rated freshman class and a large outgoing senior class, the Bulldogs can go into the postseason with their heads held high: Picked to finish 11th in the SEC preseason polls and battling through numerous injury setbacks, Georgia close out their regular season in sixth place overall, earning a bye in the first round of the tournament.

Both teams will resume their seasons on November 6th in the second round of the tournament, where No. 6 seed Georgia will take on No. 3 South Carolina, a team they beat in the SEC season opener, while No. 1 seed Florida will play the winner of the first-round match between No. 8 Arkansas and No. 9 Missouri.