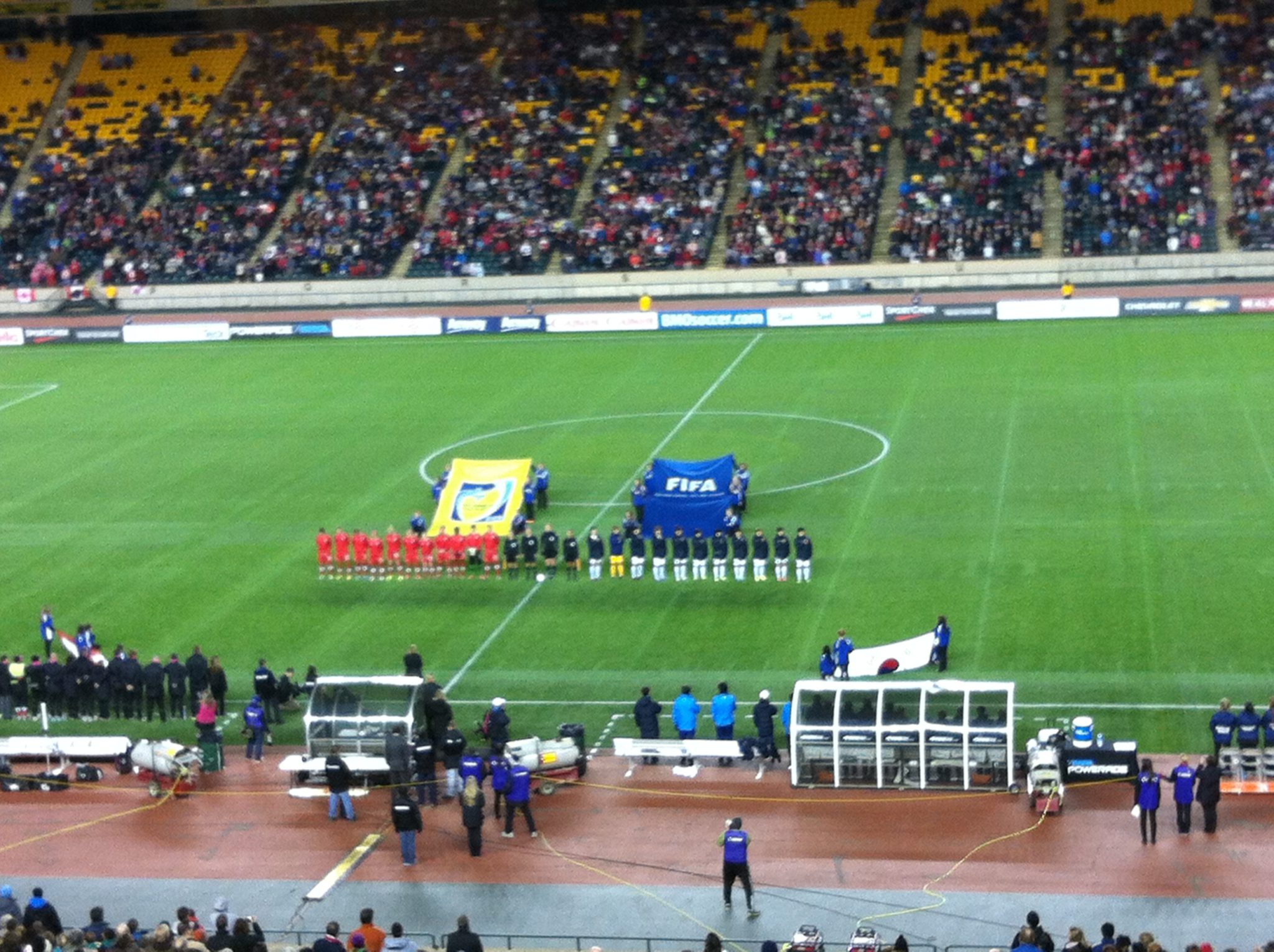 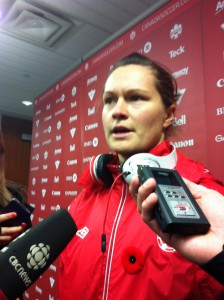 EDMONTON, Alberta – Canada took to the pitch against Korea Republic on a cool, and crisp Wednesday night at Commonwealth Stadium. John Herdman’s side were looking to build some chemistry after having his players away all summer with their NWSL teams. Canada talked about shaking off the rust, and they did just that with a convincing 3-0 win before 12,746 bundled up spectators in downtown Edmonton.

Canada scored a treble of goals from Christine Sinclair in the 23rd minute, Brittany Timko in the 35th, and 21-year-old Adriana Leon came on and sealed the win with the 3-0 goal in the 69th. Erin McLeod stood on her head in the first half making five spectacular saves to earn a joint clean sheet with fellow Alberta native Stephanie Labbe. Canada’s always jubilant head coach was thrilled with the victory when he met with the media.

“We were able to try out a few new players, young Sura Yekka got a chance to run out there, and looked a bit nervy, but did fantastically well to win the corner,” Herdman said.  “The quality of (Diana) Matheson, Sinclair, and (Sophie) Schmidt when they combined together, this Canadian team looks fantastic. All in all I think the Koreans were good for the game, and I thought they deserved a goal or two, and it could have been a closer match.”

Early into the match Korea had the best chances to score. In the 8th minute, forward Minji Yeo fired a shot from outside the Canadian box. Edmonton, Alberta native, McLeod was able to tip the ball up and over the net for a corner. Yeo tested McLeod again in the 20th with a shot that Canada’s number one keeper dove, and easily saved. Herdman has named McLeod his number one keeper, and it’s her job in net as long as she keeps up her outstanding form.

After Canada had been slow to get anything going offensively in the first twenty minutes, Christine Sinclair broke the deadlock with a headed goal in the 23th. Matheson had moments earlier earned a corner, and her cross into the box was headed off the pitch, and off the post past Korea Republic goalkeeper Min Kyung Jun. It appeared that Korea’s keeper thought the ball would roll wide, however it hugged the post, and found the net.

McLeod was the story in the first half of the match. The 30-year-old keeper was in the zone, and she made a pair of saves off So Yun Ji to preserve Canada’s 1-0 lead as Korea pressed for the equalizer. In the 32′ McLeod robbed Ji with a diving save to her right after the Korea Republic player fired a free kick over the Canadian wall that was heading to the back of the net. Ji rifled a shot from 25 yards out in the 35th minute, and McLeod was alert and able to tip that one over the bar as well.

Korea Republic had all the chances in the opening 45, however it was Canadian who pounced on their far too few scoring opportunities. Coquitlam, B.C. native, Timko scored from a Canadian corner in the 39th after 23-year-old Melissa Bosque headed the ball into the path of Timko. Canada was able to use their size to boss the Korean box off the corner, and the visitors’ inability to clear the ball resulted in the 2-0 goal. McLeod was the best player on the pitch, and her tremendous play in net was the only reason Canada was not trailing or behind after the first half. Herdman had nothing but praise for McLeod following the match

“Erin McLeod was at the best of her game. What a goalkeeper, and arguably the best in the world, and she’s for me.”

Herdman made a trio of changes to start the second half, with the most notable being in goal. Stony Plain, Alberta native Labbe came in to play goal for McLeod. Labbe is one of only two players on the team who plays her club football in Sweden with Damallsvenskan club Orebro.

Matheson had a great match for Canada, and was able to earn a pair of corners in the first half. Her hustle down the wing as a playmaker allowed her to create a dangerous scoring chance for herself in the 61st. The leading scorer for the Washington Spirit came down the right flank and shot from distance. Her effort was punched away by Min Kyung Jun.

Canada added to their goal scoring prowess in the 69th minute thanks to some lovely work by a pair of second half substitutes. Kaylyn Kyle played the ball up to Leon, and with two Korean Republic defenders closing in on her Leon was able to chip her ball past the Korean keeper as she was tackled to the ground. For Leon that was her 2nd International goal, and both have come against Asian based countries. Leon is a player who has a bright future for Canada, and her ability to convert so quickly after coming on in the second half should earn her a lot more minutes and responsibility from Herdman. The Newcastle man was thrilled with the teamwork that was shown on Leon’s goal.

“We put three goals in tonight,” he said. “One of the goals was just fantastic. That last goal, with the combination play was phenomenal.”

It took a little while for Canada to get going, but overall they dominated, and clearly showed that they were the better team on the night. Sinclair had talked about Canada using their size, and physical strength against Korea Republic, and that’s exactly what Canada did. Korea had some brilliant chances, but McLeod’s play she kept her team in the match until they found their game, and buried the chances they created.

Canada will look to continue this form when they host Mexico, on Sunday, Nov. 24, at BC Place Stadium in Vancouver, British Columbia.