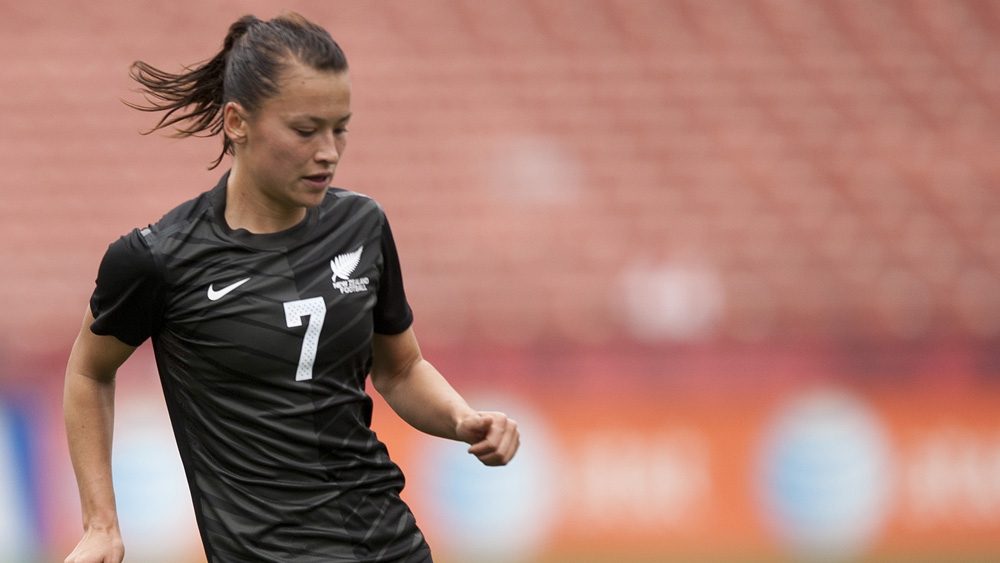 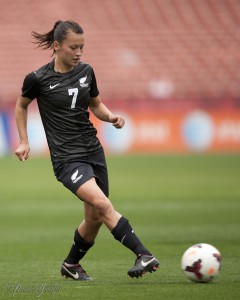 Ali Riley was one of the best defenders in Women’s Professional Soccer with FC Gold Pride and the Western New York Flash. She just won a Damallsvenskan championship with LdB FC Malmö, and she’s a key part of a New Zealand side looking to reach the next level. We explored the Football Ferns’ ambitions over the weekend. Below is the full Q+A from Friday with Riley, who on Sunday played in the Bay Area for the first time since her championship winning 2010 with FC Gold Pride. The U.S. beat New Zealand 4-1.

What do you hope to take from these two games against the U.S.?

“This is a really exciting time for us. Every time we’re together we improve, and coming off good results against Japan, Australia and obviously beating Brazil and China in Switzerland, it’s just been a huge period of growth for us and we’re looking to continue that. There’s really no better way to assess where we are, where we need to be and how far we’ve come than to play the best team in the world. We’re looking to keep improving. We want the first game to be better than our performance in Switzerland and we want the second game to be better than the first game. We’re just looking to get better and better and finish out 2013 on a high and then looking to really build again in 2014 World Cup qualifiers, which the date hasn’t been set up yet, but it could be the end of 2014.”

What is the team’s confidence like after winning the Valais Cup in Switzerland?

“Obviously you like to get results, to win and to win the cup, but for us it is really about performance. We’ve always been strong defending; we had to defend a lot in the past. Now we are playing, we are scoring goals. That is so exciting for us. The girls playing abroad has everyone improved so much. Everyone can hold the ball under pressure. We really are looking at our performances and then the results come from that, so that tournament we were just really proud of how we played and trained really well. It’s just really exciting.”

Are the U.S. games more about the play than the result?

“Obviously you want to win. Who plays the games and doesn’t want to win? But at this time we are building. We are looking to take steps forward. I think that’s true – obviously the European teams are qualifying right now – for us, we want to play well. When you play well, the results come and you can feel good about your performance. It’s always hard to break down the U.S., it’s hard to play under their high pressure. Brazil was playing man-marking and China plays a completely different style, so being able to analyze your opponent, play your game while still staying tactically smart and being prepared for everything that a team can throw at you when you go into a World Cup when you play styles from all over the world.”

How much has this young team progressed and matured since the 2011 World Cup?

“So much. I think it’s an advantage that we’ve been together for so long. There’s a core group of us that played together at the 2006 Under-20 (World Cup) in Russia. Everyone just playing in top teams in Europe, everyone has grown so much. I think it’s a completely different team but everyone has kept the strengths that helped us get through those Under-20’s, the World Cup, the Olympics and especially this last year that we’ve really developed the way we play. Now we test it against some second tier teams, a couple of top tier teams like Japan, but the real test is playing the U.S. and seeing if we can play this new style that we’ve developed. If we can really maintain that against the best team in the world, then you know you are taking a huge step forward.”

Is it a split household for your parents as far as rooting interests?

“It’s always strange playing against your home and your friends – mostly it’s weird playing against your friends. It’s been a good rivalry we’ve had with them. It feels like we have played them a lot. It’s always exciting to play in the States. The fans are so awesome here; obviously they are not cheering for us, but it’s really cool to see the support for the game and the support for the U.S. team is incredible. You want to see that everywhere.”

How did playing for New Zealand come about? Or, maybe best put, how did the U.S. not discover you?

“I was playing club and I wasn’t a top recruit and I never got pulled into any ODP or regional teams. My senior year of high school I had an opportunity to play for New Zealand; I’ve been a citizen since I was born. I just jumped at it, and that was 2006. The next year, I was already turning 20, I think, so I wouldn’t have been able to play another Under-20 (World Cup) and the next year was the World Cup in China, so I just had to go for.”

You just won a Damallsvenskan title with Malmö, which just advanced to the UEFA Champions League Round of 16. What has this past year-plus been like for you?

“It’s been incredible. To come out of the WPS folding and to be in a situation where I might not have had a team for the six months leading up to the Olympics was such a scary situation and pretty heartbreaking. From the Gold Pride folding to the league folding, it was a dire situation, so I feel so lucky to go to the team. Last year we had a good season but couldn’t get it together and then this year it all came together. It is so great. It feels similar to the WPS, with that vibe – the top players in the world, the Marta’s and you have Christen Press scoring hat tricks every game. It’s such an exciting atmosphere. While I think it lacks the fan support that the U.S. has, the level of play and the competition has been incredible. To win the league was so exciting. Now we have two huge games against the reigning European champs, so it’s going to be tough to get through the Champions League, but it’s been a really incredible year.”

That is quite the draw for Malmö, having to face Wolfsburg (treble winners last year). Has the preparation already begun?

“Yeah, we had to finish off the league and focus on that, and now with the European qualifiers, we’re taking a little break. But when we get back we have a little over a week to focus on them and it’s crazy how it works out. We had a top Norwegian team (LSK Kvinner FK) for the first round, too, and then you have Wolfsburg that won 27-0 on aggregate. So there’s definitely a range of levels of teams in Champions League.”

You are signed on with Malmo through 2015?

So U.S. fans can’t look forward to seeing you back here anytime soon like they did in WPS.

“No, unfortunately not. I love watching the league and I hope to see it progress. I’ve been able to catch some games, which is great. I kind of want to see it make it through that three-year curse before returning. I believe that it will make it and I would love to come back and play one day, but right now I think this is the best place to be – in Europe for football is so exciting.”

It’s been four years since you played at Stanford and in between you played with FC Gold Pride and the Western New York Flash, winning WPS championships with both. Now you have a title with Malmo and you travel a lot with New Zealand. Has it all come quickly?

“Yeah, and I feel so lucky. The Stanford program part of that development was so important and so good for me to be coached by Paul (Ratcliffe) and to play with Kelley (O’Hara) and Christen (Press), (Rachel) Buehler – the players that I’ve played with have been a huge part of my development. The Gold Pride, that team was a dream, and then to keep that same team for the Flash, I just feel so lucky. Also, being part of the development of this New Zealand team. I think it’s the reason why I play and why I love it is because the teams I’ve been on have had really great coaches and environments. I don’t know how I got lucky again in Malmo, but I am just so, so passionate about it. It’s pretty time consuming, so I feel so lucky to have a job that I love and play for a national team that’s my family.”