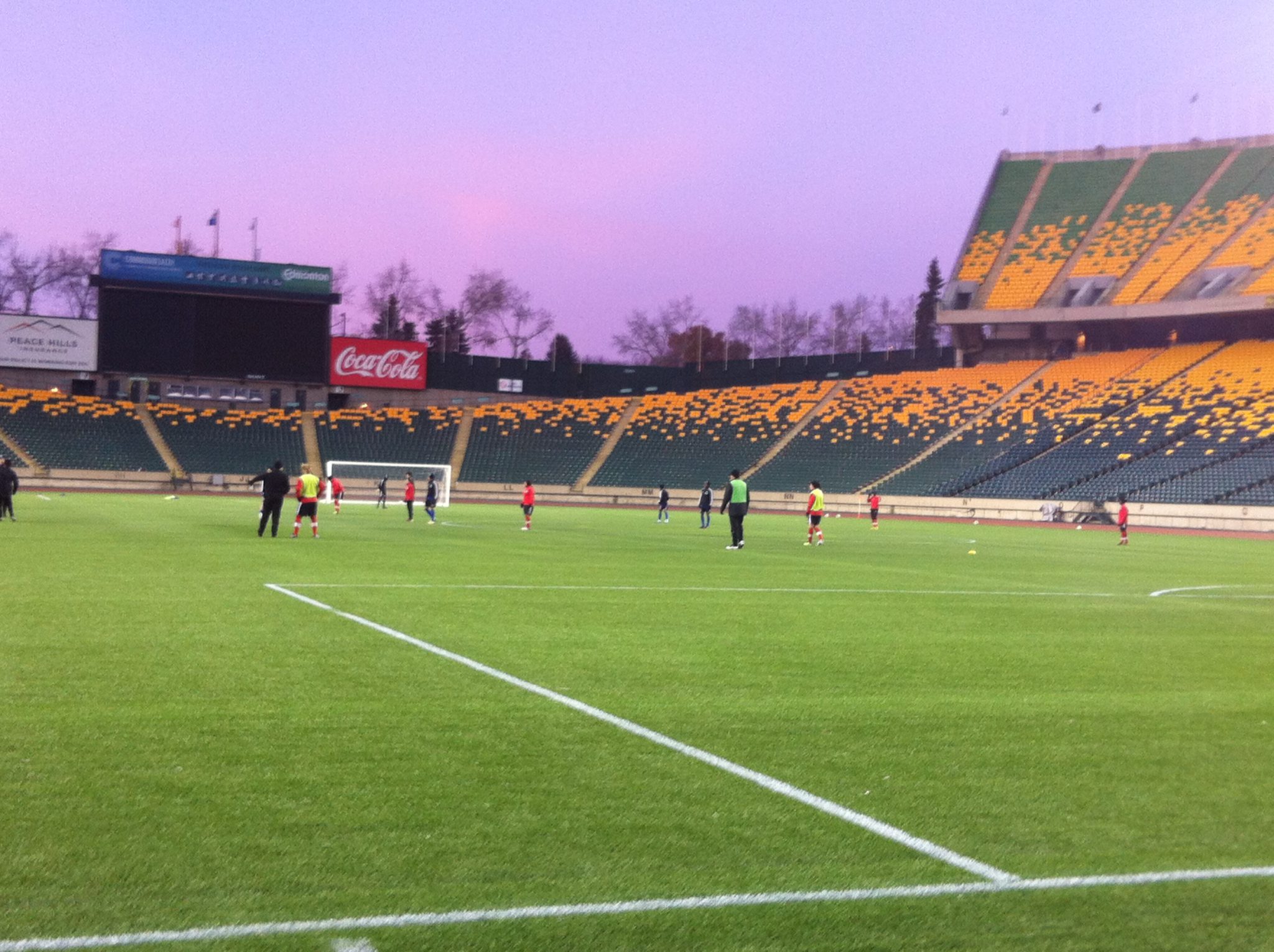 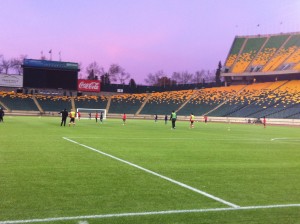 The temperatures for Wednesday's game will be frigid, as they were during Canada's training session Monday. (Photo Copyright Harjeet Johal for The Equalizer)

EDMONTON, Alberta – The Canadian women’s national team will play an important match against Korea Republic on Wednesday at Commonwealth Stadium in Edmonton. This will be the first match Canada has played since the NWSL season concluded in August.

In 11 matches this year Canada has compiled a record of 4-5-2. Canada is on a three-match losing streak, and have not played a match on home soil since a 3-0 defeat to the United States back on June 2 in Toronto. Canada’s key contributors have been away playing for their club teams in the NWSL and this match will be a great opportunity for the national team to get reacquainted with each other as they get set to go into residency camp in Vancouver following this match. Christine Sinclair talked about how great it is to have everyone back together with the national team.

Sinclair has had exceptional season with the Portland Thorns, and finished tied for fourth in league scoring with eight goals. The Burnaby, British Columbia, native was recently shortlisted for the FIFA World Player of the Year award, and Canada will be counting on Sinclair to lead the attack. Canadian coach John Herdman was not willing to tip his had as to whom will be starting up front with Sinclair as Melissa Tancredi is still away at university studying chiropractics. Tancredi will not join the team until she graduates in June. With her absence, Herdman talked about who might get an opportunity to play up top.

“It’s tough without Mel, she’s such a big player for this team, and she’s been a big loss this year. I can’t wait to get her back, but it gives some young ones a chance, and the young ones are Mel Busque, Adriana Leon, and obviously Britanny Timko coming back in as well. She’s got the bit between her teeth this week and she’s pretty excited to get back out on the pitch. Some young players have got to step up, but I don’t think you can replace Mel Tancredi.”

Canada battled Korea Republic once earlier this year on January 14 during the Four Nations Cup in China. Korea Republic came away with a 3-1 win against a youth-laden Canadian lineup. Nichelle Prince had the lone goal for Canada, and Sinclair served part of her FIFA suspension and did not take part. Midfielder Sophie Schmidt was one of the veteran players who played in that match, and she certainly remembers that encounter.

“I think we learned a lot from that game, we were trying new things, and playing out of the back a lot. We were vulnerable in certain situations and they made the best of it and now we know their strengths. They’re a really good transitional team, and they score from far out. They’re not afraid to shoot, and we know their tendencies. We’re just going to tighten it up and not give them those opportunities.”

Korea Republic is not known as a heavy powerhouse in women’s soccer but they often sneak up, and surprise opponents with their quick tactical and ball possession game. Korea Republic have often been compared to Japan. Christine Sinclair talked about the similarities between both teams.

“They have similar, similar styles. Very possession oriented with skilful players, but also players that we hope that we can physically take advantage of. That’s always been a strength of our team and weakness of there’s, but they are still a very dangerous team. They recently beat Japan so we can’t take them lightly.”

If Canada wants to be known as one of the elite teams in women’s soccer, Korea Republic is a team they need able to beat, and it can’t all fall on the shoulders of Christine Sinclair to get the job done. The youth movement for Canada has been very important part for Herdman as he looks to build Canada up for the 2015 FIFA Women’s World Cup. Herdman even went as far to suggest that Canada could face Korea Republic in the opening match of the World Cup.

“I think you expect to see the Koreans at this World Cup in 2015, and you never know it might be the opening match here in Edmonton. I think that’s the mindset we’re going to take. They’ve had a very impressive result against Japan just recently, beating the current world champions 2-1. I think it’s good opposition at this stage. They’re not the United States, but they’re going to cause us some challenges.”

Erin McLeod will start in goal on Wednesday vs Korea Republic. Canada will host Mexico on Sunday, November 24, at BC Place Stadium in Vancouver.