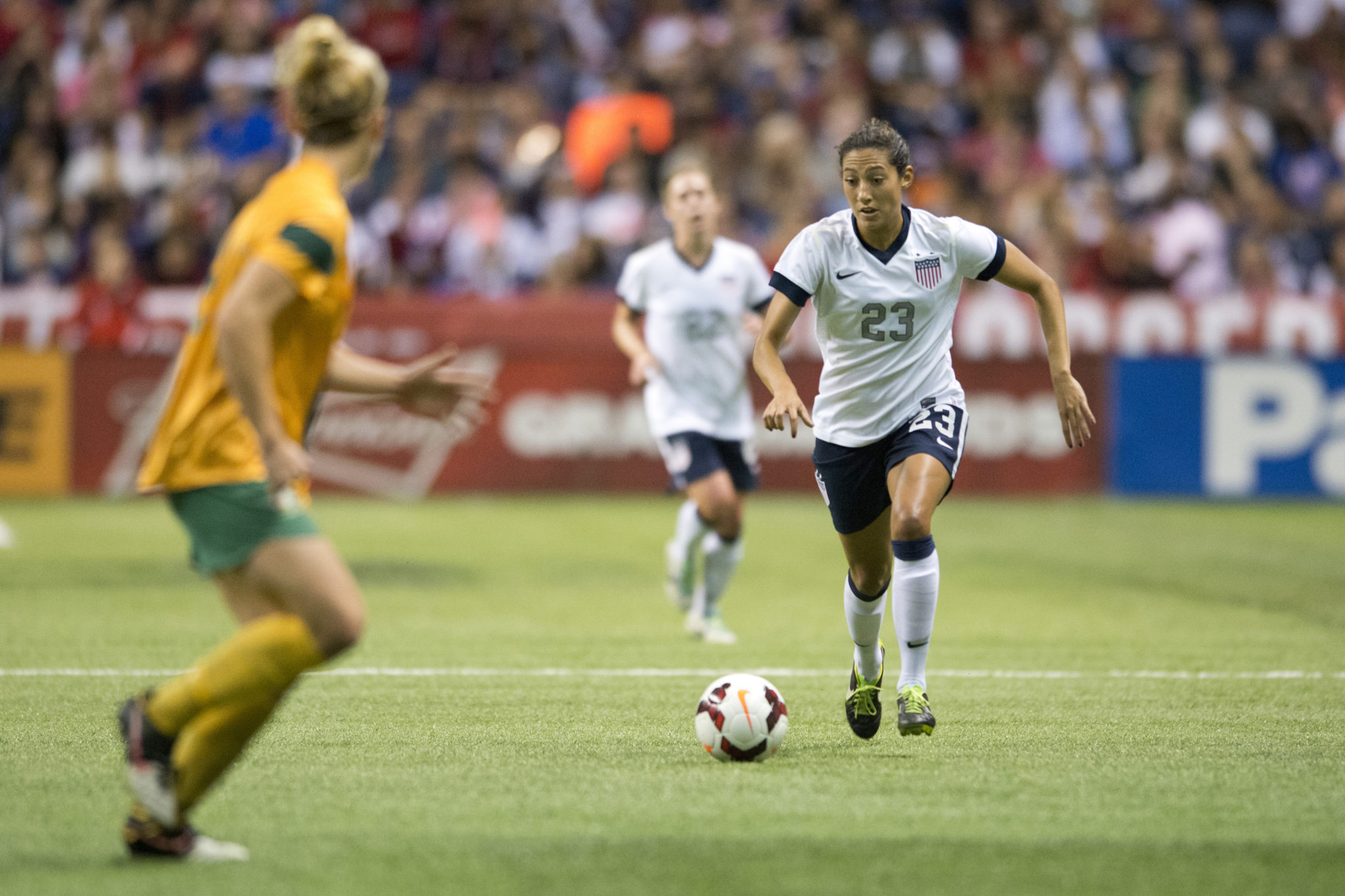 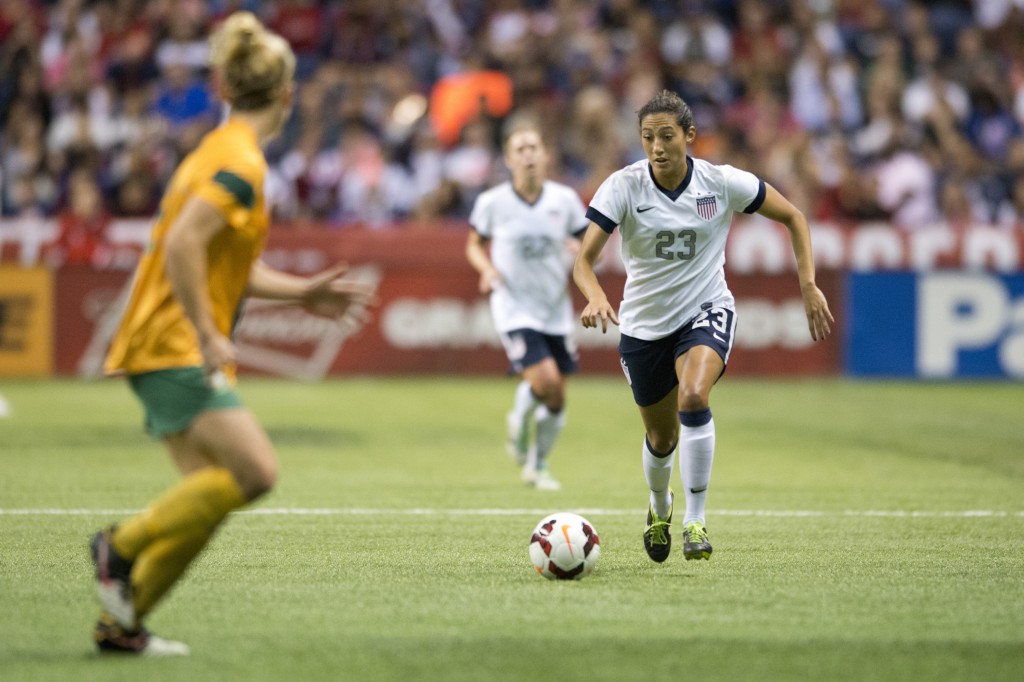 Christen Press says she may find her way to the NWSL sometime next year. (Getty Images)

Christen Press just became the first American woman to lead the Swedish Damallsvenskan in goals scored for a single season. She scored the only two goals for Tyresö in a 2-1 aggregate win over PSG in the UEFA Champions League Round of 32.

In 10 caps all-time — all this year — Press has seven goals for the United States. She’s been on fire regardless of where she is playing — both for club an country and whether up top or on the wing.

Press has said numerous times this year that playing in Sweden has been life-changing for her. But she also maintained that at some point, she would like to play in the National Women’s Soccer League, which still hadn’t officially formed when she signed with Tyresö nearly a year ago.

Now, with World Cup qualifying and the 2015 World Cup around the corner, it seems the time when U.S. fans can see the young star regularly stateside could be coming soon. Press says she has her eyes on playing in the NWSL “at least for part of next season,” whenever her Champions League campaign ends, but she sees the pros and cons of both the NWSL and the Damallsvenskan.

What has playing with Marta, Vero Boquete and Caroline Seger at Tyresö done for your game?

“I think playing on this team has been the highest level of my career thus far. The players are so different than the players I’ve been playing with, even on the U.S. national team; it’s a fantastic team, obviously, but the players have a different background, different experiences and a different style. It’s been really important for me to come with my American background to see the way the Spanish players play, the way the Swedish players play, Marta. They all bring something different to the table and most of the things they excel at, that make them great, I had never even seen on the field with me before. On one end it’s tough to play with such crafty players, especially as a striker, because I have to read them the whole game to get into positions to score. But I think that that helped my game grow a lot because I have to study the way they play, I have to be comfortable with the way they play and I have to ultimately be in sync with them.”

There’s still a lot to play out with Champions League, but have you thought about NWSL? Does Champions League change that, since you can’t get that prestigious of a tournament here?

“I see the pros and the cons. I would absolutely love to play in the United States in front of my family, my friends, my country and fans; that means a lot to me. It’s also very important to me to help grow the game and help make our league the strongest league in the world. But at the same time I have grown personally so much from playing in Europe, playing with the world’s best players and playing with players that have trained so differently their entire life than I have. I think that it’s just a matter of a give and take. I want to push myself to the maximum level and I want to be an American player playing in the United States. So I do think about the NWSL often. I think I will play in the NWSL at least for a part of next season. I’m going to finish out the Champions League season in Stockholm no matter how long that is. But I think after that I’ll come back, spend some stints with the national team and hopefully I’ll be here preparing for the World Cup qualifiers. We’ll have a lot of commitments. So I think that the time works out for another six months or so in Europe.”

Have you spoken with U.S. coach Tom Sermanni about playing stateside or the future of your club career?

“Yeah, I think that he knows the pros and cons and we’ve discussed it. He knows that I’ve been developing in Europe and that it’s easier for me to come into camp fresh if I’m coming from the U.S. Games like this, it’s really challenging, because we flew for 23 hours and I think there’s an eight hour time difference and we missed the first three or four days of training. It does affect the team and the closer that we are getting to major competitions, the more important it is to be here and be fresh at the start. But at the same time he wants the roster to be as strong as it possibly can and if that means I need to train in Europe, I think that he sort of feels the same and he has an open dialogue about it.”

I’m sure many people will be excited to know they might see you stateside soon. Some U.S. teammates, like Megan Rapinoe and Tobin Heath, are splitting time overseas and in NWSL. Would it be something similar to that?

The U.S. has four world-class forwards in you, Abby Wambach, Alex Morgan and Sydney Leroux. What is the challenge like for you trying to get on the field up top or adapting to a wide role, like you did Sunday against Australia?

“I think that every team you play for, you have to change. As I’ve become a more veteran player – not that I’m a veteran player – but I’ve learned that I played for three teams in the last three years and every time I’ve had a different role. If I’m asked to change again, that’s something I can do and I’ll do willingly. Every time that I’ve been in put in a new position, I’ve come out feeling better about myself as a player, so I’m comfortable with the idea and the opportunity to play in a new role. I’m not sure if that’s what I’m going to be asked to do. I think that on the other side of it, playing with three fantastic forwards and watching them, studying them and seeing how they play is going to be really good for my game. I think it’s a good problem that the team has that we have a lot of players that can score. I’m going to try to stay true to myself as a player.”

What is the interaction like between all the forwards as you push each other in training? Is Abby Wambach coaching up players?

“It’s really competitive throughout the whole team; that’s our culture. At the same time, Abby does a great job to step back and share what she knows from a ton of world-class experience. It’s fantastic that she is willing to share it with us all the time in every practice. She really does step into that role.”

Will playing in San Francisco be a bit of a homecoming, having played college soccer at Stanford?

“Yeah, my whole mom’s family is from the Bay Area, so with all my friends at Stanford I think I have like 50 people coming. It’s the closest I’ve ever played with the national team to home, so I have some people traveling up from Los Angeles, so I think it’s going to feel like a homecoming.”

Do you ever think about how much you’ve done in a few years, going from Stanford to magicJack, then over to Sweden and now with the U.S. national team?

“It’s been a crazy journey. It’s been a lot of fun and most of it is a surprise. I never expected this to be my life or my life plan when I was playing at Stanford, but I wouldn’t change it. It’s been four years, four teams, plus the national team is a new team, so I’ve been up and down and all over the place, but I think that the more you are exposed to, the more opportunity that you have and the better perspective that you have.”