Kyah Simon out a year with torn right ACL 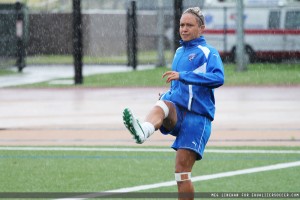 Kyah Simon is out a year after tearing her right ACL with Australia on Sunday. (Photo Copyright Meg Linehan for The Equalizer)

Australia forward Kyah Simon is out a for a year after tearing her right ACL in Sunday’s 4-0 loss to the United States. Simon stepped on the field in the 76th minute and lasted just 27 seconds before her knee buckled on the Alamodome turf in San Antonio, Texas.

Simon, 22, had three goals and three assists for the Boston Breakers in the inaugural National Women’s Soccer League season. She had just been loaned out to Western Sydney Wanderers for the Westfield W-League season in Australia, which begins Nov. 9.

“It’s obviously a disappointing setback,” Simon said from the USA. “I’m grateful to have such an experienced support staff around me to already have my rehab and recovery process under way and I look forward to coming back stronger than before.

“Every athlete has their setbacks, this one has been an unlucky one for me. My main focus for the next 12 months is my rehab, doing as much as I can within the restraints and returning for the W-League in 2014 and the World Cup in the 2015.”