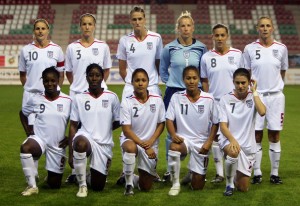 England is in a coaching wilderness, but still have their qualifying campaign off to a good start.

As men’s World Cup berths continue to fall it is never too early to take a look at how the field is shaping up for the Women’s World Cup two summers from now in Canada.  The trouble is that while the field has been expanding to 24 teams, the qualifying procedures have not been enhanced.  To this point, only Europe plays stand-alone qualifiers and only in Europe is a world power likely to realistically face the prospect of not qualifying.

Let’s take a look at what we know about Canada 2015 qualifying:

A round of playoffs left 42 European nations, drawn into seven groups, to fight for the eight spots.  After home-and-home group play that began April 4 and run through next September, the seven group winners go to the World Cup.  The four top runners-up go into a four-team tournament of two-leg series with the winner earning the last spot.  There is a catch, though.  Results against teams finishing last in their groups are not considered when selecting the four best runners-up.  That normally means uneven groups, but in this case it is with the assumption that last place teams will have little chance of competing with 1st and 2nd place teams and this codicil will prevent teams from running up scores against the minnows in order to pad goal difference.

In Group 1 the Germans are the team to beat.  The 2003 and 2007 world champions demonstrated as much when they slammed Russia, 9-0, to open the campaign.  The Russian side were considered the biggest threat to Germany winning the group.  Croatia, Ireland, Slovakia, and Slovenia are all looking for their first trip to the World Cup.

Italy are the only team from Group 2 with any World Cup history and they are a cycle removed from missing out on a tightly contested playoff with the United States.  And the Italians have made a strong start to the group with victories in Estonia and against Romania.  Spain could be the biggest threat to at least advance to the playoffs – could they even threaten to win the group?  The Spanish and Czechs have yet to play a match.  Estonia and Macedonia look to be the bottomfeeders.

Denmark reached the semis at the Euros earlier this year and took Norway to penalties before falling.  They are the featured nation in Group 3 despite having not played yet.  So far Switzerland have won the only two matches played in the group—over Serbia and at Iceland.  It was a tough start for Iceland, who has an eye on qualifying.  Israel, Malta, and Serbia are also in the group.

Group 4 houses Sweden, who have not missed a Women’s World Cup.  Scotland appear to be the logical challengers and started the campaign by hammering Faroe Islands and Bosnia.  Poland now feature Nikki Krzysik but have their work cut out for them to be in Canada.  Northern Ireland completes the lineup.

In Group 5, Norway appear set on rejoining the world’s elite.  They probably should have won the Euros and are big favorites to qualify direct out of this group.  Albania, Belgium, Greece, Netherlands, and Portugal—all looking for maiden trips to the World Cup—will line up to challenge Norway.

England figure to dominate Group 6 even with no full-time coach named since Hope Powell was kicked to the curb after the Euros.  Under caretaker boss Brent Hills they have already put six goals on Belarus and eight on Turkey without conceding.  Montenegro, Ukraine, and Wales will have their chances down the road.

France finished 4th in the last World Cup and Olympics and should find this qualifying group — Group 7 — to their liking in terms of getting back to the Cup.  Right now they are behind Finland due to a match in hand and they play the Finns in the last two qualifiers for both, over four days next September.  Austria, Bulgaria, and Kazakhstan have already dropped points and Belgium have yet to play.

CONCACAF – 3.5 (plus Canada)
The Gold Cup/qualifying tournament late next year is expected to again be the mechanism for advancing teams to the World Cup.  Three of them will go and a fourth will play a South American club for another spot.  That does not include Canada, who are already in as hosts.  This region might be the one where the extra eight teams plus the host spot highlights the dilution of qualified teams more than any other.

Asia – 5 qualifiers
The qualifiers will be determined at the Women’s Asian Cup next May.  Eight teams will participate.  Jordan, Myanmar, Thailand, and Vietnam advanced out of a qualifying tournament to join Australia, China, Japan, and South Korea.  It certainly seems like the latter four will be safe with the other four battling for the last spot.  It may have been more interesting with North Korea, but they are banned this cycle for doping offenses at the last World Cup.

Africa – 3 qualifiers
Africa will not determine its World Cup representatives until October 2014, when the top three finishers from the African Women’s Championship will go to Canada.  There are preliminary games set for next February.  There are too many to list out but of note is that Nigeria, who has not missed a World Cup, are in preliminaries against Sierra Leone.  Meanwhile Cameroon, Equatorial Guinea, and South Africa have free passage to the second preliminary phase in May.

South America – 2.5 qualifiers
Two teams qualify and a third plays a playoff tie against a CONCACAF country.  How will the spots be awarded? No one seems to know at this point.  However they do it, Brazil should be one of them.

Oceania – 1 qualifier
The tournament will go next September and the winner will qualify for the World Cup.  New Zealand will be an overwhelming favorite to come through.