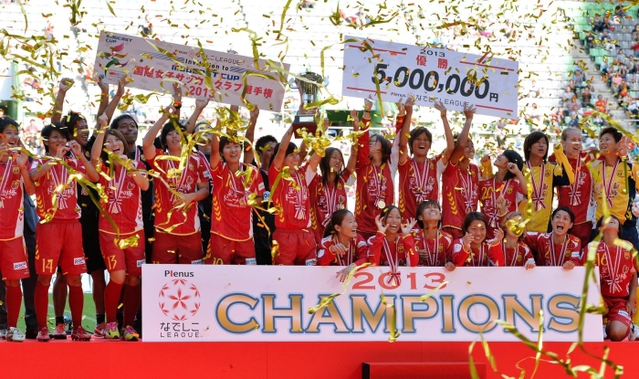 “I’m so glad we won the league,” said INAC midfielder Homare Sawa. “We had a hard time as we couldn’t play as we wanted to in many games, but molded together well and that brought us this victory.”

Christen Press will end the Damallsvenskan season as the golden boot winner, and Tyresö have clinched a second place finish and 2014-15 UEFA Champions League slot. Press, along with Tyresö teammates Ali Krieger and Meghan Klingenberg will now be available for the United States on Sunday against Australia. Originally, only Whitney Engen was set to be in San Antonio in time for Sunday, but Tyresö clinching second place a week early means Press, Krieger and Klingenberg will fly straight from Paris — after Wednesday’s second leg the Champions League Round of 32 vs. PSG — to Texas.

Nikki Cross scored for Bayern Munich, but 1. FFC Frankfurt defeated Bayern 4-1 to knock them off the pace. Potsdam now lead the league with 13 pts. after defeating Bayer Leverkusen, 5-1. Frankfurt are now on 11 pts., along with Wolfsburg, who defeated 1899 Hoffenheim, 4-1. Bayern Munich sit in fourth place, on 10 pts.

Check out all the goals from the weekend:

For a full recap of Champions League action and international news and notes, check out Tim Grainey’s roundup.