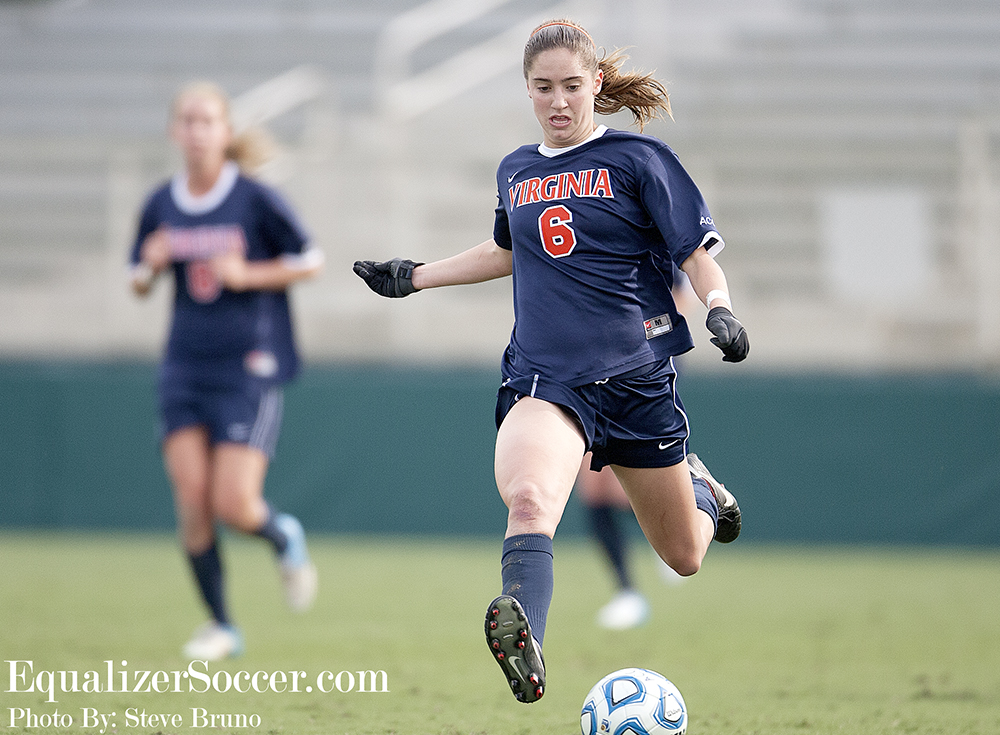 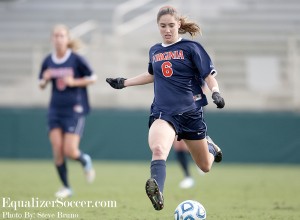 The much anticipated matchup between the top ranked Virginia Cavaliers and ninth ranked Notre Dame Fighting Irish lived up to its billing. The Cavaliers needed double overtime to defeat top Notre Dame, 3-2, and move to 13-0.

Morgan Brian headed Danielle Colaprico’s corner kick in for the game winner in the 101st minute. Notre Dame protested to no avail that Brian’s shot failed to cross the line.

“Any OT game you play is pretty intense like that especially in front of Notre Dame,” Brian said. “We were just in the huddle and Steve (Swanson, Cavs coach) said if we win this thing come celebrate in front of this crowd over here. What had happened was that the ref. put his flag up and i just saw it and did what Steve said and ran over there.”

It rained all 101 minutes of the match, at times very heavily. Despite the brutal weather, Virginia set a new all time attendance record of 2,838. If Virginia manages to return from their upcoming three game road trip undefeated, that record will likely be topped.

Virginia wasted no time getting on the board in this match. Gloria Douglas gave Virginia the lead in the fourth minute when she headed in a corner kick taken by Colaprico.

Notre Dame answered in the 25th minute. Morgan Andrews headed the ball towards the net, Andrews’ shot hit off the woodwork and fell to Elizabeth Tucker, who quickly tapped it in for the goal.

Despite dominating possession throughout most of the first half, Virginia failed to notch another goal. Notre Dame defended well and broke up many potentially dangerous opportunities before Virginia could get a shot off.

Virginia nearly did get another goal in the final minute of the first half. Virginia had a corner kick that was initially headed away by Notre Dame, Molly Menchel sent it back in for the Cavaliers. The ball bounced off Notre Dame keeper Kaela Little, and bounced around a bit more just outside the goal before rolling away.

Virginia regained the lead five minutes into the second half. Menchel sent a cross into the box which was intended for Brian. The ball missed Brian and the clearance attempt by Rebecca Twining resulted in an own goal.

For the first 25 minutes of the second half, Virginia held Notre Dame to one shot in the half. Notre Dame put together a series of chances together with about 20 minutes left to play and found a equalizer. Taylor Schneider sent a cross into the box which Tucker volleyed the ball beyond the reach of Morgan Stearns for a goal in the 73rd minute.

Neither team could find the game winner in regulation. In the first overtime, Virginia dominated possession but failed to score. Brian quickly scored in the second overtime period to keep Virginia’s perfect record.

“Full marks to Notre Dame I thought they played a great game to go down in this environment and come back and get themselves even there was good but I thought our players played with great resolve as well. It was a great college game,” Swanson said.

Both sides need to recover from overtime match quickly as each faces Top 25 opponents Sunday. Notre Dame will face the twelfth ranked Virginia Tech while Virginia will take on eleventh ranked Wake Forest.