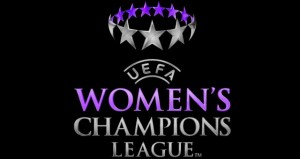 The UEFA Round of 32, two-leg matchups are underway. Wednesday’s action has concluded:

Tyreso 2-1 Paris Saint-Germain: Christen Press continued to build on her remarkable year with a pair of goals to give the Swedish side a narrow edge heading to Paris.  Press was also whistled for the foul which led to PSG captain Sabrina Delannoy converting a penalty for the lone visiting goal.  The game did not end without drama though as Tobin Heath hit the woodwork in an effort to bring the tie level.  Tyreso, in their maiden Champions League, now face the tough task of holding a one-goal lead in the return leg.  Delannoy’s away goal means Paris Saint-Germain can go through with a 1-0 win next week.

FC Twente 0-4 Lyon: Lyon set a course for their 5th straight final by taking hold of this tie on the road in Holland.  Louisa Necib put last year’s runners-up on top in the 22nd minute.  Necib’s goal was supported by Saki Kumagai, Laetitia Tonazzi, Lotta Schelin who all scored before an hour was up.

UPC Tavagnacco 3-2 Fortuna Hjorring: Maria Zuliani buried the deciding goal in the 74th minute to lead the Italian hosts back from 2-0 down after 28 minutes.  Florentina Spanu Olar opened for the visiting Danish club in the 11th minute and captain Janni Arnth doubled the lead.  It took only five minutes for Elisa Camporese to pull one back and Alessia Tuttino gave Tavagnacco a boost by leveling the proceedings in first half stoppage time.  American Amanda McMullan was not available for selection by Fortuna.

Spratzern 2-2 Torres: Sabrina Marchese’s 90th minute goal delivered Torres a 2-2 draw away to Austrian side Spratzern and a decided advantage for their return match next week in Italy.  Nicole Billa scored twice for Spratzern but was equalized on both times, first by Silvia Fuselli and later Marchese, who only entered the match in the 88th minute.

Glasgow City 2-2 Standard: Jessica Fishlock went the whole way for Glasgow and wound up in the referee’s book but it was teammate Suzanne Lappin who spoiled the party in Belgium by twice cancelling out leads for the hosts.  Vanity Lewerissa (27th) and Tessa Wullaert (50th) gave Standard leads but Lappin struck back with goals in the 44th and 66th minutes.

Barcelona 0-0 Brondby: The only scoreless draw on the day give Brondby the edge with the tie on its way to Denmark.

PK-35 0-3 Birmingham City: Melissa Lawley, Kirsty Linnett, and Kerys Harrop scored to give England a second away win on the day.  Fortuna Velaj, who played college soccer in the states, featured for the Finnish champs and was replaced after halftime.

Thor/KA 1-2 Zorky : Amy Barczuk and Ashley Nick went the full 90 for the Russian victors but neither factored in the scoring.  Those honors went to Svetlana Tsydikova and Elena Morozova.  Substitute Hafrun Olgeirsdottir gave the Icelandic side something to cheer about late and cut into the aggregate.

Parnu JK 0-14 Wolfsburg: The holders had a half dozen goals after 26 minutes and rolled to a lopsided win that will make for an awkward return leg next week in Germany.  Lina Magull scored four times and Martina Muller had a hat trick in the win.  Adding to the woes in Estonia was the 85th minute send off of keeper Elis Meetua.

CSHVSM-Kairat 1-7 Arsenal: Six different players scored for Arsenal in this first leg rout of the Kazakhstan side, with Kim Little providing a brace. Jordan Nobbs, Rachel Yankey, Danielle Carter, Katie Chapman and Freda Ayisi all found net as well. The Gunners are well on their way to the Round of 16.

Spartak Subotica 2-4 Rossiyanka: Natalia Shlyapina registered a hat trick – one the goals coming from the spot – to lift the ambitious Russian side past their Serbian hosts. Nompumelelo Nyandeni had the other goal for Rossiyanka, while José Nahi and Claudine Meffometou Tcheno scored for Spartak.