USWNT to play Brazil in Orlando on Nov. 10 on NBC 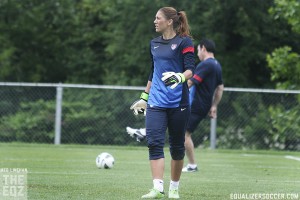 Hope Solo and the U.S. Women's National Team will play Brazil on Nov. 10 in October. (Photo copyright Meg Linehan for The Equalizer)

The United States women’s national team will face Brazil on Nov. 10 at the Citrus Bowl in Orlando in the Americans’ last game of the year. The game will be broadcast live on NBC at 3:30 p.m. ET.

The United States last played Brazil on April 3, 2012, in Japan, a 3-0 win in a match that just barely beat out a monsoon after having the kickoff time moved up.

“Over the last several years, there’s been an intense rivalry between the two countries and a series of games that have been very tightly contested, highly competitive and of course extremely dramatic,” U.S. head coach Tom Sermanni said. “It will be a fantastic game to finish the year off.”

The Nov. 10 match will continue a busy stretch for the United States women, who first play Australia on Oct. 20 at the Alamodome in San Antonio, also on NBC at 3:30 p.m. ET. The U.S. will play New Zealand on Oct. 27 in San Francisco and Oct. 30 in Columbus, Ohio.

Orlando and the Citrus Bowl hold some history for the U.S. women. They trained in the city prior to the 1995 and 1999 World Cups and played two group games there during the 1996 Olympics, beating Denmark and Sweden. The Citrus Bowl is also where Mia Hamm broke the international goal scoring record (now held by Abby Wambach) on May 22, 1999, when she scored her 108th international goal. That is also the last time the U.S. women played there, but USL PRO club Orlando City SC was influential in obtaining the match. Orlando City hopes to become an MLS expansion franchise and just cleared another hurdle for obtaining a new stadium.

U.S. coach Tom Sermanni will rotate players during the three October games. Here is his full roster for the October camp.