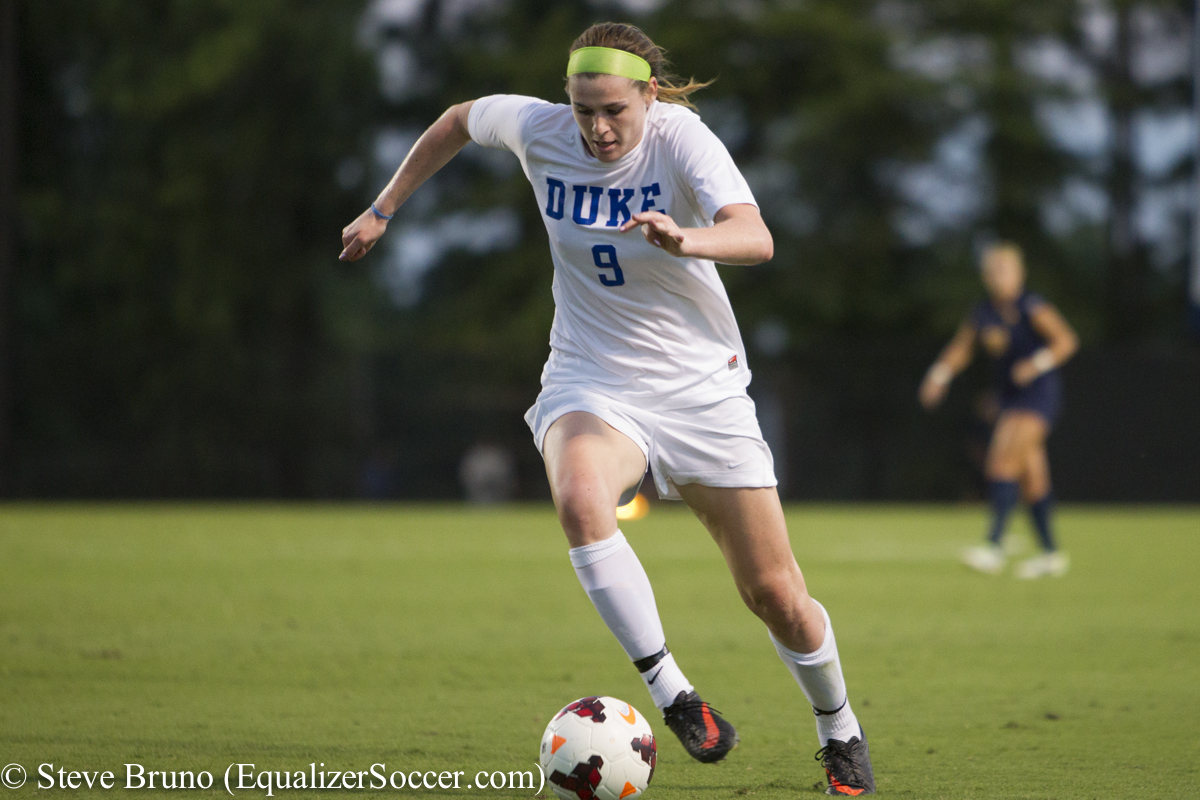 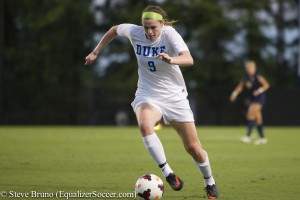 Kelly Cobb gave Duke an early lead, but Virginia erased the 2-0 deficit to win 3-2 on Thursday. (Photo Copyright Steve Bruno for The Equalizer)

The Virginia Cavaliers came from behind on the road for the third consecutive game to win 3-2 against Duke, preserving their squeaky clean 10-0 record on the season. The No. 1 team in the nation went into Durham having not lost there in 10 years, but with last November’s stinging Sweet 16 loss to the Blue Devils in Charlottesville still to be avenged.

Virginia had a difficult time dealing with Duke’s lively, direct play and in the 9th minute the Blue Devils jumped out to an unexpected lead as a through-ball from forward Mollie Pathman’s diagonal pass found Kim DeCesare out wide on the right side. DeCesare drove toward the endline before serving in to a closely-marked Kelly Cobb, who poked it in from close range for her second of the season. Duke added another minutes later as a ball partially cleared by the UVA defense off a corner was served back into the box by Cobb. Kaitlyn Kerr lingered in the box as the defense pulled out and was in perfect position as the ball sailed back. Kerr, back to goal and with the ball heading toward her, reacted instinctively, flicking it over her shoulder with her right foot as her momentum carried her backward, sending the ball past Cavs keeper Morgan Stearns. Virginia tried to fight back through their fluid passing game, but had only a few lukewarm chances in the half to show for it.

Up 2-0 at the half, it looked as if Robbie Church’s side might finally have had some luck break their way after a team ravaged by injuries has seen their poor fortunes drop them from No. 7 in preseason all the way out of the current Top 25. Sunday’s draw against Syracuse after leading by two needed to be a distant memory if the home side were going to withstand Virginia’s swarming offense, but the Blue Devils crumbled almost immediately under the pressure.

Virginia coach Steve Swanson said going into the second half that his team would have to deal with Duke’s direct play more effectively in the coming half, but it was his side that took Route 1 as the Cavaliers came out with a different, more direct approach from their usual possession-oriented game. It paid immediate dividends.

Morgan Brian led her team back with less than two minutes off the clock as a slicing ball fed in from Danielle Colaprico at the halfway line found Brian outside the box. The midfielder turned on it as the ball came toward her and immediately sent it to the back of the net.

A minute and change later, UVA produced a carbon-copy goal. This time it was defender Molly Menchel sending a ball from behind the center line through the Duke defense to connect with Makenzy Doniak, who one-timed it from distance.

Virginia continued to get great looks as Doniak’s 57th minute long-range shot just grazed the outside of the post and Gloria Douglas split the Duke defense a minute later for a one-on-one with Duke keeper Ali Kershner, but couldn’t get past the freshman. With 27 1/2 left, a poor trap by Duke at the center line accidentally fed Doniak a leading pass. The forward broke past two Duke defenders again with only Kershner between her and the lead, but the sophomore’s shot curved just wide of the far post.

The constant barrage taxed the tired, makeshift Duke backline with forwards Pathman and Laura Weinberg dropping back on the defensive flanks, trying to at least salvage a point. As the clock hit 80, defender Shasta Fisher made a long run in space toward the end line and sent a diagonal ball through the box, where Gloria Douglas slammed it in for the game-winner. It was the Cavs’ fourth come-from-behind win so far and the most in a season since 1998.

Brian admitted after the game that UVA’s shocking post-season loss to Duke in Charlottesville, eliminating them from the NCAA Tournament, was still fresh on the team’s minds and gave them extra motivation to fight back in the second half. Watch highlights of the match here.

Virginia return home on Sunday to take on a Maryland side that won’t be too happy after tonight’s result….

No. 5 Notre Dame 5, No. 21 Maryland 0: She can defend, she can attack. Playing up top for the first time this season, Cari Roccaro finally netted her first goal to get the Irish on the board at home against Maryland and, as the scoring feeling began returning to her legs, she went back for more. Roccaro ended the night with a hat trick as Notre Dame gutted the Terrapin defense for five goals. Crystal Thomas scored the second of the evening between Roccaro’s trio while Anna Maria Gilbertson’s 78th minute strike for the fifth was a spectacular rocket from distance. The five-goal rout against a Terrapins side that just sank No. 9 Wake Forest the previous week was a welcome relief from last week’s tame 1-0 output against lowly Syracuse. Notre Dame stay perfect in the ACC at 4-0 and 8-1-0 overall as they move on to face Pitt in South Bend at the end of the weekend.

No. 3 Florida State 4, Miami 0: It was one-way traffic all night as the Seminoles matched the goal-scoring output of their last four games combined against a Miami side that registered its first suggestion of attacking intent in the 77th minute. Berglind Thorvaldsdottir had a pair of goals in the first half to put the contest well beyond the Hurricanes’ abilities as FSU rolled to remain undefeated at 4-0-1 in the ACC and 9-0-2 overall.

Pitt 0, No. 6 North Carolina 1: Credit the Pitt defense or bemoan UNC’s lack of finishing, but, with 34 shots taken by the Tar Heels, this one should’ve been a blowout. Paige Nielsen’s shot in the eighth minute was the only dent the visitors could manage on a night that saw their chief rivals in the conference put on some heady performances.

Boston College 1, No. 9 Wake Forest 0: The Eagles nearly shocked No. 2 Stanford, taking the lead in the season opener before falling in double-overtime, and had No. 1 Virginia against the ropes last weekend. On Thursday, BC finally toppled a Top 10 tree, defeating Wake Forest 1-0 in Newton, Mass., off McKenzie Meehan’s 22nd minute goal. The streaky Wake offense went to sleep again as the Eagles held them to one on-target shot and Deacs’ forward Katie Stengel managed just a single shot all night as Wake dropped their second consecutive 0-1 result.

NC State 1, No. 16 Virginia Tech 4: Virginia Tech continue their dark horse run through the ACC, moving to 4-1 in the conference and 9-1-1 overall. Four different Hokies scored for another impressive showing while NC State’s Jackie Stengel bested sister Katie in the scoring column, racking up the Wolfpacks’ lone goal.

There was key action outside the ACC as well:

No. 10 Georgetown 1, DePaul 1: Georgetown opened play in the new-look Big East with a 1-all draw that saw the Hoyas go down two minutes into the first half. Georgetown managed to get back level in the 58th minute off a header from Mary Kroening, but couldn’t produce another goal despite out-shooting DePaul 13-3 in the second half.

No. 17 BYU 0, No. 19 Denver 1: Cold, rainy conditions in Provo were the backdrop for a tight contest where goal-scoring opportunities were few and far between. Denver’s Nicholette DiGiacomo finally broke the deadlock with under three minutes left as she found herself in the box unmarked and turned to slot the ball into the corner past keeper Erica Owens. Although the Cougars limited Pioneers’ all-time points leader Kristen Hamilton’s chances, she still figured in the scoring, tallying the assist on DiGiacomo’s goal.