The Lowdown: Breaking down the NWSL trades 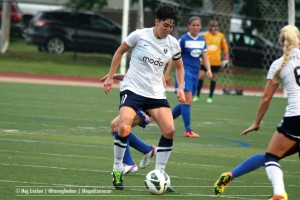 Keelin Winters was the first NWSL player ever traded when the Red Stars shipped her to Seattle before pre-season (Photo copyright Meg Linehan for The Equalizer).

Here is a look at the trades that took place in NWSL since the league began stocking rosters.  In most cases it is still too early to determine who got the better of the deal.  That does not make it any less fun to try and figure it out.  We’ll revisit these down the road to see how they evolve.

This was the first and most interesting trade to go down and the results are far from complete.  Beyond the draft picks there is still the matter of the Reign sending the Red Stars a player from the pool getting paid by U.S. Soccer.  When the trade happened there was rampant speculation the player would be Amy Rodriguez, who sat out 2013 to have a baby.  But indications are Rodriguez is preparing to play for the Reign and that she will not be the player heading to Chicago.  Stay tuned — the swap has to come by Sept. 30.

As for the trade as a whole it seems impossible we will ever look back on it and not think the Red Stars got the better of the deal, likely by a wide margin.  Winters played well enough in Seattle, but she would have had no place in Chicago.  Additionally the Red Stars now get an extra U.S. player and the No. 2 overall pick, while the Reign enter the draft without a 1st rounder.  They wound up dealing the 4th round pick to Washington.

The Red Stars could very well be keeping company at the top of NWSL in 2014 and if they do this trade could be a big reason for it.  The Reign, who received an excellent allocation of U.S. players, saw them all fall by the wayside (Hope Solo had shoulder surgery and Megan Rapinoe signed in France) and may have pulled the trigger a bit quickly in an effort to open the season with an allocated American.

The Breakers needed depth in back so they sent a 2nd rounder to Western New York for Mercado, who had not played for the Flash.  She played for the Breakers—once—before being granted her release to tend to personal matters.  The Flash wound up with the No. 12 pick in January while the Breakers wound up wondering what might have been.

Another deal that seems to be going against the Reign.  Desperate for a scorer they pulled the trigger on Cuellar, who wound up playing 342 minutes and accumulated more yellow cards (1) than combined goals and assists (0).

The Blues unloaded a player who had fallen out of favor and also acquired Krzysik, who sat out the season to stay near her now husband in San Diego.  She is expected to play in 2014 and while she may not have a spot on a solid FC Kansas City backline, she can add either depth or be a tradable asset.  FC Kansas  City may have underutilized Noyola but they still managed to come out slightly ahead on this deal.

This was a total panic move on the part of the Spirit and it cost them a Top 10 pick.  Taylor did little in a Spirit kit and has since been waived.  The Reign get the No. 9 pick and all they had to give up was what turned out to be the 27th overall pick, originally acquired from the Red Stars.

We’ll see how the draft picks pan out, but there seems little chance the Spirit can end up on the high end of this one.

This was looking to be a lopsided exchange of  Canadian allocations that favored the Red Stars, but the Breakers were able to flip Moscato for Kaylyn Kyle after the season ended.  That won’t change the win factor for the Red Stars, who moved an extra defender who had barely been on the field for an attacking player who added a much-needed bit of technical ability to the team’s play in the final third.  Leon did not find the scoresheet after notching a goal and assist in her second game with the Red Stars but remained an effective part of the attack.

Leon had lost playing time in Boston so the trade for Moscato was a bit more of wash locally.

This one just happened so it is far too early to judge.  There is also a rule about not jumping to conclusions about off-season moves until a team finishes with their plan and runs a team out on the field the following season.

Did the Reign make this move for roster flexibility? Moscato turns 30 in May and would have been near the top of the list as far as Canadians to be dropped from John Herdman’s subsidy list.  Either way, the loss of Kyle opens up a spot in central defense where the Reign can look to find a player to tie the group together.  The Breakers have already said the trade for Kyle to put her in midfield.  Unless they plan on giving Joanna Lohman a new position or a new team that seems an ominous plan.