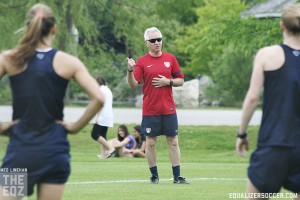 The United States women’s national team will play Australia on Oct. 20 at the Alamodome in San Antonio, Texas. The game will air live on NBC at 1:30 p.m. ET.

The Americans last played the Australians on Sept. 16, 2012, and Sept. 19, 2012, when Tom Sermanni coached the Matildas. The U.S., now coached by Sermanni, won those two games 2-1 and 6-2, respectively, in Pia Sundhage’s final games in charge. Oct. 20 will be the first game for Sermanni against his old team.

“It’s always a special occasion when you come up against a team you were [formerly] involved with, especially if it was significant as was my tenure with Australia,” Sermanni said. “It will be very interesting to be on the other side knowing the ability and the character of the Australian team. I know it will be a difficult game.”

Carli Lloyd wrote in a recent blog that the U.S. would meet in October for three games as part of a three-week camp. The Equalizer confirmed in early August that the U.S. will play New Zealand twice this fall.

The historic Alamadome is an indoor facility, marking the 10th time the U.S. women have played indoors. They are 9-0-0 all-time under a roof. The U.S. is 21-0-2 all-time vs. Australia.

Wolfsburg draws again in second game of season
The Lowdown: Breaking down the NWSL trades