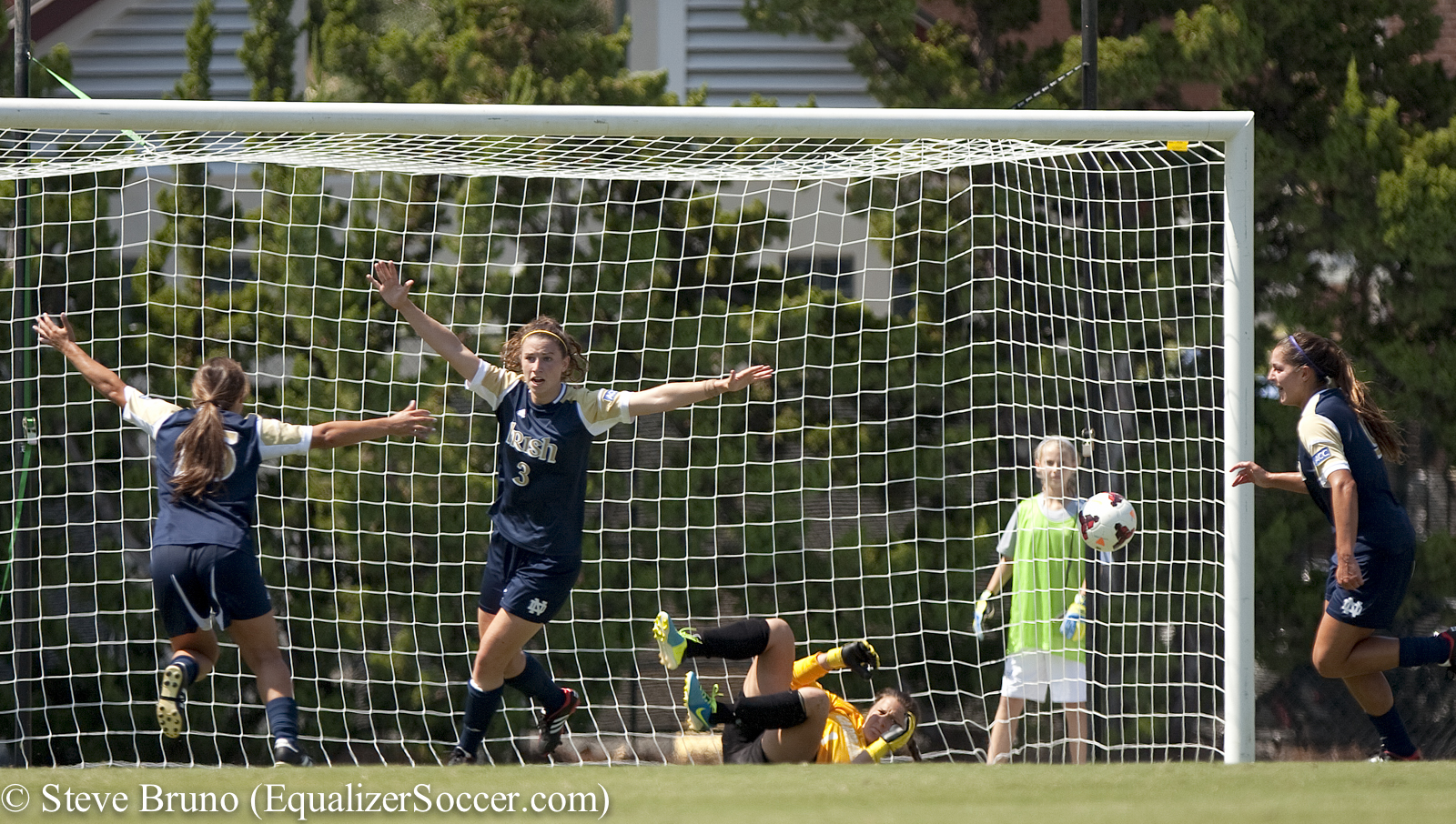 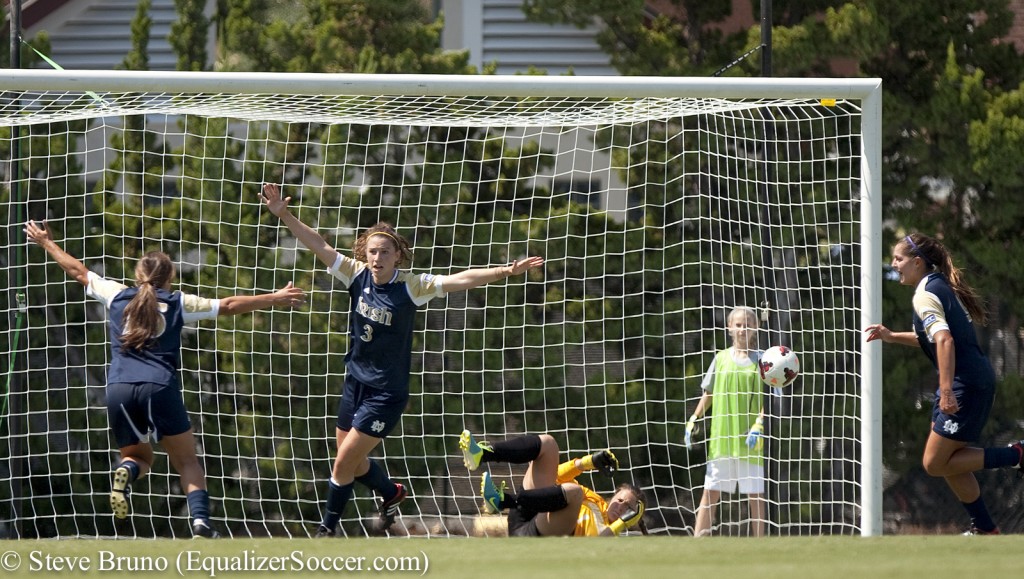 CHAPEL HILL, N.C. — Morgan Andrews’ header in the 22nd minute for Notre Dame stunned top-ranked and undefeated North Carolina as the Irish claimed a tough 1-0 road victory in a September classic that was the first-ever meeting between the two teams as ACC foes.

The goal came as the Irish were starting to find their feet in the game, following a wave of pressure from the Tar Heels that saw the team from South Bend pinned back early.

In just over a minute, Meg Morris had already penetrated the Irish defense, dribbling straight through to whip a shot just wide of goal for the first attempt of the match. Two minutes later, UNC took their first corner of the game as they continued to keep the pressure on the Irish.

In the 4th minute, the Irish countered, though, breaking through UNC’s backline as Carolina keeper Bryane Heaberlin came out to stifle the attack.

Despite the instant attack from the Tar Heels, Notre Dame gathered themselves and possessed the ball more as the half wore on, including one golden opportunity when an extended build-up culminated in a dangerous Carolina back-pass from defender Megan Brigman as Irish forwards swarmed in around Heaberlin, who rushed to clear it.

Notre Dame coach Randy Waldrum credited his team’s willingness to learn from their lack of offense in an earlier loss to UCLA, so far the only blemish on the Irish’s season, with their improved performance partway through the first half.

“We were better in the first half than we were in the UCLA game,” Waldrum said. “After about 20 minutes in the UCLA game, we kind of ended up sitting in like we did today for too long of a period of time and we weren’t able to really create anything effectively.” 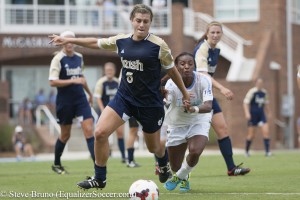 Cari Roccaro was magnificent for the Irish in shutting down Crystal Dunn in the midfield. (Photo Copyright Steve Bruno for The Equalizer)

As Notre Dame began to gain control of the midfield and press their opponent further back, Carolina coach Anson Dorrance subbed the tenacious Morris out in favor of defender Hanna Gardner, effectively switching from a 3- to a 4-back formation.

Carolina midfielder Crystal Dunn did her best to lead her team’s attack, but containment of the Tar Heels’ top goal-scorer was one of the primary objectives for Waldrum. He assigned that specific task to his most versatile player: Cari Roccaro.

“I thought Cari did a great job on Crystal,” he said. “Even though she got a few looks on goal, she didn’t get the kind of space and time that I think she’s used to having, so I think Roccaro, for us, was huge in kind of minimizing her effectiveness on the game.”

Dunn may still be hearing the pounding of Roccaro’s footsteps in the shadows, such was the tight and tireless marking of her former U-20 teammate. The two New York-raised midfielders battled furiously, with Dunn constantly seeking daylight and her nemesis lurking nearby at every turn, touch-tight and ready to slam the door shut.

The Big East Freshman of the Year performed her role with heroic grit and determination, but she had little choice. Twenty minutes into the first half, Dunn finally got some breathing room as Roccaro laid off just enough to allow her mark to dribble to the edge of the box, unleashing her first shot of the game: a powerful left-footed blast just high of the net.

Moments later, though, the Irish would make a return foray into the Carolina defense, earning a throw-in after Lauren Bohaboy’s attack on goal. Taken near the corner flag, Brittany Von Rueden’s throw was served back to her by a teammate and the defender returned service, delivering a long, high ball into the box. As the ball arced into the danger area, Andrews charged in to meet it squarely, sailing over two Carolina defenders to head the ball inside the right post past a scrambling Heaberlin.

The goal was Andrews’ fourth of the season and showed the poise of a polished athlete, not a freshman with less than two months’ experience at the college level.

“She scored a great goal for us,” the Irish coach said of his prized prospect. “There’s not a lot of players that are going to get up on that kind of a cross and score that goal.”

“She’s gotten better and better every week,” he continued, talking of her adaptation to play at the collegiate level. “I think she’s kind of caught up to the speed and physicality of the college game and, even when you play internationally, that’s a different game. It’s different than the college game, so I think after the first couple of games and she got her feet wet with it and she’s kind of learned her role a little more with us, she’s been really good.”

Trailing by a goal with just over 14 minutes left in the first half, Dunn again tried to make an impact on the game, swiping the ball in the midfield and busting through the Irish defense before being sandwiched by the centerbacks just north of the penalty box. The foul set up Joanna Boyles for a potential game-tying free kick similar to her strike against West Virginia the week prior, but the freshman was unable to put it on frame this time.

Another golden opportunity came in the last minute of the half as a loose ball pinged around inside the box, catching Notre Dame goalkeeper Kaela Little out of position, but the Irish were eventually able to clear it out to finish the period up by a goal.

Leading at the half, Waldrum said his young players were calm and composed at the break, knowing they still had a job to do over the next 45 before they could celebrate:

“The players were all very engaged. Tactically this was the first game we really got challenged a lot. Anson was going in and out of two different formations and then tried to pull Dunn outside some because she couldn’t get the ball centrally. It was kind of this chess match of, at halftime, trying to show our kids how to organize when they made the changes that they made…. For the most part, I think the kids did really well with it.”

From the whistle of the fresh half, UNC continued to bomb the Notre Dame box, again utilizing the aggressive play of Morris down the flank to drive through the defense.

Although Notre Dame wrestled control of the match away from the Tar Heels in the first half, the majority of the second half was dictated by Carolina as the home team pressured the Irish back four relentlessly, pushing the visitors to the limit.

A strong contingent of traveling faithful on-hand, chants of “Go Irish” rang out across the stadium while the home crowd retaliated with “Tarrr… Heeeels” as over 3,700 fans tried to tip the balance in the hotly-contested battle.

The game became more physical and intense for both sides with several decisions requiring a cool head from the officials. Fifteen minutes in, Paige Nielsen was isolated against Sammy Scofield in the box, when her legs became tangled with the centerback’s, sending Nielsen to the ground as a ball came in. A roar for the whistle came from the Tar Heel supporters, but referee Alex Sorondo rightfully held off. It was just one of a number of close physical challenges that had the Carolina fans and bench up in arms.

North Carolina were back at it seconds later. Dunn, driven around the perimeter of the box by the defense, still found a way to get a shot off on goal. She rifled the ball over the outstretched hand of Little, off the crossbar and down near the goal line. The on-the-spot call was that the ball deflected outside the goal line, but the hindsight of instant replay showed that, unfortunately, it had, in fact, crossed the line by a good distance. With no one at field level having a clear view of the bounce, play continued without protest from the Heels.

Although dismayed by his side’s lack of attacking response in the half, Waldrum was very pleased with their defensive efforts:

“That’s probably the disappointing thing is that we set back too deep and let them stay on top of us. Having said that, we were really good defensively and very well organized and always seemed to get a couple bodies around the ball… even around the box when they got things in dangerous areas we never really let them get a good, clean look at the goal.”

Carolina posted 11 shots in the second half, but only managed to put three on target. 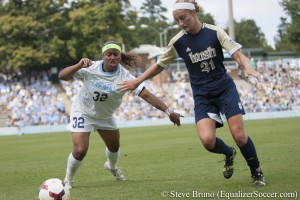 With eight minutes left on the clock, Dunn and Carolina redoubled their efforts, pressing harder against a Notre Dame defense that, aside from Von Rueden, played the full 90 minutes. Dunn had several more drives into the box, nearly connecting with Nielsen on one as the forward made a run into the box, only to be stuffed by Little who was anything but as she came out to snuff out the spark.

Just under the two-minute mark, Dunn connected with Kealia Ohai as she fed a ball through the center and into the box, but the Carolina forward was unable to put her shot on frame.

Carolina’s last chance came again through Dunn with 30 seconds left, as she took one final rip, firing a wicked shot from the top of the box, but directly into the grateful arms of Little.

The whistle blew to the delight of the Irish who were the first team to shutout the Tar Heels since October of last year, while those in Tar Heel Blue left undoubtedly feeling hard-done by the officials.

“Obviously, our game, you get some good luck, some bad luck,” Dorrance said afterward of Dunn’s phantom goal. “For us, that’s a little bit of bad luck. I’m certainly not one to think, as a result, we deserve to win or tie the game.”

For North Carolina, the team will have a chance to immediately respond to their first loss, facing a tough road challenge in a mid-week game against last season’s ACC Champions, Florida State. Meanwhile, Notre Dame have a single game on Thursday against ACC lightweights Syracuse as their wildly-successful 6-point North Carolina swing will have them shooting up in the next polls.