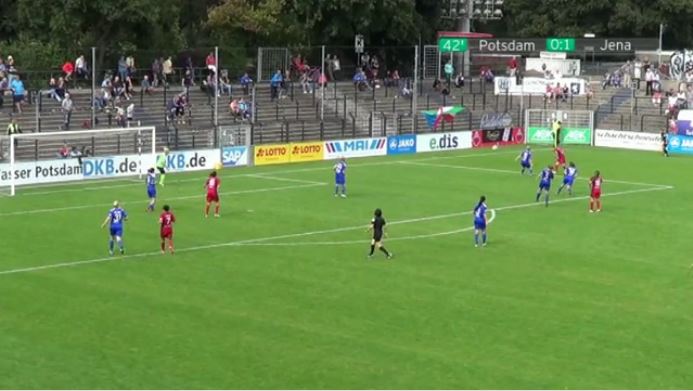 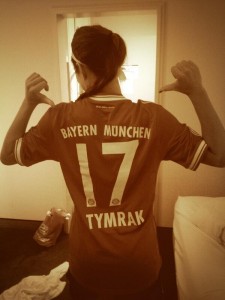 Erika Tymrak made her Bayern Munich debut on Saturday. (Photo via Twitter.com/eTymrak)

VfL Wolfsburg kicked off the 2013-14 Frauen-Bundesliga season with a 1-1 draw at home against Bayern Munich in front of 8,249 fans. Katharina Baunach opened the scoring for Bayern on service from American Sarah Hagen in the 15th minute, but last year’s treble winners pulled even in the 69th minute through Lena Goeßling.

The match marked the Bayern debut of FC Kansas City midfielder Erika Tymrak, who came on in the 70th minute. Amber Brooks, Nikki Cross and Hagen all started for Bayern.

“We were well organized and compact, have made a good game, with a little luck we could have won,” Bayern Munich coach Thomas Wörle said.

Also from opening weekend in Germany:

Watch all the goals here, including some sweet free kicks from Dzsenifer Marozsán for Frankfurt and Isabelle Linden for Leverkusen:

Notable news from around Europe:

England’s FAWSL: Arsenal Ladies and Bristol Academy didn’t do themselves any favors in catching league leaders Liverpool. The two settled for a 0-0 draw, leaving Liverpool (30 pts.) 3 pts. clear of Arsenal and five clear of Bristol, who have a game in hand. Liverpool and Arsenal have two games each to play, while Bristol has three. Liverpool plays Everton on Thursday in the Merceyside Derby.