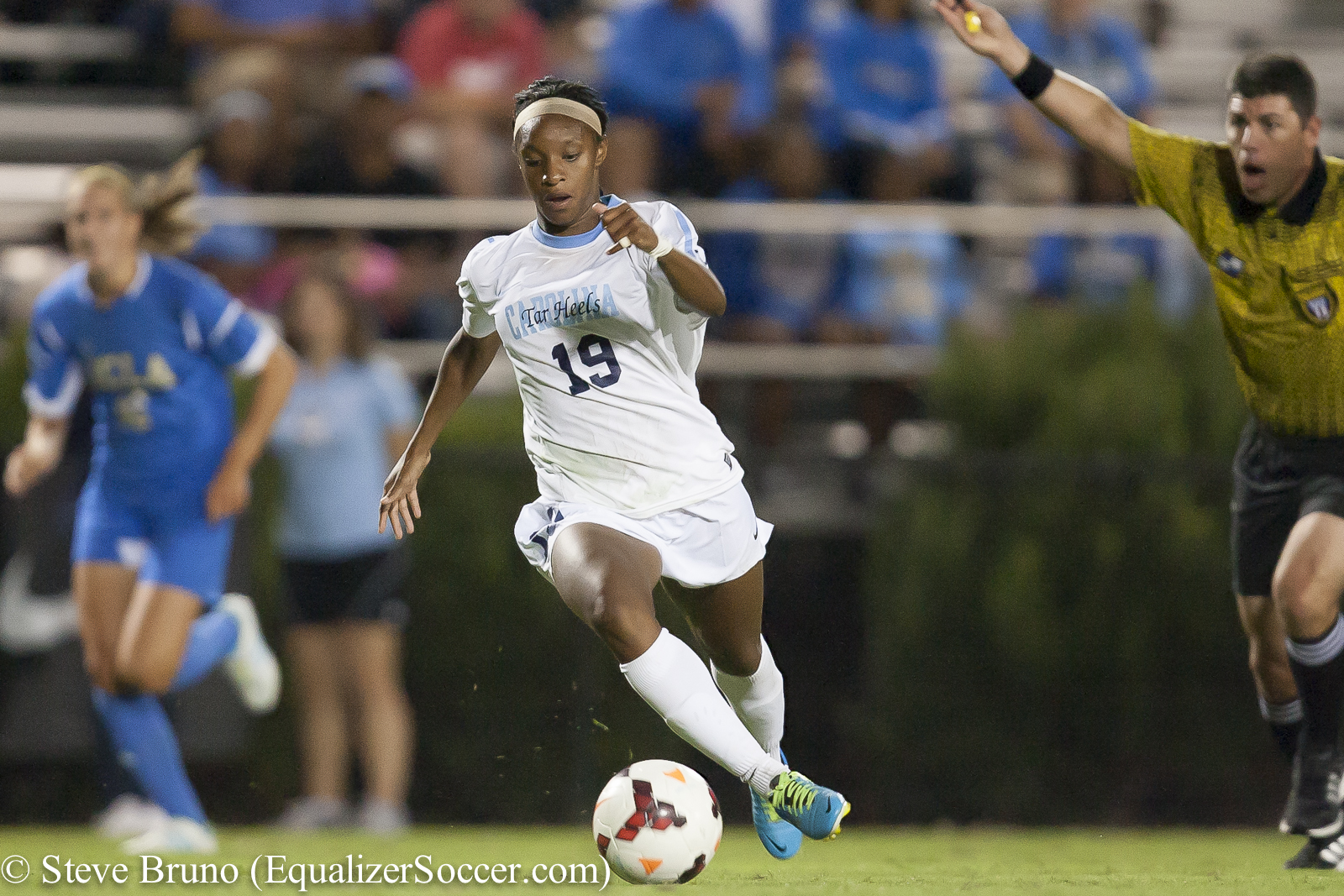 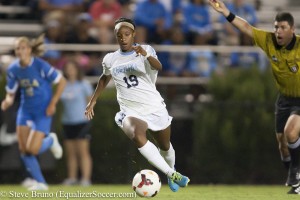 Crystal Dunn scored the game-winner for No. 1 UNC vs. No. 3 UCLA on Friday night. (Photo Copyright Steve Bruno for The Equalizer)

DURHAM, N.C. — A goal from Crystal Dunn with 11 minutes left in the game pushed the No. 1 North Carolina Tar Heels past third-ranked UCLA on Friday night. The centerpiece of the annual Duke Nike Classic tournament, it was a match that lived up to its billing, as the two undefeated juggernauts squared off in the proverbial ‘irresistible force vs. immovable object’ contest.

The Tar Heels declared their intentions immediately with their first shot on goal in just over a half-minute. Their offensive pressure was relentless and intense all evening, barely allowing the Bruins to push into their attacking half before the Carolina back line would beat them away.

“We were playing too direct at times,” said UCLA coach Amanda Cromwell, “being uncharacteristic in the way we turned over the ball, but that’s due to the pressure. We didn’t really play our game tonight because UNC took us out of it.”

UCLA’s defenders were on their collective back foot most of the night as the Bruins had a difficult time matching the speed and physicality of the Tar Heels’ attack. The centerback tandem of Abby Dahlkemper and Megan Oyster stood strong in the heart of defense while keeper Katelyn Rowland saved the Bruins’ bacon with a multitude of dazzling stops.

“Katelyn, our goalkeeper, was fantastic,” the first-year Bruin coach said. “She had a couple of big saves. In the first half I think we were fortunate to still have it at zeros.”

With the field tilted toward Chapel Hill most of the match, the Tar Heel barrage came from all players and angles. Rowland was forced into action for five saves off of 13 shots in the first half. The U-20 keeper’s most emphatic response to pressure came in the 28th minute as she rose to the task on a majestic long-range free kick from Georgia-import Alexa Newfield, rejecting the upper-90-bound shot with an equally impressive effort to preserve the scoreline.

“I was convinced it was headed in… that was an absolutely brilliant save,” UNC’s coach Anson Dorrance said of Rowland’s block. “One of the best goalkeepers in the upper corners I’ve ever seen.”

Although the Tar Heels put up an astonishing 23 shots on a UCLA defense that only allowed only one against No. 8 Notre Dame the previous week, Dorrance admitted a lack of discipline in the finishing department probably made the game a little more tense than necessary.

“If they would learn to shoot it low, they could ascend to the highest level, but that’s a tough thing,” the coach said. “We all think that the most important thing is power, we lose all sense of how we should be playing and then we just blast it and that’s what we did all game.”

Carolina continued to huff and puff in the second half and Dunn finally busted through in the 79th minute with a powerful run into the box to unleash a low, driven ball into the corner past Rowland. The highly-partisan crowd from Chapel Hill roared as Dunn clenched her fists, releasing a fiery scream before her teammates smothered her.

Despite saving all her scoring for the Tar Heels’ NCAA run last year, Dunn isn’t wasting any time this season in making a bid for her second consecutive MAC Hermann trophy, with a team-leading five goals in four games, two of them game-winners.

After the game, Dorrance was effusive in his praise for his attacking midfielder, who is fresh off another cap with the U.S. national team, which drew more plaudits, albeit for her performance as an outside back.

“I think because of the talent they have right now, her home for a while is going to be right back, but if any of the pro coaches put her there,” they shouldn’t, he said of her position on the national team versus a potential future in the NWSL.

On what makes her so uniquely dangerous in midfield, Dorrance said:

“It’s not because she’s a brilliant passer of the ball or a tactician. She is an absolutely extraordinary dribbler, and it’s not like a classic Cristiano Ronaldo where she’ll do 27 stepovers. What she’ll do is she’ll touch the ball in some direction and, because she’s so incredibly quick and athletic, she beats almost every player to it and when they challenge her, she’s got such good lower-body strength, she rides tackles as well as any player I’ve seen in the world… She will create havoc at a professional level.”

With just over 10 minutes on the clock, the Bruins’ situation became desperate. Not willing to concede a loss in spite of a fairly lopsided game to that point, they pushed forward with great intent, even getting center back Dahlkemper into the attack for sustained periods.

“We were in panic mode,” Dorrance said of the closing stages after they scored. “They’re all running around like chickens in an improper shape and, as a result, UCLA took over while we’re trying to milk the clock.”

Despite a few shots in the dying minutes, UCLA were unable to capitalize on Carolina’s lack of organization and closed out the night with their first loss of the season.

“UNC’s such a fast, athletic team,” Cromwell said afterwards. “They put you under so much pressure, that we’re used to keeping more of the ball and we had a hard time tonight finding our midfield, changing the point of attack and that’s what you have to do against them.”

“They’re fast and they’re quick to anticipate second balls, so we have to be better at just anticipating winning certain balls…. we have to do a lot better job of reading it, getting our body in the right spots, getting our starting positions better so it doesn’t turn into a foot race.”

For the Bruins, they won’t have to wait long to rebound as Sunday they face a No. 12 Duke side that has been a shell of their former offensive selves this season.

“It’s the end of a 12-day road trip for us, so our legs are going to be tired. It’s really about recovery and trying to get back to play our game,” Cromwell said.

Asked if the team is beginning to coalesce under her first year of leadership, Cromwell responded:

“This trip has done that. We’ve had some really good team-bonding activities… It’s a really good atmosphere, the chemistry’s good and I think, sometimes, a game like tonight, you need that to really learn some things about the team that we need to work on, so we’ll take the positives out of it and we’ll grow and hopefully have another crack at them if we see them somewhere down the road”

Dorrance’s Tar Heels will close out the tournament on Sunday afternoon facing another ranked opponent in West Virginia, a team which has yet to lose a game and gave Duke all they could handle in a double-overtime draw earlier in the evening. A win on Sunday would see the Tar Heels entering the brutal conference season undefeated.

“Obviously we’re absolutely ecstatic to be in this position, beating a tremendous team coached by a really good friend of mine,” Dorrance said of the victory over UCLA and Cromwell, a player he coached on the national team. “She’s really organized herself a wonderful team and we feel really excited to have escaped 1-0. I want to congratulate her and her fine staff and also her kids, they made it very hard for us, but I’m certainly absolutely thrilled to be in this position, still undefeated five games in.”