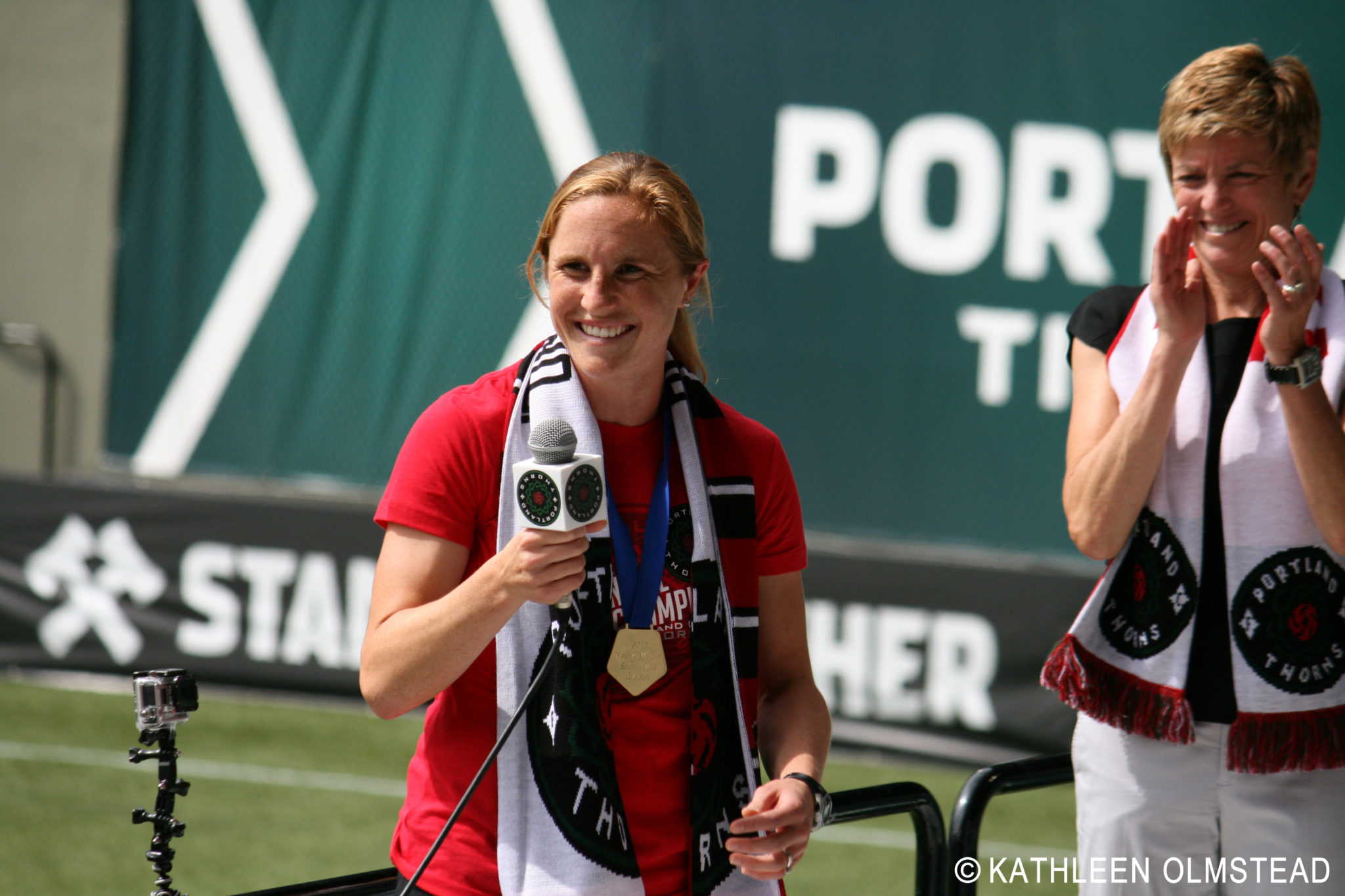 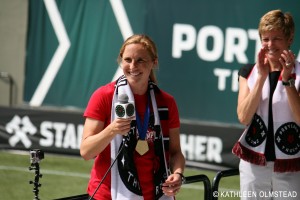 Rachel Buehler flew back from DC to celebrate the NWSL Championship win with fans. (Photo copyright Kathleen Olmstead for The Equalizer.)

The players of Portland Thorns FC returned to PDX Airport on Monday and were greeted by several hundred fans decked out in red, holding signs, and chanting.  Today was the slightly more formal celebration of Portland’s first professional sports championship since 1977, with players being recognized by the Portland City Council, then heading to JELD-WEN for a celebration with fans.

First a few members of the team were recognized by the Portland City Council. Karina LeBlanc, Mana Shim, and Kat Williamson received the official proclamation from the city that honored the team.  Even the city council made note of Portland’s reputation as Soccer City USA:

“Now therefore Charlie Hales, the Mayor of the City of Portland, Oregon, the City of Roses, and Soccer City USA, does  hereby proclaim Wednesday, September 4th, 2013 to be a day of recognition for the Portland Thorns FC, champions of the National Women’s Soccer League, and we encourage all residents to observe this day.”

At least two hundred people were waiting at JELD-WEN for the team and the noontime celebration (owener Merritt Paulson admitted on Twitter the awkward time was due to player availability).  Paulson, head coach Cindy Parlow Cone, as well as Rachel Buehler and LeBlanc made brief speeches thanking the fans.

Buehler was a notable addition to the players who were able to make it, considering she had played in Tuesday’s match against Mexico in Washington, D.C.  Her fellow national team teammate Alex Morgan was featured in a pre-recorded video shown to the crowd.

The Mayor of Portland, Charlie Hales, also attended the ceremony at JELD-WEN, and spoke to the crowd sporting a Thorns FC scarf.  The ceremony also included a number of videos, including a season montage.

It’s just the latest display by Portland Thorns FC fans, including the Rose City Riveters, that proves dedicated supporter’s groups for women’s soccer can thrive in the right conditions.  It’s still a leap for any of the other seven teams in the league to reach Riveters standards, but the offseason prior to the 2014 season could be valuable time to catch up to the league leaders, on and off the field.

The entire ceremony can be watched online in its entirety on Youtube.