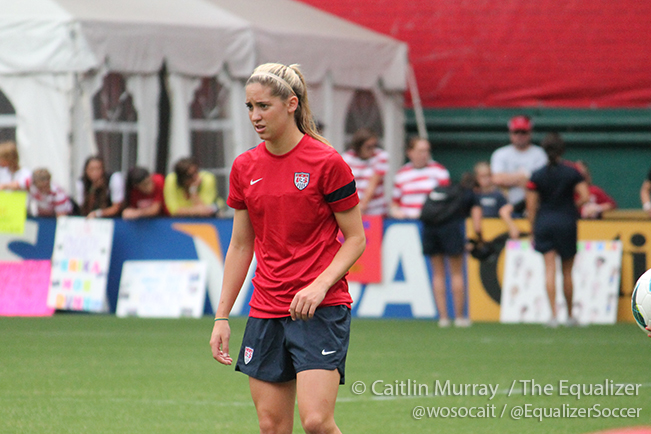 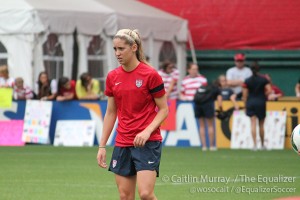 The U.S. roster for the game against Mexico looks a good bit different than fans are used to seeing. On a team known for having a solid core of veteran players, a full third of the players included in U.S. head coach Tom Sermanni’s roster have six international caps or less. The youngest of these new faces, midfielder Morgan Brian, is a 20-year-old junior at the University of Virginia.

Brian got her first cap with the senior team back in June but tonight’s game in D.C. will be pretty special for her as well. Brian’s Virginia teammates are making the 2.5 hour trip from Charlottesville, Va. to support her.

“I think the whole team is coming up on Tuesday and they’re going to have a tailgate here with a bunch of the parents. I think about 70 people will be there.” Brian said excitedly before Monday’s open practice.

If all goes well, perhaps her Virginia teammates may get more opportunities to see her compete internationally.

Former Virginia Cavalier and current U.S. defender Becky Sauerbrunn was complimentary of Brian on Monday. “You can tell that she has a high soccer IQ, great touch, and sees the field really well,” Sauerbrunn said.

Sermanni has also been impressed by was he has seen in the youngster so far, calling her “terrific.” What has stood out to him the most about Brian is her confidence. He recalled a conversation he had with Alex Morgan during the team’s last camp in which Morgan admitted she was amazed by Brian’s confidence, remembering how nervous she herself was when she got her first call up.

“She was just outstanding and you could tell within two or three days the confidence that other players had in her was borne out by the fact they would just give her the ball” Sermanni said. “Quite often somebody new comes in you need to sort of earn your stripes before players are comfortable passing the ball to you…Within a couple of days, she was getting the ball and dominating games.”

Sermanni’s not the first coach to notice Brian’s confidence. Brian’s college and U-20 head coach Steve Swanson said that Brian has never been “wide-eyed, like a deer in the headlights” at Virginia.

Perhaps some of Brian’s confidence comes from the fact that she’s spent most of her life playing on teams with significantly older players. As an eighth grader, she played on her school’s varsity soccer team and she was the youngest member of the U-17 Women’s World Cup squad back in 2008.

When asked about her remarkable confidence, Brian said, “I’ve been the kind of person that when I come into a new environment I’m relaxed. Not a lot of things make me nervous or anything like that so I’m pretty comfortable playing these players. They’ve made me feel comfortable as well. I think just coming in and telling myself to be confident, that’s how you’re going to succeed at this level.”

Brian may get another chance to showcase her skills Tuesday when the U.S. takes on Mexico at 8 p.m. ET. The match will be broadcast on Fox Sport 1.