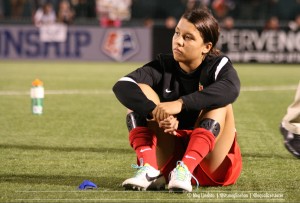 ROCHESTER, N.Y. – Aaran Lines said he had a feeling on Saturday like he hasn’t had all season.

Western New York had no shortage of opportunities. From Sam Kerr’s 12th minute header that Thorns goalkeeper Karina LeBlanc tipped off the crossbar, to Carli Lloyd’s 27th minute attempt that pushed just wide of the far post, the Flash fired 18 shots toward LeBlanc. But as Lines alluded to, the finishing wasn’t there; the Flash put just seven of those shots on frame.

Lines implemented his personnel well throughout the season, letting 19-year-old Sam Kerr play wide and high alongside Spaniard Adriana Martin, with Wambach in the middle.

Both Martin and Kerr saw a good deal of the ball on Saturday, but mainly from central positions. Sarah Huffman got forward at times from her left back position, but Katherine Reynolds was largely contained on the right side.

“We couldn’t get into the wide areas as effectively as we’ve done in the past,” Lines said. “They did a good job of neutralizing Reynolds on the right.

“I just felt that our final ball tonight, we just tried to force things. We needed to be more patient.”

At times there wasn’t much wide play or possession to be had. By the 3rd minute tackles were flying in from the side and behind, leading to an on-the-ground scuffle at midfield between the Flash’s Angela Salem and Portland’s Kat Williamson, who was sent off in the 57th minute for a second yellow card, bringing down Wambach for the second time in eight minutes.

The physical tone continued throughout the night – a tone both Flash and Thorns players said they wanted to set coming into the match.

But for Western New York, whose play from Wambach, Kerr and Carli Lloyd has shined throughout the season, the strategy didn’t work against a Thorns team that matched and exceeded such gritty play.

“I think that’s the way we’ve been playing for the last couple of weeks, couple months in fact. We thought that if we won that physical battle in midfield, that would nullify their four vs. three for us.”