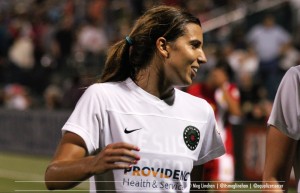 Tobin Heath admitted her right foot was less than 80%. It didn't stop her from using it to help the Thorns win the NWSL Championship. (Photo Copyright Meg Linehan for The Equalizer)

Rochester, N.Y. — The most talked about appendage in women’s soccer this week turned out to be the one that decided the National Women’s Soccer League champion.  Tobin Heath’s right foot, injured during last weekend’s semifinal win over FC Kansas City, unused through a week of training sessions she did not participate in, was feeling well enough on Saturday to take her place in Portland Thorns FC’s starting XI.

In the 40th minute of what was surely the most physical of the seven professional women’s finals played stateside, Katherine Reynolds was whistled for a foul in the dangerous if not alarming range of 36 yards from the Flash goal.

Heath and Marian Doughterty stood over the free kick.  Christine Sinclair asked Heath about the plan and was told to, “stand in the wall and like kind of give the goalie a hard time.”  Dougherty asked the same question and Heath said, “You can stand there and look pretty.”

Sinclair and Dougherty did as they were told.  Heath did exactly what she wanted.  She took five steps forward and used the right foot she later admitted was less than 80% to drive a majestic ball over the wall and into the upper left portion of the goal.

The strike helped Heath take down MVP honors despite doing little else in terms of attacking the rest of her time on the pitch.  And it sent a collective gasp through Sahlen’s Stadium where the 9,129 on hand were on the way to something unusual—a home side loss in a title game.  The goal also drew rave reviews from Heath’s fellow Thorns.

“World class,” Thorns coach Cindy Parlow Cone said.  “I don’t think anyone knew she was finishing including myself.  I don’t think her teammates knew either because she has great service so she usually serves that ball in.  But just a fantastic strike.  I think the ball was moving all over the place.  I can’t wait to see a replay of it.”

“How awesome was that goal,” Tina Ellertson exulted.  “She has an amazing right foot.  She’s an amazing player.  It doesn’t get any better than that.  Gave me chills.”

And the opposing coach? “It was a world class strike by Heath,” Flash coach Aaran Lines said.

“It was shot all the way for sure,” Heath said.  “I knew I would have limited opportunities and as soon as I saw the free kick in that spot I knew that I wanted it.  I was pretty confident when I stepped up.”

Heath’s goal carried the day until Christine Sinclair put it away in stoppage time, to shut-out the Flash 2-0.  But it was hardly the only important play of the night.  In fact in an odd twist, rookie Kat Williamson being sent off in the 57th minute was a blessing in disguise as her first yellow denied Abby Wambach a 1-v.-1 chance at Karina LeBlanc.

“After the game I said, ‘Hey Kat you did exactly what we needed you to do,’” LeBlanc said.  “Any player, after you get sent off obviously she’s feeling guilty.  But that was a huge play for us.”

In the early stages of the match, when the Flash were the ones pushing the play, Carli Lloyd snuck behind the Thorns defense and looked to go 1-v.-1 on LeBlanc.  The Canadian keeper—she wore a Canadian top hat in the post-game celebration—chose the exact right moment to vacate her line and was able to smother it

“It was one of those decisions either I go out or I just drop back in my line and hope to make the save,” LeBlanc said.  “Those are the things that as a keeper you make the quick decision and hope it works out in the end.”

The Thorns had a fascinating arc to their season.  Many anointed them before they even went to training camp.  A summer of struggles found the bandwagon running on empty outside Portland.  When they trailed 2-0 to FC Kansas City in the semifinal there were not many lined up to get back on.  Yet Saturday night in Rochester the Thorns won the NWSL Championship and wrested away the perpetual trophy that has lived in Rochester since 2010.