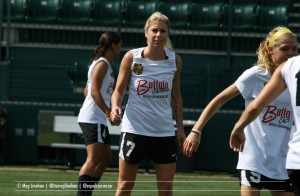 WNY Flash midfielder and captain McCall Zerboni has been critical to the team's success the last three years. (Photo copyright Meg Linehan for The Equalizer)

ROCHESTER, N.Y. – McCall Zerboni finds herself in a similar position as the past – an unsung but vital piece of the Western New York Flash’s midfield.

She was a utility player for the 2011 Flash team that won the WPS title, tallying four goals and three assists in 14 games while playing just about every role on a team with Alex Morgan, Christine Sinclair and Marta.

Zerboni missed the last two games of the 2013 regular season with a right calf strain before coming on as a substitute in the 79th minute of the Flash’s 2-0 semifinal win over Sky Blue FC. Before that Zerboni, the Flash’s captain, started all 20 games for Western New York.

She trained on Friday with medical tape supporting her right calf, but said she feels good and is ready to play in Saturday’s National Women’s Soccer League Championship against Portland Thorns FC (8 p.m. ET, Fox Sports 2, Fox Soccer and foxsoccer2go.com).

The importance of the 26-year-old to the Flash shouldn’t be understated, exactly why coach Aaran Lines named Zerboni his captain in 2012, a title she carried over into the move up to the NWSL.

“It’s difficult to be in the position that I am right now, sitting on the sidelines, but leadership comes in many forms,” Zerboni said. “That speaks for our team as well. We have a lot of leaders on this team, whether they are deemed captain or not. It takes all different kinds of leadership and sometimes things come that you are not expecting and you just have to find different ways to lead the squad.”

Those leaders both vocally and by example include Carli Lloyd and Abby Wambach, who formally assumed the role of captain in Zerboni’s absence. Lines praised the core of his team, calling them the best group of senior leaders he’s had in this now his fifth season as Flash head coach.

And while Wambach and the health of Portland’s Alex Morgan and Tobin Heath will draw the headlines, Zerboni’s inclusion in the side – and presence within the team – has been a one of the more underappreciated components of the Flash.

“McCall’s done a great job,” Lloyd said earlier in the week. “I think McCall, Ang(ela Salem) and I have definitely continued to figure out how one and other plays in the middle. Up until McCall got hurt we had a good chemistry going in the midfield.

“And McCall’s a fighter. She wants to win and she’s obviously been through these championship situations before and been a great leader. Her and Abby – they are leading, getting us pumped up before the game. It’s been fun to play with her.”

The only question surrounding Zerboni is whether or not she’ll start on Saturday, which remains to be seen.

Alex Morgan’s ‘The Kicks,’ from a young player’s view
Flash defense not missing a beat with Huffman