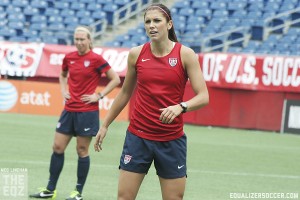 Alex Morgan says she should be ready to play in Saturday's NWSL final. (Photo copyright Meg Linehan for The Equalizer.)

The inaugural National Women’s Soccer League Championship may just be Abby vs. Alex after all.

Alex Morgan told OregonLive.com that she’ll “be 100 percent for sure by next Saturday” for Portland’s championship showdown with the Western New York Flash in Rochester, N.Y. The Thorns forward hasn’t played since August 7, when she sprained her left MCL in Boston.

Morgan was available on the bench for Saturday’s 3-2 extra time semifinal win over FC Kansas City, but did not enter the game as a precaution. Thorns coach Cindy Parlow Cone said “Alex was a possibility (to play) the whole game.”

With Alex Morgan, this championship is a different game. Now let’s all hope Morgan is healthy enough to play in the final without further injuring herself.