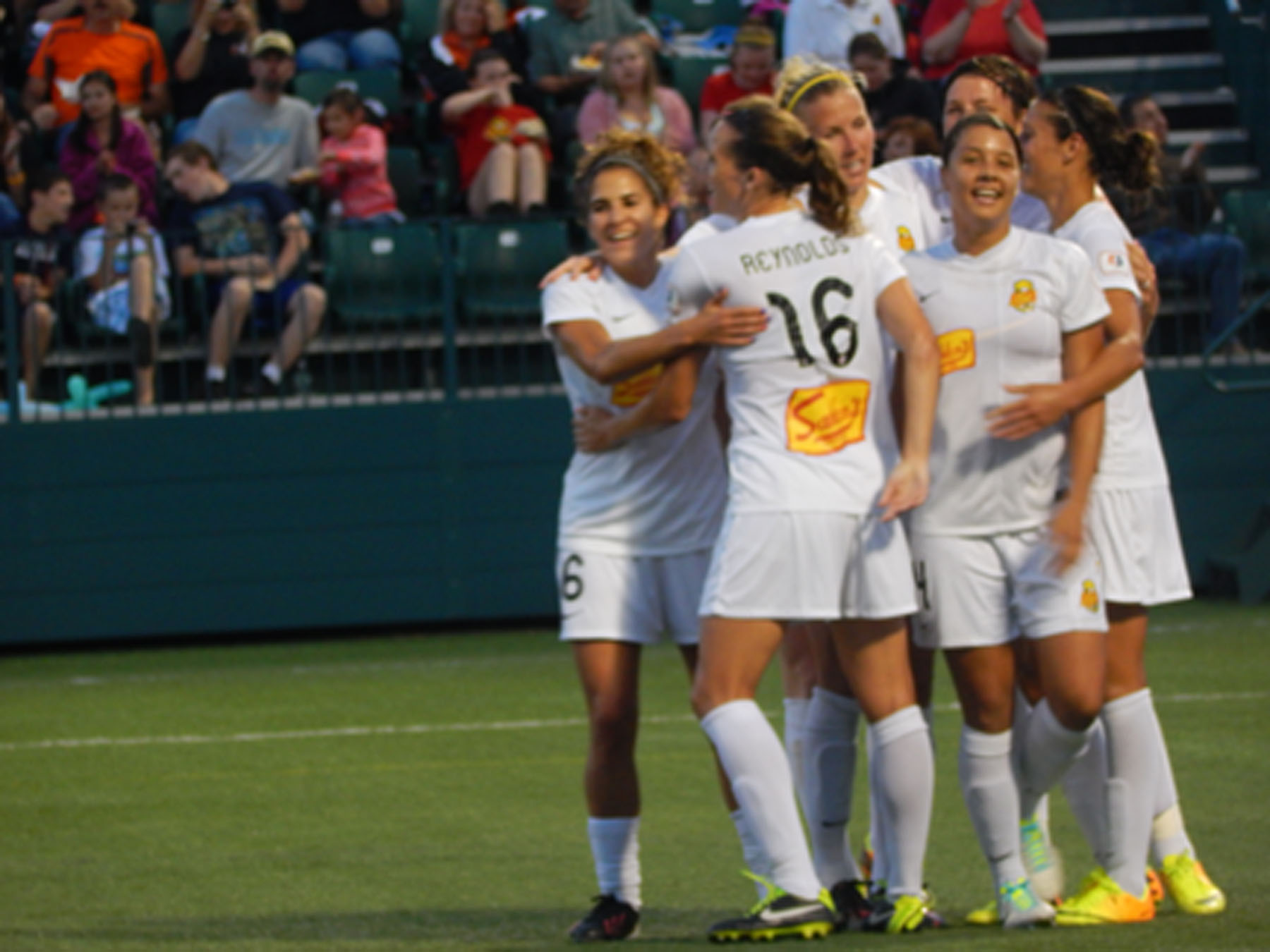 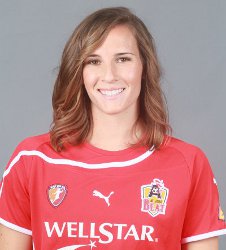 Katherine Reynolds was the final starting defender to arrive in Western New York.

Sometimes you just have to play the hand you’re dealt. And play it Western New York did.

“We weren’t given any defenders in the allocation.”

That was part of Aaran Lines’ answer Thursday morning when he was asked about his back four, a group that came together somewhat unexpectedly and has been the lifeblood of a Flash team that sneaked into 1st place on the last weekend of the season.  That secures the club a home semifinal vs. Sky Blue FC (and the assurance of hosting the final if they can get there – not insignificant for a team that has not lost at Sahlen’s Stadium since dropping the home opener back in April.

“I think all of us were watching,” Abby Wambach said of FC Kansas City’s Sunday loss that allowed the Flash to finish 1st.  “The outcome of that game changes a lot of stuff.”

But back to the defense, Lines was not just posturing with his comment.  The Flash are the only team in NWSL who never used an allocated player on defense.  Lines had to build the entire thing from scratch.

“We had to go out and put the pieces together ourselves there,” Lines said.

In doing so, Lines was forced to take players and put them in positions they had not seen for a few years, and he had to ask others to play at a higher level than they had before.  The college draft was light on defenders, but Kat Williamson and Rachel Quon were on the board when the Flash’s spot came up 6th overall.  They took goalkeeper Adrianna Franch instead.

“AD Franch was a gamble going into the season,” Lines said.  “She’s a good player—great player—from a small program (Oklahoma State).  We went with her and it has paid off.  Til this point now she has been absolutely tremendous.”

Franch, though, does not play defense.  Free agency was next.

“Brittany Taylor was a free agent signing and a no-brainer for me,” the coach recalled.  “I watched her for the last couple of years and always thought she had the potential to be a fantastic center back.”

Taylor was all too happy to play in the center of the park—“I like it a lot, especially at the top level,” Taylor said earlier this season.  “You’re put in a position where you need to control and kind of be a general back there and organize.”—but she had spent precious little time there as a pro.

The Flash also nabbed Alex Sahlen in free agency.  Sahlen is Lines’ wife (just don’t make a big deal about it) and is the only player to have been part of all three of the team’s championships.  But the bulk of her play had been when the Flash played in lower leagues.  Sahlen was a deep bench player during the 2011 season, the team’s run through WPS to a title.

“Alex has put in a tremendous amount of work over the last couple of years,” Lines said.  “In 2011 she played two games on a very, very good squad.  We worked her out in the off-season and felt that she was ready to have a bigger impact on the team.”

The Supplemental Draft was up next.  Lines wanted Estelle Johnson, who was on teams the Flash vanquished in the playoffs the last two years.  “I was shocked,” he said, “that she was there with the 7th pick.  I’ve obviously watched her over the years with Philly (Independence) and thought that she had all the qualities of a center back.  Right there the center of defense was put in place.”

Taylor and Johnson have not disappointed as the Flash’s center back pairing.  Neither did Sahlen until a plantar fascia tear ended her season.

The last piece of the puzzle was Katherine Reynolds, who parlayed her 2012 season with the Flash into a move to Germany.  Bypassed in the Supplemental Draft because of her contract with Freiburg, Reynolds was able to make an on-time arrival with the Flash after the club successfully pried her away early.

Those four defenders—Sahlen, Taylor, Johnson and Reynolds—started the first 17 games of the season next to each other before Taylor missed a game through injury.  Sahlen went down in the next match and was replaced by Sarah Huffman.  The transition to Huffman has been virtually seamless.

“The back four have been the stability of our regular reason success this year,” Lines said.  “I should say back five.  I need AD Franch included in there.”

The group combined to concede two goals—one an own goal—to Sky Blue over four matches this season.  But it will all be for naught though if they can’t contain them again Saturday evening and move on to the final, where the Flash would look to win their fourth championship in a row, all in four different leagues.

“Everything we’ve worked for up until this point is on the line on Saturday,” Lines said.  “It’s an exciting time for us as we lead into it and continue towards playing a very good Sky Blue team.”

The Equalizer is previewing all the landscape of all four NWSL playoff teams ahead of Saturday’s semifinals. For the perspectives of the other matchup, click here for FC Kansas City’s goal of turning around momentum and click here for how Portland Thorns FC is dealing with question marks.

Megan Rapinoe to play for Lyon during 2013-14 season, return to Seattle Reign FC in June 2014
NWSL Playoffs: How, when and what to watch