Question marks remain for Thorns ahead of playoffs 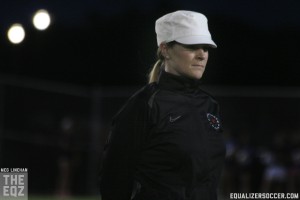 Despite being the No. 3 seed, Cindy Parlow Cone and Portland Thorns FC carry the pressure of championship expectations. (Photo copyright Meg Linehan for The Equalizer.)

Luckily for Portland Thorns FC, they aren’t the only ones limping into the NWSL semifinals.

Portland travels to face familiar foe FC Kansas City on Saturday (2 p.m. EDT on Fox Sports 2 and foxsoccer2go.com) in a game of two teams not necessarily entering the playoffs with positive momentum.

FC Kansas City fell into a three-way tie — and ultimately 2nd place — after a last-second loss to the Chicago Red Stars in the final game of the regular season. It was the third time this season the Blues had collapsed after the 85th minute, a worrying sign for Vlatko Andonovski’s side.

But the Thorns aren’t exactly rolling. They are unbeaten in their last two matches, but that includes a lackluster 0-0 draw on the road against the Western New York Flash, three days after losing to a Boston Breakers side that didn’t make the playoffs. That game is also when Alex Morgan sprained her left MCL. The status of her injury will hang over this game up until kickoff (she is a game time decision).

This all comes after a season loaded with expectations, lofty and unrealistic as they may be. Portland struggled to connect until the midseason arrival of Tobin Heath, and the perceived lack of cohesion that sounded more like reality after Danielle Foxhoven’s comments in early August after a 3-2 home loss to, you guessed it, FC Kansas City.

“I don’t exactly know what Dani was alluding to,” Thorns forward Christine Sinclair said in a national conference call. “I think we are a very close team. I think every team throughout the league has gone through their ups and downs. No team has completely dominated from start to finish this year. Our team is just like any other team; we went on winning streaks and we went on losing streaks. We have some senior members of the team that try – it’s all about trying to keep those losing streaks and those down times to a minimum and I think we’ve rebounded very well.”

Without Morgan the last two games, the Thorns played less direct—their biggest issue all season was a midfield that got bypassed and left Morgan feeling “alone” up top—and Sinclair played in more of a natural role. She has frequently been forced into a deeper lying midfield role in previous months just to find the ball.

But Canada’s all-time leading goal scorer said her role isn’t that much different, whether Morgan can play or not.

“Obviously, any team is going to miss Alex if she is not able to play,” Sinclair said. “For us that first thing you miss is that one ball in behind that no one can keep up with. These past two games, we’ve adapted and I actually think we’ve built up play better than we have all season, just because we haven’t been able to rely on that ball in behind. Obviously we hope Alex can play and we can combine both methods of attack. That would be the ideal scenario.”

And Portland coach Cindy Parlow Cone finds encouragement in knowing that her backline, which showed signs of cracking in July, has recently re-established itself.

“We’re just playing with much more team cohesion,” Cone said. “And I think the biggest thing for us, especially in the past two games, is that we’re much more solid defensively. We’re not giving up the number of goals that we were giving up in the middle of the season.”

Kansas City, which is 2-1-1 this season against Portland (1-0-1 at Verizon Wireless Field), has scored nine goals in four games against the Thorns this season. League MVP candidate Lauren Holiday has five of those goals. Much of the defensive game-plan will come down to containing Holiday, who both Cone and Sinclair called one of the best U.S. internationals.

If the Thorns can do that, they’ll have either a trip to Rochester, N.Y., for next weekend’s championship or the outside shot of hosting a beaten up Sky Blue FC team at JELD-WEN Field. Anything short of a championship, though, will be a disappointment for this club carrying superstar weight.

The Equalizer will profile each of the four NWSL playoff teams ahead of Saturday’s semifinal games. Tomorrow: Western New York Flash and Sky Blue FC in the other semifinal.