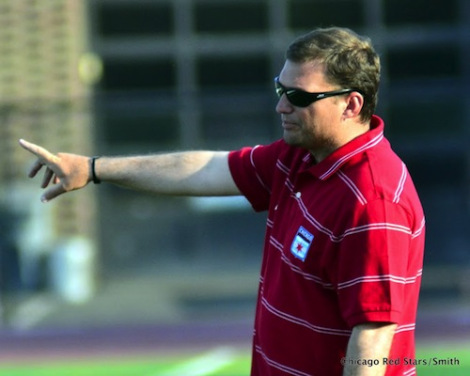 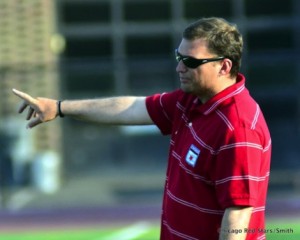 FC Kansas City were two minutes from a draw that would have earned them first place overall in the NWSL playoffs when Jen Hoy’s second goal of the day gave the Red Stars a dramatic 2-1 victory.  The stoppage time dagger dropped the Blues to 2nd place and sends them to the playoffs on a two-match losing streak.

The Flash, who won their season finale on Saturday night, claim the top spot in the league.  The Blues will still be at home next weekend against Portland Thorns FC.  The Flash will host Sky Blue FC who drew 1-1 at Washington later Sunday.

Adding injury to insult, FC Kansas City lost Leigh Ann Robinson to a knee injury early in the match.  The outside back played every minute during the season’s first 21 games but went down in the opening minutes on Sunday.  Robinson played on briefly before taking a knee and being replaced by Courtney Jones.

It was Jones who gave FC Kansas City an early lead after the Red Stars gifted Erika Tymrak all the space she could have wanted for a run down the left side.  As Red Stars defenders moved to close down Tymrak, Jones was freed to take the pass in front of goal.  Erin McLeod got a hand on Jones’s shot but it squirted free and in near the left post.

The Red Stars tied it just before halftime.  Hoy took the ball from Desiree Scott in midfield and worked a give-and-go with Inkra Grings, finishing the return pass into the upper 90.

The Blues scuffled through much of the 2nd half, often missing the crisp passing and defensive organization that sent them to the top of the table.  They paid for it in the 92nd minute when five different Red Stars touched the ball in buildup with Julianne Stich finding Hoy on the left for the shot.  It beat Nicole Barnhart at the near post to give the Red Stars the win.  The goal conceded also cost Barnhart the league lead in goals against average to Flash rookie Adrianna Franch.

FC Kansas City (11-6-5, 38 pts.) will host a playoff game next weekend while the Red Stars (8-8-6) finish 6th and will hold the 2nd and 3rd picks in the 2014 draft (barring an expansion shakeup).  The Red Stars finish 2-1-1 against the Blues in the first year of the Midwest Melee.  Earlier this season they scored two stoppage time goals while playing with 10 women to earn a 3-3 draw against FC Kansas City.