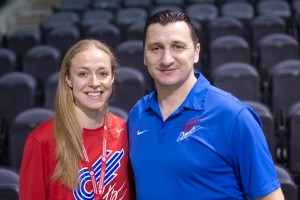 Two games left in the NWSL season and the results will tell us who plays who in next weekend’s semifinals.  We know FC Kansas City and Western New York will host Portland and Sky Blue FC, who the matchups are still up in the air.  Here is a closer look at the remainder of the Week 19 action in NWSL:

Quick Look:  The final edition of the Midwest Melee for 2013 will be the deciding factor in which team wins the NWSL’s regular season.  The Blues need just a point to finish top while a loss would see the Western New York Flash take the spoils.  Last time these two played was a barnburner.  FC Kansas City took a 3-1 lead in the 87th minute and Taryn Hemmings took an injury on the play, forcing the Red Stars to go the rest of the way with 10.  No matter they scrapped and clawed for two late goals and escaped with a 3-3 draw.  Both teams need a win to play claim to the season series between the league’s Midwest entries.

Tactical Short:  This one represents a big contrast in style.  The Blues play a possession game than can bring opponents to their knees by the latter part of the match while the Red Stars play a more direct, physical style, partly due to a rash of injuries to their key players.  But they do have players who are able to disrupt things in midfield, namely Leslie Osborne and Julianne Stich.  The Red Stars will need strong performances in that area to stand a chance of containing FC Kansas City’s attack.

Quick Look:  The Spirit are suddenly riding the wave of a two-match winning streak and will look to end a disappointing season on a high note.  Sky Blue started the weekend with thoughts of a home playoff match, but Saturday’s results ended those hopes.  Now they face an interesting scenario wherein a positive result could be a negative since they have been blitzed three times this season by the Flash, one of two potential playoff opponents.  A two-goal win where they score at least three will vault them to 3rd place and an outside shot to host the final but they still have no say in who finishes 1st and 2nd.

Tactical Short:  It will be interesting to see if Jim Gabarra decides to rest some of his battered troops rather than go all out to win a match that has little meaning in the standings.  They’re still trying to figure out right back in the absence of Caitlin Foord and they are without Brittany Bock again for this one.  The Spirit have scored multiple goals in a game only twice this season and there is a good chance they’ll need to do it again to win a third straight.  Their new midfield shape has paid dividends and could keep Sky Blue off balance.