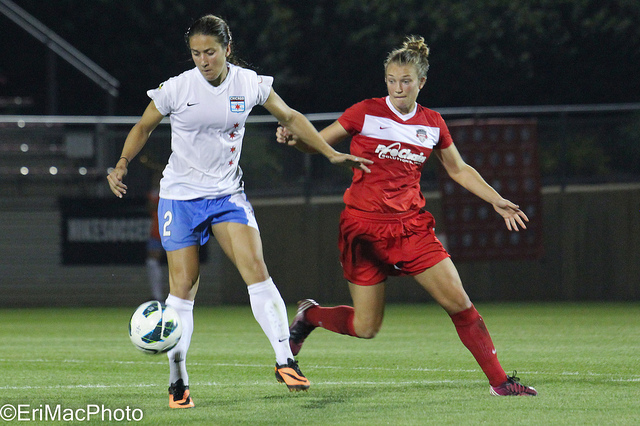 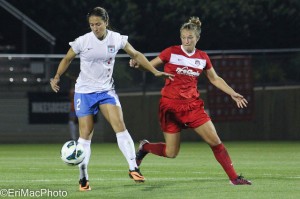 On July 31, 2012, D.C. United Women announced that two-year captain Marisa Abegg had likely played her last game for the club.

As it turns out, the club was partially right.

Abegg had in fact played her last game with D.C. United Women. Late last year, the club became the Washington Spirit and joined the National Women’s Soccer League. D.C. United Women’s announcement was wrong however, about Abegg being finished playing soccer in D.C.

Exactly one year after D.C. United Women announced Abegg’s departure, the Washington Spirit announced the addition of, you guessed it, Marisa Abegg. The Spirit added Abegg to their heavily depleted ranks with several of the team’s defenders carrying injuries.

The Equalizer has already chronicled the journeys of the other eleventh hour additions by the NWSL teams, but none is as fitting as Abegg’s. Aside from captaining D.C. United, Abegg was quite literally the face of the franchise. In fact, for the first month of the NWSL season, a larger than life banner of Abegg still hung from the Discovery Sports Complex adjacent to the SoccerPlex.

When asked what became of the banner Spirit GM Chris Hummer admitted he wasn’t sure and jokingly suggested that he raffled it off. Given Abegg’s performance in her four appearances with the club, Spirit fans might take him up on the offer.

In last Saturday’s match against the Seattle Reign, Abegg was undoubtedly one of the best players on the pitch. She helped thwart the Seattle attack on several occasions including blocking a shot with her face in 38th minute.

“Abegg has been incredible from the start,” Spirit goalkeeper Ashlyn Harris. “She stepped in positive attitude, great energy and never skipped a beat. I never questioned her heart and her tenacity. Every game she is throwing her body left and right for this team and to do that and being here to fight, she didn’t know who fighting for but it did not matter.”

Of course, given Abegg’s resume, the success was far from unpredictable. She was a three-year captain at Stanford University, where she started 91 matches for the Cardinal. Abegg was also a member of the U-20 and U-23 U.S. women’s national teams. She then took her talents to WPS with stints at FC Gold Pride and the Washington Freedom.

While with D.C. United Women in 2011 and 2012 in the W-League, she earned All-Eastern Conference honors both years. Most recently, Abegg earned all-conference and all-league honors during a stint with the Gulf Coast Texans of the WPSL.

“It’s been a challenge, and it’s been awesome. It’s so good to be back at this level and to be playing with players at such a high level,” Abegg said after last Saturday’s win against the Seattle Reign.

Where does Abegg rank her time with Washington Spirit in her soccer career? A Top 3 moment, the other two being playing in the NCAA Final Four with Stanford, and scoring the winning penalty kick that secured D.C. United’s victory in the third place game of the W-League Finals last season.

What remains to be seen is whether Abegg’s time with the Spirit in 2013 is yet another chapter in her soccer career or rather a fantastic bookend. Following the Spirit’s last game of the season, Abegg will hop on a plane the following day and return home to start graduate school classes next week.

“She’s one of those players that if you had eleven of, you’d win everything,” Hummer commented after the Spirit’s last practice of the year. “We would love to have her back.”

The jury may still be out on whether or not Abegg will return to the Spirit next season. If this season showed us anything, don’t count Abegg out.