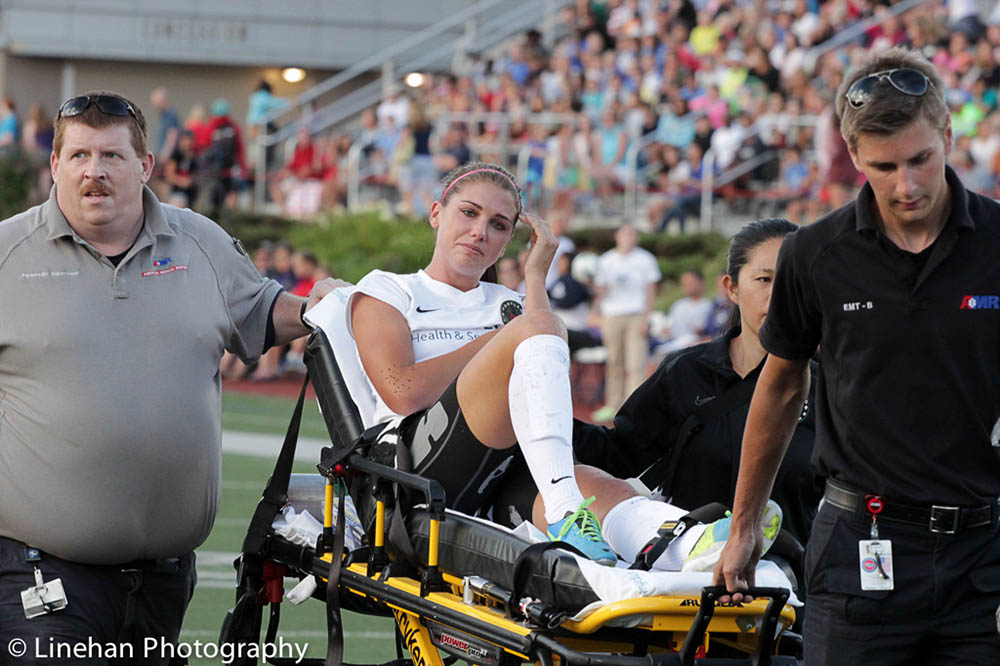 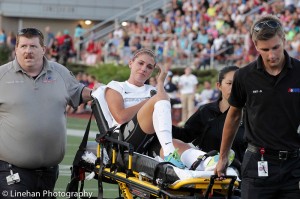 Alex Morgan hopes to recover in time from a left MCL sprain to play in an August 24 NWSL semifinal. (Photo Copyright Linehan Photography for The Equalizer)

An eventful inaugural National Women’s Soccer League season is already coming to a close. Saturday is the final weekend of the regular season and while all four playoff teams are set, they could finish in almost any order. Here’s what’s hot on the news wire as Saturday looms:

— First, for a breakdown of all the complicated, exciting playoff scenarios, reference back to The Lowdown’s breakdown.

— The NWSL has confirmed to The Equalizer that its playoff TV schedule and venues will be revealed on Monday, once the playoff seeding is set this weekend. Nothing confirmed, but I wouldn’t be surprised if there were some alternate venues at play in a couple of markets.

— Alex Morgan, who sprained her MCL in the opening minutes of an August 7 loss to Boston, said she’s hopeful that she can play in the August 24 semifinal, but won’t do so unless she is 100 percent (which, she likely won’t be, but 100 percent probably means something more like 80 percent). “I’m super positive and looking forward to playing in the game on the 24th,” she said. August 24 would be 17 days after the scary injury, which is on the early side of a 2-4 weeks recovery time frame.

— Ali Krieger says she decided to play for Tyresö in Sweden for a change of pace. “I need something fresh right now,” she told Soccerwire.com. When you have a season like the Spirit have had, that’s understandable. Krieger and goalkeeper Ashlyn Harris leave for Sweden on Monday, one day after Washington’s final game of the season. Krieger says she wants to play in the Champions League, which is where the appeal Tyresö comes in. It begs the questions: Will other players jump ship, either temporarily or on a more permanent basis? Tyresö is already loaded with Americans.

— In case you missed it yesterday, the future details of allocated players for the U.S., Canada and Mexico is still very much up in the air.

— FIFA has inspected Winnipeg’s Investors Group Field for the 2015 Women’s World Cup and, in the words of the Winnipeg Free Press, the stadium passed “with flying colours.” Not once was the word “turf” mentioned….

— ESPN will air a documentary called “The 99ers” on Tuesday at 8 p.m. ET, profiling the U.S. national team’s 1999 World Cup triumph. Here’s a short trailer of the film.

— CNN did the once-yearly obligatory story on how Marta is great but Brazil doesn’t care about women’s soccer. Shocker. A proper league for Brazil? I’ll believe it when I see it. The World Cup is one year out, so FIFA has lost any leverage of forcing

— A few female sports reporters have chimed in on the sexism and discrimination that they have endured. It’s worth a read.

— And for some shameless self promotion: Pick up Howler magazine for my piece on how the NWSL is critical to the development of the next wave of U.S. national team players.