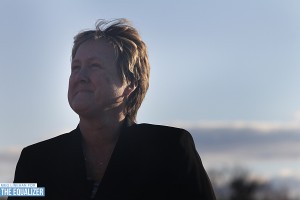 NWSL executive director Cheryl Bailey said the league will address the future of its livestreams in the offseason. (Photo Copyright Meg Linehan for The Equalizer)

When the National Women’s Soccer League was announced, an obvious first question for fans was, ‘How can we watch the games?’ FC Kansas City President Brian Budzinski hinted that fans would be “really happy” with the league’s plans.

As it turned out, the league opted to make all games available to watch live and for free, mostly on YouTube. But not everyone was always happy.

Some streams stopped working intermittently during games. Sometimes audio would cut out. Sometimes on-field action was simply hard to see due to low resolution.

The league, which required all teams to provide live streams online, had requested minimum standards: Teams should have setups with three-cameras, the broadcasts should show replays, scores and game clocks should be visible and a minimum bandwidth should be met.

Not all teams met those standards, but most made improvements as the season continued. Sky Blue, for instance, started the season with one of the most basic broadcasts, but slowly added features such as a score display and an additional camera for field reporters.

NWSL executive director Cheryl Bailey said with the short timeframe teams had to put together the live streams, “no doubt, hiccups were going to happen.” But she added, “There were some pretty good improvements as the season went on. Some markets did a much better job than others, but that’s not unusual.”

Next season, more improvements are expected, such as more high-definition video quality and higher streaming bandwidths to prevent choppy streams. But final decisions on specific league-wide changes won’t be made until the off-season, Bailey said.

“We want to make sure every week, everyone is having a good live stream to give people access to our product,” Bailey told The Equalizer. “There’s no specific timetable. We have a variety of topics in the league that we have to take a look at and clearly that is one.”

But teams are making their own assessments, too.

Long before Alex Morgan tweeted her frustration at the free stream for the Thorns game in Rochester on Saturday, the Western New York Flash were looking at how to change their setup for next year.

Western New York spent most of the season using a do-it-yourself service called Live Sports Video that provides a web simulcast of the in-stadium video feed. But for their last two games, they switched to YouTube.

The impact was immediate – live viewers increased tenfold. The club will likely continue using YouTube as a platform next season. But bandwidth will need to be increased to accommodate better picture quality.

“We have already discussed how we can improve our live stream for next season, and with a full offseason to work with, we are looking forward to improving for next year,” said team spokeswoman Jackie Maynard. “Obviously, we’re going to go through a few hiccups in our first season, but overall this has been a great endeavor for the NWSL.”

One of the fan-favorite streams this season has been that of Seattle Reign FC. The quality of broadcasts has been high and consistent, but the club pays an outside broadcast company called Bootstrapper Studios to do everything.

Rather, the ideal model is that of the Portland Thorns – all of their video production and streaming is handled in-house, but the result is a high quality product that’s usually free of technical difficulties. The problem for NWSL teams hoping to replicate Portland’s model is that their infrastructure was already in place for a partnered Major League Soccer club, the Portland Timbers. None of the other NWSL teams are partnered with MLS teams.

Thorns FC said it would not be fair to compare their stream to other NWSL teams that lacked the existing infrastructure going into the inaugural season, but added that today’s fans expect HD quality.

“The organization places great emphasis on the quality and availability of our streaming and video elements, across the board,” Thorns FC said in a statement at the request of The Equalizer. “We provide all web streams free of charge and it was important to make it a high quality/HD stream because fan expectations have changed. High definition is now the online standard.”

Live broadcasts cost money. The better they are, the more they cost. The league and clubs declined to release information about financials, but according to information obtained by The Equalizer, one team budgeted its low-end live stream operation at $1,500 for the entire season.

One frequently discussed solution is a paid model. The logic goes that by requiring viewers to pay, teams will be able to afford a higher-end broadcast. But a league-wide movement to charge for streams seems unlikely, at least for next year.

The Boston Breakers are the only team to charge in the league’s inaugural year. Breakers general manager Lee Billiard said charging $4.95 per game allowed the club to offset costs and provide one of the higher-quality streams in the league. But a free broadcast appears to be on the horizon.

“From a business standpoint, we did not lose tens of thousands of dollars in year one. The strategy next year will more than likely be to offer the broadcasting at no charge,” Billiard said in an email. “No. 1, because we can prepare for the expense way in advance. And No. 2, we have a product to show sponsors. Sure, we may not have the online numbers that some of the teams have shown across the league, due to us charging, but what I can show is we have a top quality product and league-wide numbers have shown the interest is there in the web streaming.”

Clubs and the league agree – free live streams are a marketing opportunity. Bailey said the NWSL saw the online broadcasts as “a way that would get everyone excited about the National Women’s Soccer League and give them access to the product we have.”

Putting the streams behind a pay wall doesn’t seem conducive to that marketing approach. But the model is a popular one in professional sports. MLS, MLB and the NHL all charge up to $60 per season for live streaming HD access to all out-of-market games.

Bailey isn’t ruling anything out.

“When we get together with the owners to talk through it, any model will be on the table,” Bailey said. “It’s something that we’re going to talk about and see what’s best for the National Women’s Soccer League.”

The league-wide average viewership on YouTube is about 7,000 live viewers per match.  As of earlier this month, the NWSL channel had more than 1.2 million views, but a clip of Lisa De Vanna’s stunning bicycle kick goal accounted for about 600,000 of that.

At any given time, the number of viewers displayed during a live match will typically range anywhere from about 1,000 viewers to as much as of 10,000.  The average viewer retention rate is less than a match’s half, but that rate performs well against other videos on YouTube in similar length.

Viewership as of July, according to individual clubs:

There generally weren’t firm expectations for viewership. The digital world the NWSL lives in is in some ways light-years from the days of Women’s Professional Soccer (WPS), which was founded in 2009 and later folded. The NWSL’s inaugural year would be a baseline around which to build future expectations.

But television remains the ultimate way to reach a mass audience, especially a new audience that won’t go out of their way to find a live stream on the internet.

To wit: Ratings analyst firm Nielsen reported 101,000 viewers watched FC Kansas City beat home team Portland Thorns on Aug. 4. For comparison, that one game reached 8 percent of the total views NWSL’s YouTube channel received all season long by that point. Or to put it another way, the average online broadcast garners just 7 percent of the audience the Aug. 4 TV broadcast did.

The league’s Fox Soccer debut, a Washington loss at Seattle on July 14, averaged 63,000 viewers, according to Nielsen. It was closer ratings-wise to WPS, but a strong showing. And the average online broadcast garners about 11 percent of what that Fox Soccer game did.

League representatives have indicated discussions and decisions about television partnerships for 2014 will be worked out after the season ends.

Play-by-play: Sean Wheelock has experience as a broadcaster for Fox Soccer Channel and ESPN covering MLS

Analyst: Angela Harrison is a former NCAA All-American and two-time W-League champion with the Boston Renegades

Play-by-play: Tom Glasgow is an announcer for ROOT Sports calling Pac-12 football and basketball and currently serves as sports director at KOMO Newsradio

Analyst: Leslie Gallimore is the current head coach for the University of Washington women’s soccer team

Play-by-play: Michael Minnich is editor of the Mineral Daily News Tribune and previously called games for the Washington Freedom and at West Virginia University

Analyst: Danielle Malagari played for the University of Maryland and is former captain of D.C. United

Analyst: Mike Kirmse is a retired soccer player who played for the Buffalo Blizzard, Rochester Rhinos and in Germany

The Lowdown: What’s on the line in Week 19
The View from the North: Matheson’s career year