The Lowdown: What’s on the line in Week 19 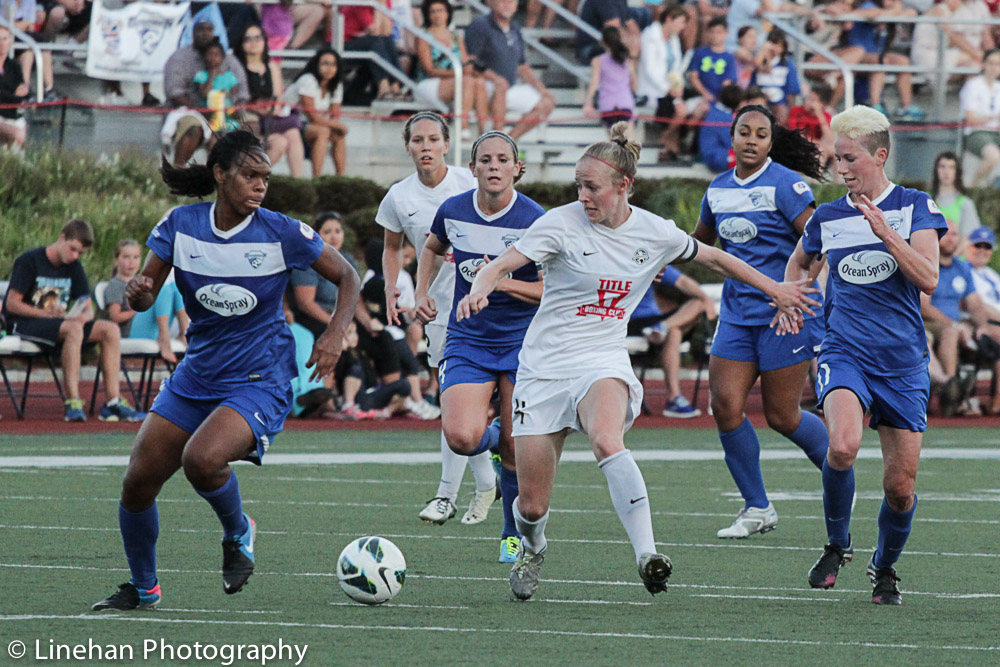 The wildest and strangest week of the 18 played so far in NWSL saw three teams clinch playoff berths in one night before all four playoff teams failed to capitalize on the misfortunes of the other three on the weekend.

The week was so odd that on Saturday, the Spirit won and FC Kansas City lost, but that was hardly the wackiest moment of the week.  Wednesday, in Boyds, Md., the Spirit snapped their 13-match winless streak but only after a lengthy lightning delay was followed by another delay which eventually brought the match to a premature conclusion after 80:04 had been played.  The Red Stars were on the wrong end of it and when curfew came and went without the match resuming it officially eliminated them from playoff contention.

Week 19 is unlikely to live up to the wackiness of Week 18, but we do know that all things regular season will be resolved when the eight teams play Saturday or Sunday.  Here is a detailed look at everything that is on the line during the final week of the NWSL regular season.

FC Kansas City enters the weekend three points clear if their fellow playoff teams.  That means all they require is a point to secure 1st place.  Everyone else is tied.  Also the four playoff teams all finish the season playing non-playoff teams.  That makes the basic math easy.  So we’ll focus this on how each team is looking in the all-important tiebreaker scenario.  Here is a closer look:

VS FLASH:  Lose the tiebreaker meaning the biggest threat to regular season supremacy will be a loss combined with a Western New York win.

VS THORNS:  Win the tiebreaker

VS SKY BLUE:  Essentially this is wrapped up for the Blues but Sky Blue can technically take over if they flip the goal difference, but the spread is currently eight goals so it would take 4-0 or better results for both teams.  Short of this happening combined with a Flash win, FC Kansas City has clinched a home semifinal match.

VS FLASH/SKY BLUE:  FC Kansas City finish 2nd in this three-way battle unless Sky Blue flips the goal difference as described above.

OUTLOOK:  The Blues can make any tiebreaker talk moot by drawing or better Sunday against the Red Stars.  Most now consider them the best team in the league and they can win the inaugural championship without leaving Kansas City again.

VS KANSAS CITY:  Win this tiebreaker as well as any three-way tiebreaker involving the Blues, meaning a win combined with an FC Kansas City loss gives the Flash the regular season title.

VS THORNS:  They tied in the regular season but the Flash are nine goals better than the Thorns on goal difference so unless the Thorns can make that up over the weekend, the Flash own this tiebreaker.

VS SKY BLUE:  Win this tiebreaker after going 3-1-0 against their old WPS rivals.

OUTLOOK:  The Flash have been lurking for much of the summer waiting for their chance to pounce on the top position.  They still need help to get it, but their remarkable 4-1-3 record against the other playoff teams have them sitting pretty on tiebreakers and that means a win over the Breakers this weekend is all they need to secure a home semifinal.

VS KANSAS CITY:  Lose this tiebreaker and all others involving the league leaders, meaning the Thorns can no longer finish 1st in the league.

VS FLASH:  Trail this tiebreaker on goal difference, which they can make up, but the difference is nine goals so mark it is somewhere between unlikely and impossible.

VS SKY BLUE:  The most intriguing head-to-head tiebreaker because it will come down to goal difference, which the Thorns currently lead (+6 to +5).  Should that wind up even the next metric is total goals which is currently tied.  Next up is road goal difference and the Thorns would edge Sky Blue there.

VS KANSAS CITY/FLASH:  The Thorns finish 3rd in this three-way battle.

VS KANSAS CITY/SKY BLUE:  The Thorns finish 2nd or 3rd in this three-way battle with the above scenarios against Sky Blue determining the final outcome.

VS FLASH/SKY BLUE:  The Thorns finish 2nd or 3rd in this three-way battle with the above scenarios against Sky Blue determining the final outcome.

OUTLOOK:  The Thorns need help if they are going to bring playoff soccer to JELD-WEN Field but the way they have finished the season they’ll probably be pleased if they can get a few wrinkles ironed out ahead of the semifinal, wherever they may play.

VS KANSAS CITY:  Lose this tiebreaker barring the makeup of eight goals on the goal difference table.

VS FLASH:  Lose this tiebreaker.

VS THORNS:  Sky Blue currently trails this tiebreaker but can make it up as described above.  They actually benefited from the 3-3 draw in Chicago because it brought them level on total goals with the Thorns who did not score in Western New York.

VS KANSAS CITY/THORNS:  Sky Blue are currently 3rd in this three-way battle with the same scenario on goals and goal difference to overtake the Thorns.

VS FLASH/THORNS:  Sky Blue are currently 3rd in this three-way battle with the same scenario on goals and goal difference to overtake the Thorns.

OUTLOOK:  The summer leaders have been beset by injuries and need a bucket load of help to get back in the top two for a home semifinal, and they cannot finish 1st.  They should settle for getting healthy and figuring out who will be the right back once the playoffs arrive.

If FC Kansas City lose, and the Flash, Thorns, and Sky Blue all win, the four of them will all end the season on 38 points.  What happens then?

The coaching change will not yield a playoff spot, but the team is 2-0-1 under Cat Whitehill and have guaranteed themselves of finishing at least .500.  They are the only visiting team to win at Sahlen’s Stadium this season and they’ll be trying to do it again Saturday while also looking to get Sydney Leroux at least a share of the golden boot (currently trailing Lauren Holiday, 12-11.).  They’re 5th unless the Red Stars close the three-point gap and overcome seven goals on the goal differential table.

A rough but valiant season took one more cruel turn on Wednesday night when they were officially eliminated from playoff contention when a series of lightning delays forced their game in Washington to be called for curfew with the team trailing 1-0 and 10 minutes plus stoppage time still to be played.  Now they’ll be playing for a .500 season and a chance to ruin Kansas City’s shot at finishing 1st overall.

The Reign turned the clock back to spring by going 0-3 on their recent road trip, taking some of the shine off their second-half resurgence.  The finale is back at Starfire, where the Reign will be looking to draw their first blood in the supposed rivalry with the Thorns.  They will also be chasing their first shutout as the only team to concede a goal in all 21 games so far.

Mark Parsons said he and the team were gutted after not being allowed to play Wednesday’s victory to the final whistle.  No such killjoys accompanied Saturday’s win over the Reign.  The consecutive wins undoubtedly took much pressure off a team that had not won a game in 13 tries covering more than two and a half months.

What else is on the line?

Here are a few other things set to be decided during the NWSL’s final weekend of play:

Golden Boot:  Lauren Holiday has a dozen goals and leads the league over Sydney Leroux who has 11.  Abby Wambach is in the mix as well with 10 although she has played five straight without scoring.  Leroux and Wambach will be on the same field in Saturday night’s FOX Soccer tilt.  No one else is within four goals of the league lead.  The following players are on 8 goals:  Diana Matheson, Carli Lloyd, Monica Ocampo, and Alex Morgan.  Morgan is injured and will not play for the Thorns this weekend.

Assist Leader:  Holiday also paces the league in assists with 9, while Wambach and Lianne Sanderson have 7 each.  Sanderson was the runaway leader when she helped on seven goals over the first eight games, but she has now gone 13 straight without an assist (she does have four goals during that stretch.)  Katy Freels and Heather O’Reilly are next with six assists each.

The 10/10 club:  If Holiday gets an assist Sunday she will join the 10/10 club.  The only three women to have 10 goals and 10 assists in the same season in the U.S. are Wambach, Mia Hamm, and Danielle Fotopoulos, all in WUSA.

Goals against average:  Nicole Barnhart (0.90) has the lead over Adrianna Franch (0.91) and Brittany Cameron (0.94).  Barnhart and Franch are obviously too close to declare a winner and Cameron is likely to be a back up Sunday, meaning she could sneak into the top position if the other two have off days.

Shutouts: Barnhart has 10 clean sheets and will lead the league by herself.  Cameron is next with 8, followed by Franch and Karina LeBland with 7.

Yellow Cards:  No player will miss the semifinals due to yellow card accumulation.  Instead a player who takes her 5th booking of the season this weekend will have to sit out the 2014 opener.  Only a red card this weekend will rule a player out for the semifinal round.  The following players have four cards and must stay out of the book in order to be included next opening day:  Jessica Fishlock, Kaylyn Kyle, Carli Lloyd, Tobin Heath, and Alex Morgan (will not play this weekend.)

Perfect Attendance:  Four players remain eligible to play every minute for their teams.  Jen Buczkowski (KC), CoCo Goodson (Sky Blue), Estelle Johnson (WNY), and Leigh Ann Robinson (KC) have all played 1,890 minutes over 21 games.  Kathryn Williamson dropped off the list on Saturday when the Thorns replaced her with Tina Ellertson in the 71st minute.

It was a light week with 13 goals from seven games and lighter still considering six of the 13 came out of the same match.  Allocated players carried the day with nine goals from eight players including three different Mexicans.  Here’s how the goals break down with Week 18 totals in parenthesis:

— The Spirit’s Ashlyn Harris and Ali Krieger will join Tyreso in the Swedish Damallsvenskan following the conclusion of the NWSL season.  It is unclear how long the arrangement is for.  It will be quite a bump for the pair who will be joining one of the strongest clubs in the world after enduring a long summer with the last-place Spirit.

— According to Beau Dure’s match report on sportsmyriad.com, several Chicago Red Stars returned to the field at Maryland SoccerPlex to sign autographs following Wednesday’s loss to the Spirit.  Why is that significant? Because it was midnight, the match had just been called short due to weather delays and curfew, and the team had just been knocked out of the playoffs.  I’d call that going above and beyond.