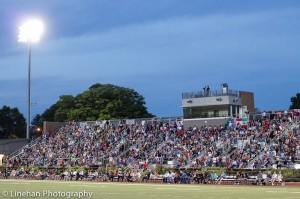 Boston played to a sellout crowd last Wednesday at Dilboy Stadium in an upset of Portland. (Photo Copyright Linehan Photography for The Equalizer)

It was a wild week for the NWSL. The playoff teams are decided but home field is still up in the air. This week also featured a game that didn’t finish and a knee injury that was big news.

With all that, the league saw good crowds. Boston had another sellout, and Chicago closed out their home season with an above average crowd. The week was finished off with a big gate in Washington and Western New York’s largest crowd of the season.

All eyes to next week as the regular season concludes, and we figure out the playoff match ups.

Here are the NWSL’s attendance numbers through Week 18 (84 games):