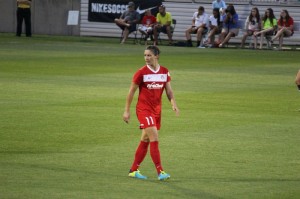 Tyresö FF has signed United States defender Ali Krieger. She will join the club after the National Women’s Soccer League season, which for the last place Washington Spirit ends on Sunday. The club confirmed the news on Monday.

Krieger’s addition makes for five U.S. internationals at the Swedish Damallsvenskan co-leaders. Christen Press (current league goals leader) and Meghan Klingenberg are already at the club, while Whitney Engen and goalkeeper Ashlyn Harris will join Tyresö for the latter half of the Swedish season, which ends Oct. 20.

“With Ali into the team, we get a player with experience of gaming at the highest international club and national team level,” Tyresö coach Tony Gustavsson said.

Krieger will join her new club sometime after the Spirit’s season ends on Sunday, just like Harris. It is believed Krieger’s contract is short-term, just like Harris’. The Spirit did not respond to requests for comment.