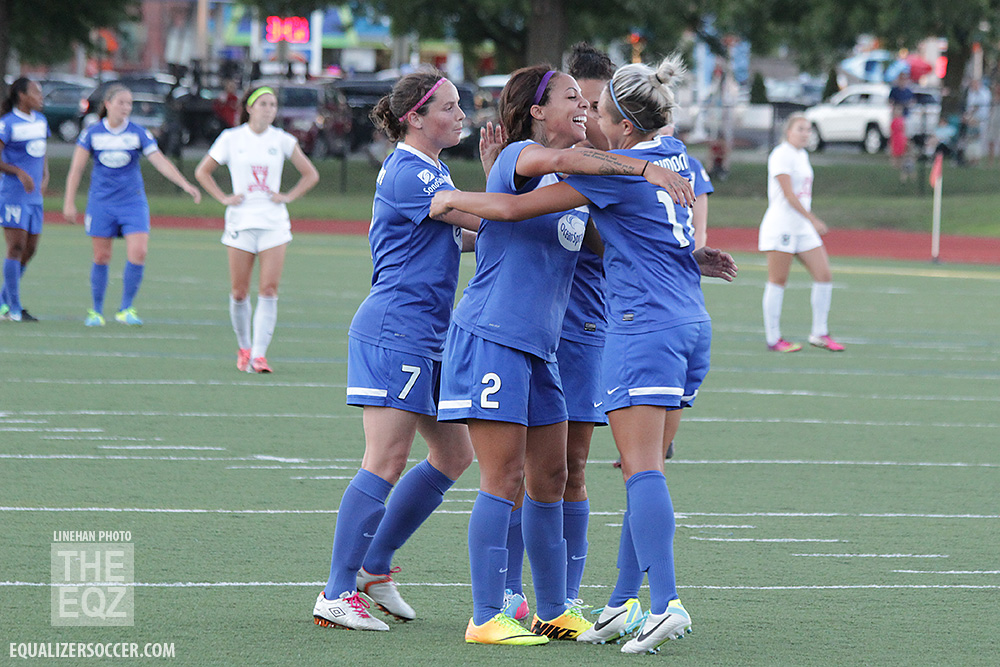 While FC Kansas City is assured of hosting one of the two playoff games in the NWSL, their play at Dilboy Stadium did not reflect their easy, self-assured play of late. Erika Tymrak and Lauren Holiday were able to connect on passes in the midfield, but Joanna Lohman had a tight handle on Holiday for most of the game. FC Kansas City mostly looked like a team desperate to escape without injuries as the march to the postseason comes to a close.

Notably, the Breakers defense seemed content to let Kristie Mewis have plenty of space down the left flank, but Mewis did little to trouble Alyssa Naeher in goal with two shots, neither of them recorded as a shot on goal. 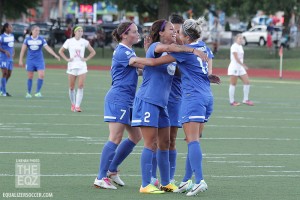 Sydney Leroux celebrates with her teammates after scoring her 11th goal of the season, which gave Boston a 1-0 win over FC Kansas City. (Photo copyright Linehan Photography for The Equalizer)

The first half was a grinding, cagey affair between the two teams. While Kansas City seemed to have the upper hand, Boston found chances to clear and counter thanks to one of the strongest defensive performances from the back line. Julie King had plenty to do to keep Merritt Mathias from slipping through in the first half, with Holiday and Tymrak lurking in the middle of the field waiting for a cross.

Holiday had two notable chances to put FC Kansas City on the board. First, in the 42nd minute after a foul on Jazmyne Avant, Holiday stepped up for the free kick from about 25 yards out. She sent a curling missile just over the post and the outstretched hand of Naeher. In the second half, Naeher was forced to come out and challenge Holiday one-on-one in the 64th minute. Holiday took an extra touch wide, and her shot went into the side-netting even as Kia McNeill came sprinting back to cover goal.

Leroux settled the game only a minute later, beating Nicole Barnhart and denying her eleventh shut-out of the season. This was Leroux’s 11th goal of the season, now placing her solely in second place for goals scored, and only one behind Holiday (12).

The win might not have been the prettiest of the season, but it keeps player/coach Cat Whitehill’s record at 2-0-1. She had nothing but praise for the opponents after the match.

“Kansas City is playing some of the best soccer in the league, and there’s a good chance they’re going to win the championship,” she said. “And for us to beat every team that’s going to be in the playoffs, that shows we’re a really good team, we just started streaking a little too late.”

While the Breakers thanked the crowd of 2,116 for their support at their home closer, Vladko Andonovki held his team on the far side of the field for a long talk.

“I don’t think we were as focused as we should have been, and it cost us a win, and it cost us clinching home-field. So now we have to win against Chicago next week, which puts on a little added pressure for us.”

And the game plan for Chicago, and then the playoffs? Sauerbrunn’s answer there was pretty simple.