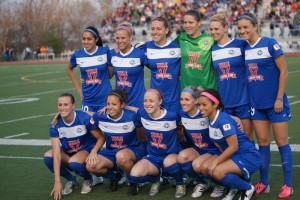 Positioning and pride.  That is what NWSL teams will be playing for over the final two weekends.  Wednesday’s action saw the remaining playoff berths get locked up leaving the final four to battle for seeding and the right to play home games.  FC Kansas City not finishing fourth as the only absolute.  On the bottom, the Reign and Spirit have wrapped up 7th and 8th, respectively, leaving the Breakers and Red Stars to play for 5th.  Here is a closer look at the remainder of the Week 18 action in NWSL:

Quick Look: The Breakers have a draw and a win since Cat Whitehill took over as interim head coach, but the four points was not enough to keep them in the playoff hunt.  Now they are fighting to finish 5th ahead of the Red Stars although supporters may be looking to the draft and not mind the lower finish.  No such worries for Kansas City, who clinch the regular season title and playoff home games if they can win this one.  They have won or drawn their last 10 and are now widely recognized as the best team in the league.

Tactical Short: Will Whitehill return to playing two holding midfielders in an attempt to stymie Lauren Holiday and Erika Tymrak? Or will she continue to promote a wider attack that, if effective, can stretch out opposing defenses? The Blues have settled on a steady lineup that has few weaknesses and they know if they win this one they can get some down time for key players before the playoffs.

Quick Look: The bottom two teams in the league will decide their season series, having split two matches in Seattle.  For the first time this season the Spirit are the momentum team in a match having survived the Red Stars in a weather-shortened match to win for only the second time all season.  Meanwhile the Reign have dropped two-straight on their current road trip.  It may not have been 90 minutes but the Spirit finally earned their first shutout of the season leaving the Reign as the only side without one.

Tactical Short: Momentum or not, make no mistake here.  The Reign are big favorites in this match.  They’ll have an edge in midfield and unless Ali Krieger—originally injured in Seattle—makes a sudden return to form and fitness over 90 minutes the Spirit have no one to deal with Megan Rapinoe.

Quick Look: The Red Stars probably were not making the playoffs anyway, but it must have been exceedingly painful to see their hopes officially end when a curfew at the Maryland SoccerPlex ended any hope of playing out the final nine minutes after a pair of lightning delays.  Sky Blue meanwhile benefited from that result, clinching a playoff spot on their night off.  Jim Gabarra’s job now is to get the troops rested and ready for the playoffs, and they still maintain a chance of hosting a playoff match, although they need points and help.  A Flash-Thorns draw Saturday night would be ideal.

Tactical Short: Sky Blue have struggled with physical teams including their previous meeting with the Red Stars in May that ended 1-1.  Brittany Bock’s absence with a left shoulder injury is a blow to their ability to deal with a team as direct and physical as the Red Stars.  Ashley Nick, who debuted for the team last weekend, could put her aerial presence to good use if given a chance to play again.

Quick Look: A rematch of one of the best games of the season and this one could well determine who hosts in the semifinals.  The Flash are guaranteed it if they can win this one and then beat the Breakers next weekend.  If the Thorns win twice they host if Sky Blue drops points or cannot make up the goal difference on the Thorns (right now:  Thorns +6, Sky Blue +5).  A draw cripples the Thorns since the Flash are +15 on goal difference, but it also opens the door for Sky Blue to leap them both.

Tactical Short: Alex Morgan is out until at least the playoffs and could be done for the season (three weeks until the final) after spraining her MCL early in Wednesday’s loss to Boston. Morgan’s injury is the tipping point of a team already spiraling downward in recent weeks. Christine Sinclair will have to carry even more of the scoring load and the Thorns will hope Mana Shim can continue her strong form. Portland have leaked goals of late, giving up nine in their last four games. Cindy Parlow Cone dropped Marian Dougherty in favor of Casey Ramirez at right back, but Abby Wambach, Carli Lloyd and Sam Kerr will be a handful — and the midfield is a place where the Flash should have an edge.