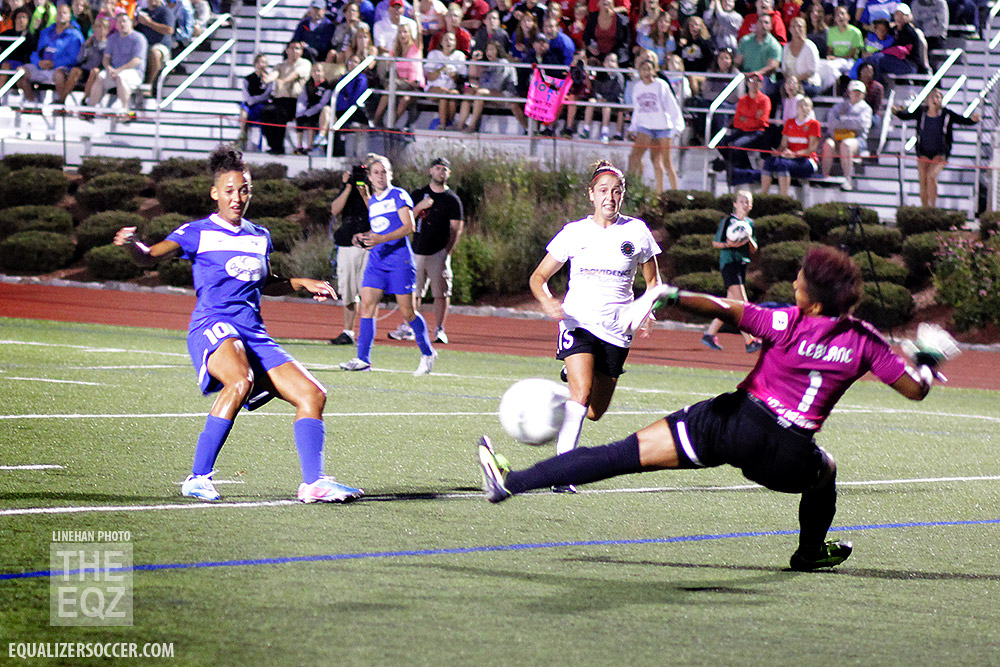 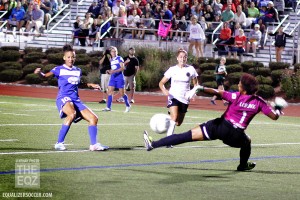 Lianne Sanderson (left) scores to help the Breakers to a 2-1 win over Portland. (Photo Copyright Linehan Photography for The Equalizer)

The four National Women’s Soccer League playoff teams are set after the strangest night in the league’s short history.

Alex Morgan was stretchered off the field six minutes into Portland’s match at Boston, then the Thorns lost 2-1 to continue their struggles, but still clinched a playoff  berth because the Chicago Red Stars 1-0 to last-place Washington Spirit on a game that made it to the 77th minute (then the 81st minute) before being suspended due lightning for almost three hours before being called final. That Chicago loss eliminated the Red Stars from playoff contention. And despite Boston’s victory, Western New York’s win over Seattle eliminated the Breakers anyway.

So FC Kansas City, the Western New York Flash, Portland Thorns FC and Sky Blue FC are the four inaugural playoff teams. The latter three are all on 34 pts., with Western New York holding the tiebreaker over both teams. The drama of Chicago or Boston sneaking into the playoffs is over.

Here’s how the wild Wednesday went down:

Morgan’s injury (updates Tuesday following further testing) will dominate the headlines, but this is a massive lost opportunity for Portland and basically ensures the Thorns cannot finish first (they can, but only with a really twisted string of results).

Tiffany Weimer, who replaced Morgan in the 12th minute, gave Portland the lead in the 51st minute, but Lianne Sanderson equalized for Boston in the 68th minute. Heather O’Reilly’s fifth goal of the season in the 84th minute proved to be the game-winner in front of a sellout of 3,012.

Breakers interim player-coach Cat Whitehill kept the game scoreless when she tracked back to cover an empty net and cleared Christine Sinclair’s 26th minute shot off the line.

Chicago had very little shot of making the playoffs anyway, but the Red Stars won’t soon forget being eliminated by a shortened game after a season already full of hard luck.

The match made it to the 77th minute before a 104-minute delay. It resumed for just four more minutes before another delay of 53 minutes brought the teams to the Maryland SoccerPlex’s midnight curfew. The game was declared final in the 81st minute.

The Western New York Flash defeated Seattle Reign 1-0 Wednesday in front of 4,993 fans and, with a little help from around the league, clinched their spot in the playoffs.

After a back-and-forth first half that saw solid chances by both sides, Carli Lloyd broke the deadlock in the 53rd minute with an assist from Abby Wambach.

On a beeline down the field, Lloyd passed to Wambach, who chipped it over defenders for Lloyd. Seattle goalkeeper Hope Solo came out for a one-on-one showdown and Lloyd placed the ball to the top right corner.

“We know what’s on the table. We know that we could potentially ‘clinch’ (a playoff berth), go to second (place), I don’t even know,” Lloyd said with a laugh. “I’m taking it one game at a time – all of us. We knew tonight was a big game, after the Boston one (last week) with barely getting by. We knew we had to come out tonight and win.”

Lloyd nearly found the back of the net other times, including in the 30th minute, when she fired a shot from outside the 18 that vaulted off the crossbar.

Minutes into the second half, Reign FC came up inches short from scoring. Megan Rapinoe launched a corner that goalkeeper Adriana Franch punched away. Seattle’s Kaylyn Kyle headed the ball toward the open net with Franch on the ground, but Huffman cleared it off the line.

It was the Flash’s first 1-0 victory of the season, and it came against a team with one of the poorer records in the league, but coach Aaran Lines said it was a confidence booster as the Flash look ahead.

“That’s coming at a very important time, to know you can bring out a 1-0 result over the 90 minutes,” Lines told reporters after the game. “It’s going to give us enormous confidence at the most important time of the year.”