Thorns looks to get back on track, on the road 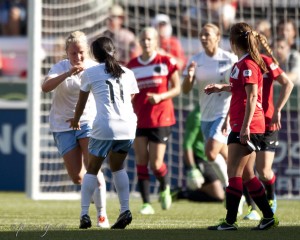 The Thorns are trying to overcome recent letdowns, like letting a late lead vs. Chicago two weeks ago slip away. (Photo Copyright Patricia Giobetti | http://www.printroom.com/pro/psgiobetti)

The great Yogi Berra once said that “Baseball is 90 percent mental. The other half is physical.” His confusing but cheeky comment applicable across all sport, including the most scrutinized women’s soccer team in the U.S.

On Sunday, FC Kansas City, the leaders of the National Women’s Soccer League, scored three goals against Portland Thorns FC at JELD-WEN Field for the second time this season. This time they won the game 3-2, unlike the 4-3 barn-burner loss on June 6. This time it was in front of an NWSL record crowd of 17,619.

The loss leaves Portland with a staggering 5-4-2 home record at the completion of all 11 regular season games at JELD-WEN Field, not quite the advantage it was expected to be.

For a team in second place (10-5-4, 34 pts.), the scrutiny the Thorns face is unprecedented in women’s soccer. Simply, the Thorns are the Miami Heat, the New York Yankees — fill in the blank ‘evil empire’ — which are loved or absolutely hated. For these teams, it’ championship or bust, every season. And it seems the Thorns have increasingly felt that pressure this season.

Frustrations on the field have been palpable, from yellow cards to arguments with referees and struggles to connect. After the game on Sunday, forward Danielle Foxhoven said she saw the desperation to find an equalizer from “most of us,” following that up with “in the last couple of minutes…some of us were in that zone, some of us were pressing and some of us just weren’t there yet. I think there’s been a little bit of a separation in our team and I think that is why we’ve struggled in the past, but I think that we’ve collectively gotten better.”

Our Meg Linehan was on-site and has the video (those remarks around the 2:45 mark):

It’s really the first confirmation from within of what has been suspected for a while now: The Thorns haven’t been on the same page. That was obvious through the middle stretch of the season, when, particularly before Tobin Heath arrived, the midfield disappeared and left striker Alex Morgan feeling “alone” up top, in her own words.

There’s a wonder if the disconnect stretches further through the team, and when talking about a team that is still very much a title contender, maybe it is just mental. Maybe it is just unrealistic public expectations. On paper, Portland can beat any team, but they seem to be beaten by themselves more than any other.

The top seed is all but out of reach at this point for Portland, 4 points back of FC. Whether or not the Thorns live up to championship expectations could be 90 percent, half mental. Or something like that.

A critical stretch of proving their mettle begins tonight in Boston, and kicks into high gear on Saturday with a visit to the Western New York Flash in a possible playoff preview.