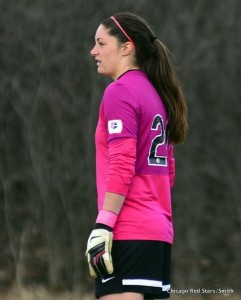 Taylor Vancil stepped in for Erin McLeod in goal and helped Chicago to a 3-1 win over Seattle on Saturday. (Photo credit Chicago Red Stars/Smith)

In front of their first sellout crowd in franchise history, the Chicago Red Stars finally figured out Seattle Reign FC on Saturday, grabbing a 3-1 win Saturday at Benedictine University to keep their playoff hopes alive.

After two questionable penalty kick goals canceled each other out by the 28th minute, Chicago made the better of their chances, with forward Inka Grings twice capitalizing on insufficient clearances by the Reign to send the 3,400 fans home happy.

“We’ve been playing in games that have been must-wins for over a month,” said Head Coach Rory Dames. “We don’t really feel pressure because we don’t consider ourselves the favorites in anything.”

In the 41st during a routine goal kick, Seattle goalkeeper Hope Solo sent the ball directly into the path of Grings just outside the box, where she stopped the ball with her chest and fired it back toward an out-of-position Solo for a goal.

Later in the 72nd, Grings again scored with a Seattle turnover transitioned quickly by a long ball to forward Jen Hoy, who delivered a cross in front of the net to Grings. Defender Kaylyn Kyle stopped the German international’s first shot, but couldn’t clear it before Grings tapped it into the net for the 3-1 lead.

Sonja Fuss opened the scoring in the 12th minute when she finished a penalty kick after Seattle’s Jessica Fishlock brought down Jennifer Hoy in the box. Kyle equalized for Reign FC, finishing a penalty kick in the 28th minute.

The win was enough to keep the Red Stars mathematically in contention for the playoffs. By halftime, any importance of the game for Seattle was dashed when the Western New York Flash finished with a draw against the Boston Breakers, eliminating the Reign from the postseason.

Chicago went into Saturday’s game as surprising underdogs having had only two losses in their last nine games, both at the hands of the Reign. The Red Stars were the only team that hadn’t yet beaten Seattle Reign, who spent the first half of the season as the league punching bag before climbing back. The two teams tied to open the season.

Lori Chalupny, the centerpiece of Chicago’s attack and leading goal-scorer, was out recovering from a right ankle injury following a nasty tackle in Portland last week. Chicago Red Stars owner Arnim Whisler said Chalupny was wearing a “walking boot” but may be seen on the field again this season. Chicago has three games left in regular season.

Chicago’s usual starting goalkeeper Erin McLeod sat the game out as a precaution due to taking some hits to the head, giving 22-year-old Taylor Vancil the nod. Although Vancil recorded a number of saves, Seattle squandered several chances, sending shots directly to her.

Seattle’s best chance came in second half stoppage time when Megan Rapinoe fired one from the top of the box that bounced off the far post but unluckily failed to cross the threshold and bounced out of play.