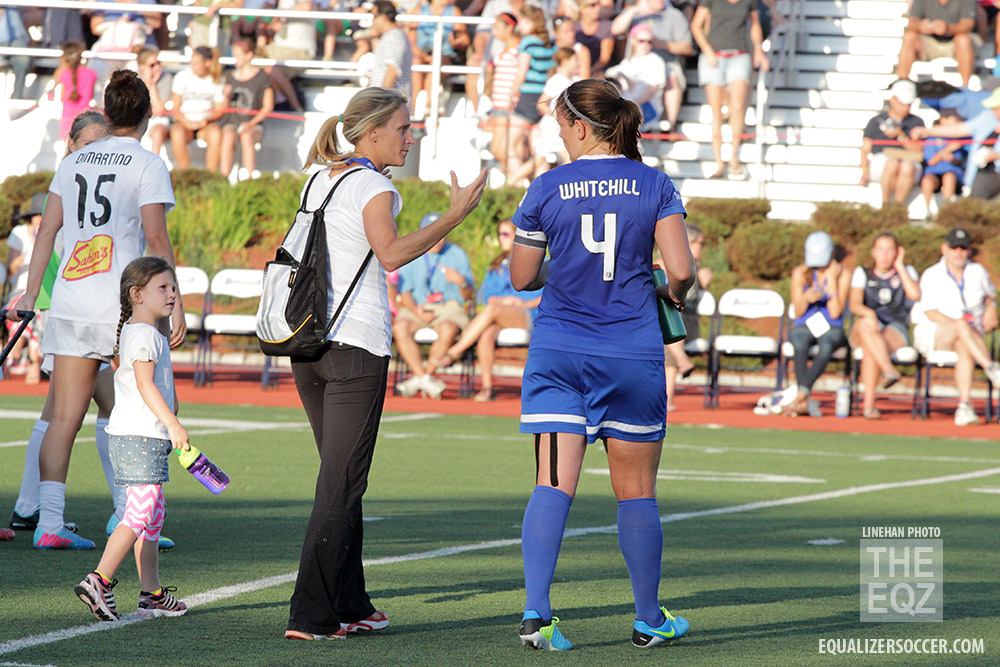 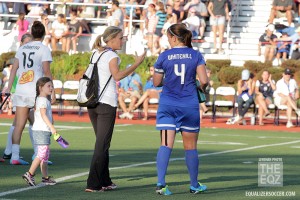 Kristine Lilly (left) and Cat Whitehill debuted as Breakers assistant coach and player-coach, respectively, on Saturday in a 2-2 draw with WNY. (Photo Copyright Linehan Photography for The Equalizer)

After spotting the home side a two-goal lead, the Western New York Flash stormed back with two goals in the final 15 minutes to draw 2-2 with the Boston Breakers Saturday night at Dilboy Stadium in Somerville, Mass.

In a quick restart off a dead ball, Vicki DiMartino had a good look at goal in the 77th minute to slide home the Flash’s first goal, cutting the Breakers lead in half.

About 10 minutes later, in the 86th minute, Carli Lloyd, in typical Lloyd fashion, ripped a shot from distance to beat Alyssa Naeher and pulled the Flash (8-4-7, 31 pts) even with the Breakers.

It didn’t seem like the it was Western New York’s day, falling behind 1-0 in the 17th minute when Cat Whitehill — the Breakers player-coach after Lisa Cole was dismissed Friday — whipped a cross to the far post from the left flank that Kyah Simon volleyed past ‘keeper Adrianna Franch.

Lianne Sanderson put the Breakers up 2-0 in the 65th minute, drilling a shot from 20 yards out inside the far post for what seemed to be the clincher in front of the sellout crowd of 2,899 fans.

But then Western New York turned it on.

Samantha Kerr brought life into her Flash teammates, creating a number of chances that just missed. In the 40th minute, she looked for the upper 90, but Naeher was up to the task, parrying the ball away. Then in the 50th minute, Kerr dribbled past Naeher and had an open goal, but shot it above frame.

The match was chalk full of playoff intensity, with momentum ebbing and flowing throughout the 90 minutes. Ultimately, neither the Flash nor the Breakers (6-7-6, 24 pts) secured their playoff fates.

A win for the Flash, along with a Seattle win over Chicago, would have sealed a playoff spot, while a loss would have eliminated the Breakers from playoff contention. The Flash, for now, sit in a third-place tie with Sky Blue FC, while the Breakers are clinging to life, sitting in fifth place, seven points off the pace for the final playoff spot in the NWSL inaugural season.

In addition to Whitehill’s first game as player coach, former Breakers and U.S. legend Kristine Lilly was also on the Boston bench as an assistant coach.

Both clubs have three games remaining in the season, ending with a match against each other on August 17 at Sahlen’s Stadium (8 p.m. ET, FOX Soccer).