Sifting through the busy weekend that was 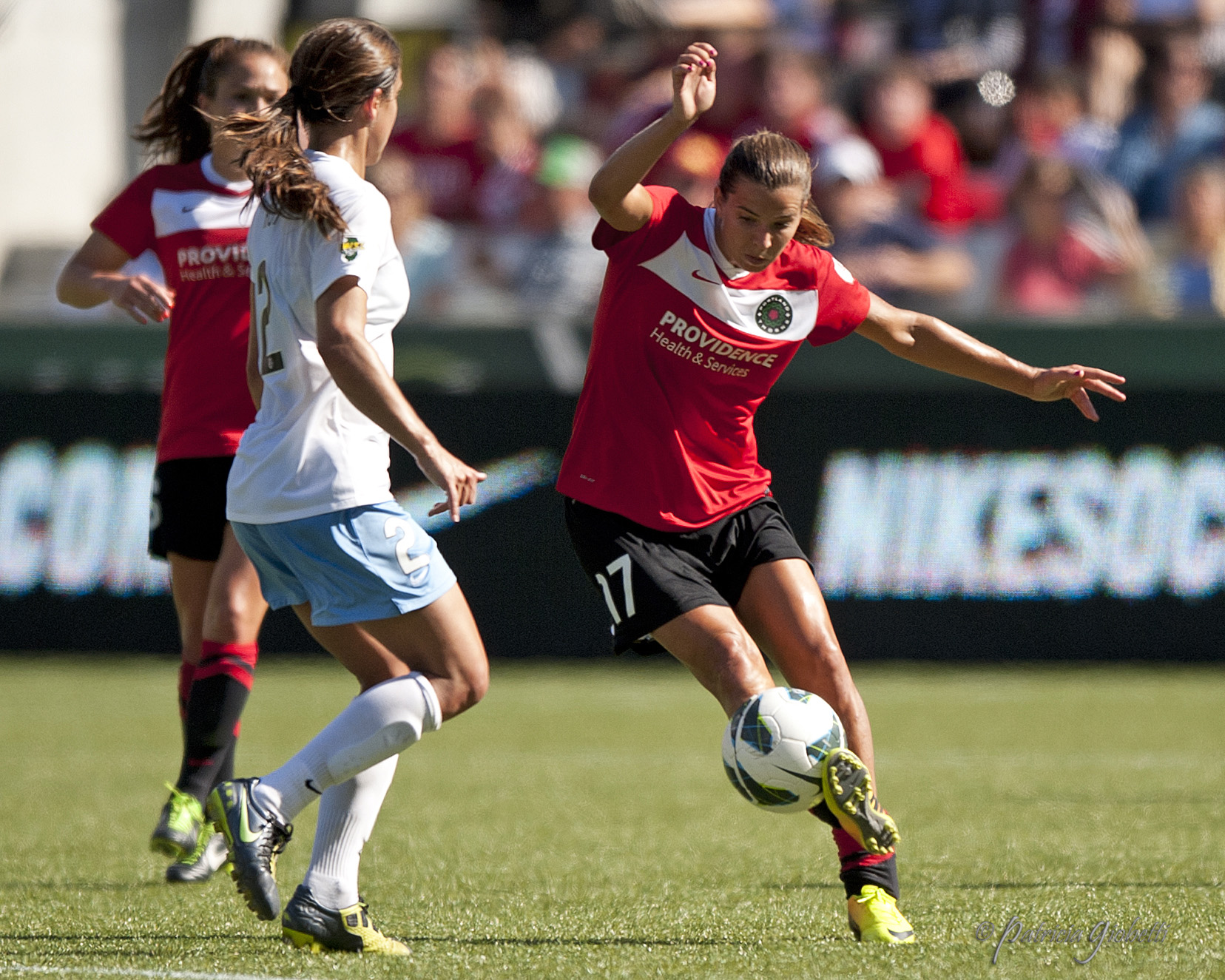 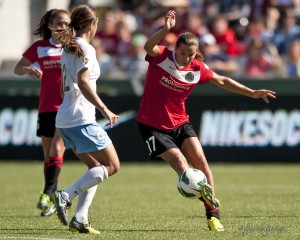 Tobin Heath could have been sent off Sunday for her tackle on Lori Chalupny. (Photo Copyright Patricia Giobetti | http://www.printroom.com/pro/psgiobetti)

A busy, important weekend in women’s soccer just passed, and if you woke up late or didn’t stick around until the final whistle, you likely missed something important. Here’s what went down, domestically and across the pond:

Germany claimed its sixth consecutive Women’s European Championship. Goalkeeper Nadine Angerer won her fifth title and stole the show, saving a penalty kick in each half to avenge a group stage loss to Norway. Our Harjeet Johal followed the entire tournament on site in Sweden (full Euro 2013 coverage here) and has her match report from the final. Yahoo! Sports has video of Angerer’s two saves:

— This is a Euro-centric view, sure, but this edition of the championship alone shows that not only could Euro stand to be expanded to 16 teams, but so too could the Olympics. Oh, and a separate Olympic qualifying tournament would be nice, Europe. You know, so your now six-time champion can actually play (Germany didn’t appear at London 2012 because they were upset by Japan in the quarterfinals at the 2011 World Cup, and only the Top 2 European teams from that tournament — Sweden and France — would qualify for the Olympics). The World Cup will jump to 24 teams in 2015.

An eight day span that began on Sunday could very well determine which team takes the No. 1 seed in the NWSL playoffs, and only league leaders FC Kansas City left the day satisfied.

First, the game everyone wants to talk about — the Chicago Red Stars’ 3-3 draw with Portland. A late equalizer from Julianne Sitch stole the point for Chicago in what was easily the most physical game in NWSL this season. Let’s start right on that note, with one of the biggest talking points of this match:

— Tobin Heath’s 14th minute tackle on Lori Chalupny ended the Chicago captain’s day — it remains to be seen what else it ended, with only three weeks left in the regular season. Heath got a yellow card for the tackle from behind. Look: it was a ‘professional foul’ to prevent a breakaway. It’s easily a yellow card, and given the angle and how far away she was from making contact with the ball, a red card would have been completely justifiable. That tackle set the tone for the day, and Kari Seitz, who has World Cup experience and is one of the best in the country, completely lost control of the match.

— Quick tangent on refereeing: It’s been the No. 1 on-field problem in NWSL this season. From missed calls, to phantom penalty kicks, to losing control of matches — refs have played far too much of a role in the stories. They got lucky last week, too. A pair of handball, automatic red cards went without ejection. Breakers goalkeeper Ashley Phillips made a ‘save’ outside of her 18-yard box on Wednesday vs. Kansas City and went unpunished, and Chicago’s Adriana Leon only got a yellow card for keeping the ball out of the goal with her hand on Thursday vs. Seattle. Both those teams lost anyway, but it begs the question: Do these refs carry red cards? It seems only when Sophie Schmidt tosses a ball at someone.

— Cindy Parlow Cone took off Alex Morgan in the 74th minute, with the Thorns leading 3-1. This came minutes after Morgan’s yellow card for what might be defined as asking for a caution with how late she kicked the ball away. There’s a photo of Morgan on the bench that reminds me of one moment people seem to easily forget: Morgan was benched during Olympic qualifying in 2012. Pia Sundhage said after that 4-0 win over Mexico that Morgan wasn’t a 90-minute player. Morgan was visibly and verbally frustrated. She went on to have a calendar year matched only by Mia Hamm, who also had 20 goals and 20 assists in 1998. There are two ways this could go from here, and brief history tells us Sky Blue FC and the rest of the league might be in for some trouble. That said, these frustrations haven’t been measured in weeks, but by an entire season. Christine Sinclair’s two goals on Sunday eased the Canadian’s struggles this year, but nobody could have predicted Portland struggling to score.

— Some people took issue with Thorns owner Merritt Paulson’s halftime interview on Fox Soccer, in which he said he wants higher standards for the NWSL, including teams not playing on “high school” fields with a lot of lines, and better online game streaming standards. What exactly is the issue there? He wasn’t condescending; he was matter of fact. I get that other teams don’t have Portland’s resources, but if anyone is criticizing an owner who has ambitions of bettering the league, they may want to stop and ask who exactly is preventing it from moving forward.

— FC Kansas City’s win puts the Blues four points clear atop the table, although they’ve played the most games (19) in the league. Still, the way they’ve played (detailed here last week) makes them the current title favorites. Portland and Sky Blue FC continue to underwhelm, while the Flash, as well as they’ve played, can’t get out of this 4th place battle.

— With no Kelley O’Hara, no Caitlin Foord and a significantly less than healthy Lisa De Vanna, the once mystery Juggernaut Sky Blue FC has been very average over the last three weeks. They are 1-3-2 since that June 22 scoreless draw with Portland, which kept Sky Blue atop the table. Kansas City moved into first on Wednesday, the first time since May 16 (Sky Blue’s 1-0 win over Portland) that the New Jersey side had been displaced from the top for more than a few hours.

— Sky Blue FC hosts the Washington Spirit on Saturday. If they can’t pick up three points at home against last place Washington, their hopes of even hosting a semifinal may go up in smoke. Because, of course, they first face a critical road game at Portland on Wednesday.

Washington played without its entire starting back four for basically the entirety of an ugly 5-2 loss to Boston on Saturday. Missing all four starting defender would make ever Bayern Munich look considerably less intimidating, never mind the last place, one-win team in the National Women’s Soccer League.

But I’ve heard the term “unlucky” used a lot with the Spirit. They’ve been victims of Lady Luck’s cruel side, for sure, but that’s just a small piece of the puzzle. Even in preseason this team looked like a contender for last place. They were almost unanimously picked to finish last in our preseason roundtable. The bottom line is that the depth of talent just isn’t there.

Conny Pohlers has under-delivered, but there still isn’t a goal scoring threat for Washington (13 goals in 17 games, with the two on Saturday being the first from the run of play since May 16). Diana Matheson has carried the weight of an entire midfield (and a forward or two) on her back, and, when healthy, the back four is nothing pretty good. Goalkeeper Ashlyn Harris’ season went from underwhelming to, over the past few weeks, fed up with what’s gone on around her (And who wouldn’t be?).

What the Spirit need is something of a restart button: Some pieces should stay (Krieger, Matheson and versatile youngsters with upside, like Tori Huster) and otherwise, everyone can basically enter 2014 training camp like a player on trial — and they are all on trial right now, too, by the way.

Not to be forgotten

— The Pali Blues won the 2013 USL W-League title on Sunday, beating Laval Comets 1-0 on an own goal. The championship is Pali’s first since 2009 and third overall.

— In case you missed it, I caught up with Hope Solo last week about her body’s health, Seattle Reign FC’s recent turn in form, and how she has been playing.