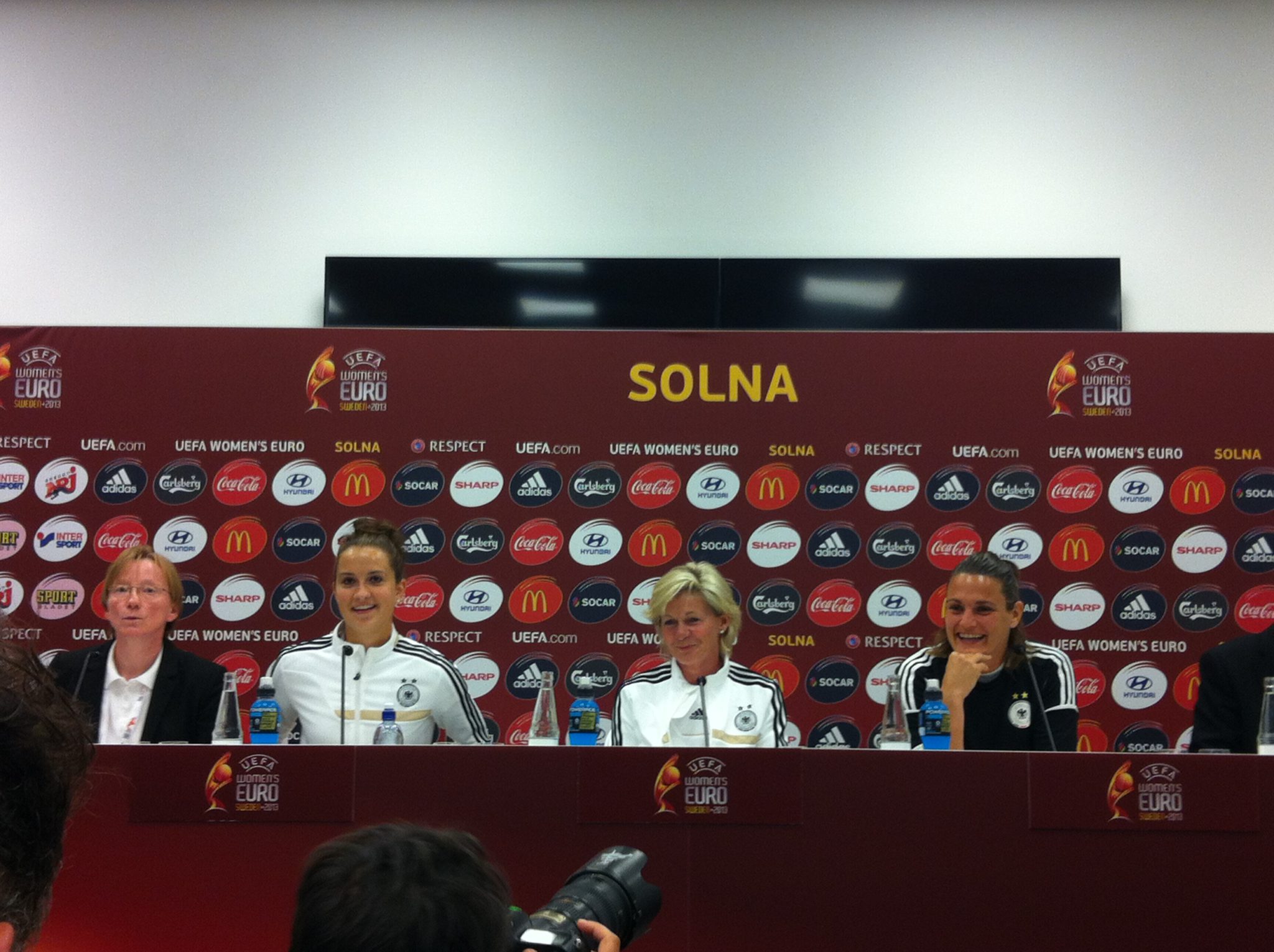 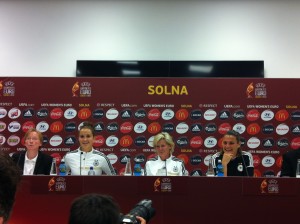 Germany are favored, but can they get revenge on Norway? (Photo Copyright Harjeet Johal for The Equalizer)

SOLNA, Sweden — Germany and Norway both held their final press conference before the 2013 European Championship Final takes place on Sunday afternoon at Friends, Arena. Germany coach Silvia Neid and keeper Nadine Angerer were in good spirits as they joked with the German press, while Norway was in a cautious, serious tone as they spoke to the throng of media. Coach Even Pellerud talked about his friendship with Germany and what will happen to that tomorrow.

“It’s almost like playing against good friends tomorrow, but when it’s time for kickoff we have to forget all the old times and fight for a win,” he said.

Norway have lost three previous European Championship final matches to Germany. In 1989, 1991, and 2005 Germany trounced Norway with score lines of 4-1, 3-1, and 3-1, respectively. Neid played on the 1989 and 1991 teams that were victorious. Pellerud was also serving as coach of Norway during those first two tournaments and that makes him more than familiar with the German style of football and tactics.

“We know how Germany is, we know how they play, ” he said. “We know the players; we have a lot of admiration for them with their record over the last three decades and we know it’s going to be another tough game.”

Germany are the five-time defending European Championship holders and Norway are the clear underdog. Norway were able to beat Germany 1-0 on July 17 during the final day of group B play. Norwegian midfielder Ingvlid Isaksen scored a goal in first half stoppage time, sending Germany to their first loss at the European Championship in 17 years, a feat that measured 59 German matches without tasting defeat. 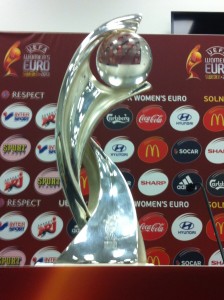 For Norwegian defender Maren Mjelde, that was her first career victory over Germany with the Norway senior national team, and she hopes a second win over Germany is soon to come.

“It was a really good atmosphere as a team after we won against Germany. For me it was my first time to beat Germany, so why don’t we do it again.”

Germany has played exceptional defense in every match they’ve played, having only allowed one goal all tournament, and Norway will be hard-pressed to find a goal. The highest scoring team at Euro 2013 (Sweden) was shutout, and eliminated in the semifinals thanks to a stonewalled German defensive front. Despite sitting back and defending with their pants on fire against Denmark. Norway seem optimistic about scoring goals against Germany, according to the Turbine Potsdam player, Mjelde.

“Hopefully we will score a lot more goals, and more than Germany.”

During the German press conference, Neid accused Norway of playing completely defense, and sitting back against Iceland when Norway clearly have the talent and ability to play a much more open brand of attacking football. Even Pellerud was not interested in talking defensive tactics with the media during his presser.

“I haven’t thought so much about the game plan yet but I know that when Germany have the ball I will defend,” he said.

Angerer, the German captain, has been a standout player for her team at Euro 2013. Despite being the oldest player on Germany, Angerer has been the best player on the pitch through every German match. With Germany in transition mode thanks to six injured players who aren’t here, Angerer has had to lead the way more than ever. Germany haven’t played at their best, but they have still made the final. Angerer talked about the dream, and how Germany have overcome their early struggles.

“Yes of course it’s a dream for me as well,” she said. “We had a shaky start to the group stage but we got ourselves together in a fantastic way. We’ve grown together as a team, and especially the team spirit, which has played a vital role. We all have those red armbands that say ‘Team Spirit’ (In Swedish), and playing with that is a gift that we are giving to ourselves.” 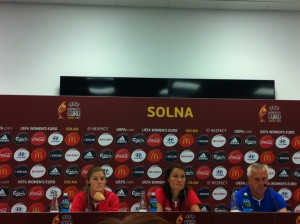 Norway hope to replicate their group stage success vs. Germany in the final. (Photo Copyright Harjeet Johal for The Equalizer)

Germany could again be without their leading goal scorer Celia Okoyino da Mbabi. The leading goal scorer in Euro 2013 qualifying with 17 goals has been bothered with a nagging thigh injury and it is still not known if she will be fit to play against Norway. Da Mbabi scored twice against Iceland in group B play and her brace still has her atop German goal scoring. Neid offered up little information concerning da Mbabi’s playing status.

“She trained this morning, and she looked good but we will be looking again at the end of our training today.”

A sellout crowd is expected to attend the match despite host country Sweden having been knocked out. Organizers appear to be worried that some fans will not show up, and in an effort to entice local fans the Swedish national team will walk around the pitch at halftime to salute the fans.

The 2013 European Championships have been watched by a total live TV audience of 55.2 million, which has already surpassed Euro 2009 in Finland by 8 million. UEFA General Secretary Gianni Infantino called Euro 2013 “The best ever Women’s Euro that UEFA have organized.”