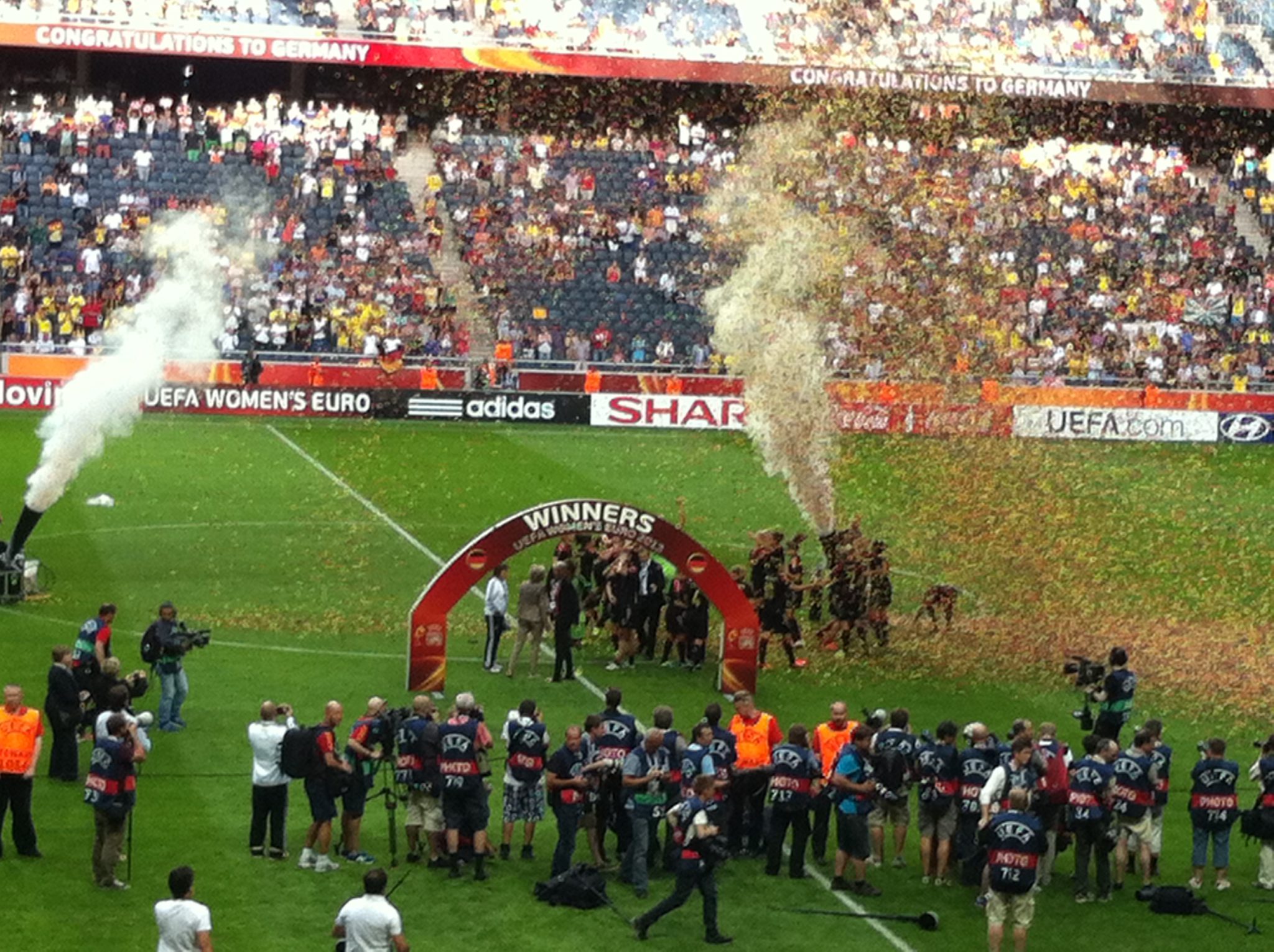 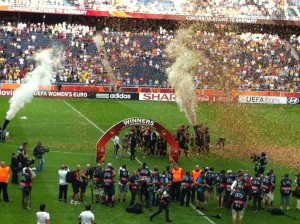 SOLNA, Sweden — Germany and Norway battled for the 2013 UEFA Women’s European Championship trophy on a hot, and sunny Sunday afternoon at Friends, Arena. The Germans came into the match as favorites having won the last five European Championships and they narrowly defeated Norway 1-0 in front of a record crowd of 41,301 spectators. Germany, and Norway put on a memorable match with a flurry of chances at both ends of the pitch. Nadine Angerer and Ingrid Hjelmseth stole the show as both keepers were the difference as players on both sides were turned away with regularity.

Germany keeper Nadine Angerer was awarded UEFA player of the match as she saved two controversial Norway penalties, one in each half, to backstop Germany to their 6th consecutive European Championship. Anja Mittag came on to start the second half and scored a can’t-miss goal in the 49th minute. Celia Okoyino da Mbabi was the best outward player on the pitch, and she couldn’t stop smiling postgame.

“It was really really difficult for me to watch the semifinal from the bench, and the doctor did a great job with my hamstring and I’m so happy I could play,” she said.

Bianca Schmidt was the final substitute for Silva Neid’s team as they went with an extra defender in the final 15 minutes of the match. The 23-year-old Frankurt player has been a staple as a second half stalwart defender during close of matches for Germany at this tournament. Bianca was overjoyed as she spoke highly over of keeper Nadine Angerer.

“I’m really happy, it’s unbelievable, it’s fantastic,” Schmidt said. “We are a young team, and we aren’t sure if we can do this, but we did it. In the tournament she was our best player. Yea, I think that’s the reason why we are the champions.”

The first half featured fast paced football up and down the pitch which surprised many people. In the lead up to the match it was thought that Norway would sit back, defend, and park the bus for 90 minutes like they did against Denmark in the semifinals. Both teams traded chances with the most dangerous player on the pitch being da Mbabi. Having returned from a hamstring injury, da Mbabi was all over the pitch, and she nearly opened the scoring in the 20th minute with a header from a Dzsenifer Marozsan corner that was slightly off target.

Norway had a brilliant chance to take the lead on Germany with a penalty in the 27th minute. Da Mbabi clumsily tripped up Catherine Dekkerhus inside the German box and Romanian referee Cristina Dorcioman had no choice but to point to the spot. With the crowd buzzing, 31-year-old Trine Ronning stepped up and fired directly down the middle. Angerer guessed right and managed to kick the ball up and over her net for a corner. Norway blew a golden opportunity to go up on Germany in what would have been a key momentum advantage. Norwegian defender Maren Mjelde was visibly upset with the loss following the match.

“I’m very disappointed because I thought we did a really good job today,” she said. “Maybe this was the best game in the tournament for us. Today I feel like I lost the gold medal .”

When asked about Norway’s difficulty taking penalties this afternoon, Mjelde was hesitant to answer.

“When you take penalties in a big final you get nervous maybe. The two players on our team took the responsibility, and took the penalties. Angerer was good today, so I think she did good saves.”

Norway had three corners to Germany’s one in the first half, but Germany had the better scoring opportunities. Norwegian keeper Ingrid Hjelmseth was credited with making six saves. It was clear that both keepers were the only reason why this match went into halftime without a goal.

“Right now I’m disappointed because we were so close, and today I think we played very well, it was our best match of the tournament. When you have two penalties, and quite a few chances we should have been winning this game. ”

Neid made a key substitution to start the second half by bringing on Mittag for attacking winger Lena Lotzen, and that proved to be just what Germany needed to find the back of the net. In the 49th minute, da Mbabi broke down the left flank with a pair of Norwegian defenders marker her inside the Norway box. Da Mbabi pulled up, and found an unmarked, and wide open Mittag, who took her time before sending the ball past Hjelmseth. Mbabi described the goal, and gave praise to her keeper after the match.

“I just looked up and I saw Anja, and I just passed the ball, and she did a great job. For me it was just… she’s open just play her the ball. Nadine did a really really great job so thank you thank you Nadine. We know that she is a world-class goalkeeper and she showed it today.”

Norway did not lay dow, and surrender after Mittag scored. In fact, Norway were remarkably awarded a second penalty. Caroline Hansen went down with a hint of a dive and Norway Coach Evan Pellerud had leading goal scorer Solveig Gulbrandsen take the penalty in the 60th minute. Nadine Angerer once again turned away another Norway penalty by making the save. Gulbrandsen was shortly subbed off for Elise Thorsnes.

Norway was thought to have scored in the 63rd minute of play, however, their goal was called back on a offside by assistant referee Sian Massey. Mjelde delivered a great cross to Ada Hegerberg, however she was too quick to score.

With Norway looking for a goal, they were left vulnerable on the counter attack from Germany. Nadine Kessler hit the post in the 82nd minute when Leonie Maier sent her a lovely through ball. For the most part Norway controlled the ball and possession for the final 20 minutes as they needed to score to force extra time. Unfortunately the crowd of fans full of many Swedish turned Norway supporters left without seeing Norway tie the match.

Germany have proved that no matter how many injuries they have coming into a major tournament they are always a forced to be reckoned with. Germany may have been sleeping walking through the group stage, but when the games start to matter you never rule them out if they are alive.