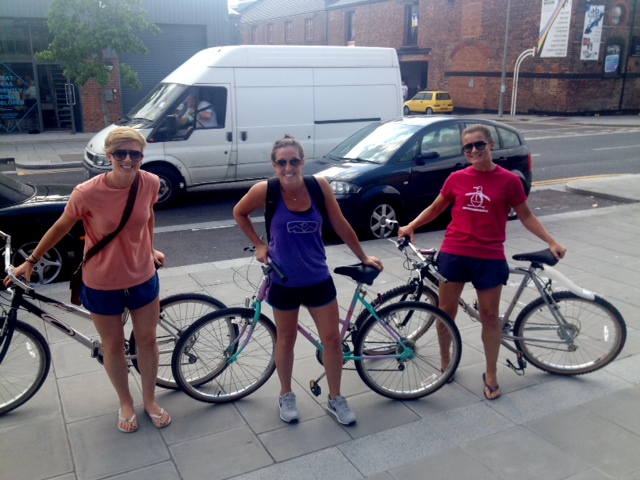 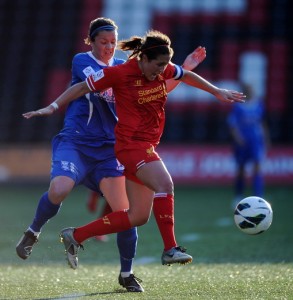 With the second half of the season about to begin, Amanda DaCosta (right) and Liverpool are atop the FAWSL table.

There’s a song my mom would always sing whenever I left home. By song, I mean one line of a song; and by sing I mean to speak semi-rhythmically. “On the road agaaaaaiin!” I guess “in the air again” seems more appropriate.

After a few weeks of a break in the league for the European Championships, I was able to spend some time with my family and friends. Though generally a short-lived visit, my time at home means more and more to me each time I get the opportunity, and I’ve really begun to cherish each second of my short-term stays. But, every short story still has to have an ending, which means I still had to eventually say my goodbyes.

I have the whole month of July to train before the season starts back up in August, and it definitely kicks off with a bang. We face Arsenal, former league champions, at our home ground after both winning and losing to them during the first half of the season. Every league game at this point is important for us, as we are currently sitting at the top of the table with a couple of teams following close behind.

The team dynamics have been interesting since I’ve returned to Liverpool. With a good portion of my teammates away with their national teams, namely England, Iceland and some younger players who were away representing Great Britain in the college games, the numbers at training have been low, which has forced us to focus more on our individual development. Developing as an individual during this off period of time is important for the betterment of the team as a whole in the long run. Throughout the season, you always notice areas of your game that needs improvement — areas that you may not have the time to focus as much attention on during the season, where your main goal is solely winning matches with your team.

While most of my time and energy lately has been spent running back and forth, picking things up and putting them down, jumping around on boxes and kicking a ball around once in a while, I have actually had some down time to continue my exploration of Liverpool and even house some American visitors along the way.

I am pretty blessed to have people in my life who want to be a part of this crazy world I live in. Two fellow New Yorkers, who I met through football when I was young, were traveling Europe and decided to make Liverpool one of the destinations on their journey. Liverpool is probably not one of the cities in Europe where most people would get excited about visiting, but I happen to really enjoy the artistic culture and laid back attitude of Liverpudlians (yup, that’s a real word!), and I enjoy sharing my discoveries with visitors. Granted the royal baby kind of stole my thunder, as my friends have decided to flee Liverpool to go experience London, but I’m looking forward to getting them back for a few more days when they return! 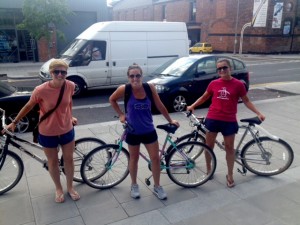 Liverpool turned Amanda DaCosta into a biker gang member...sort of.

So, the past couple of months have been a roller coaster. I’ve gotten to see my family and friends but then leave again, miss my dog, get back into fitness and match shape, and work on areas of my game that I need to improve. And join a biker gang. You heard me correctly! If anyone follows me on Twitter or Instagram, you’ve probably seen photos of my bike, Barney. It is purple and green and AWESOME, and completely indicative of my personality. Natasha Dowie and Becky Easton have finally taken the plunge to bringing their less-cool bikes to Liverpool, and we are taking it to the streets!

All of my antics aside, I have enjoyed reconnecting with my teammates and settling back into my home here in the UK. More of my teammates are starting to arrive again now that the second half of our season is rapidly approaching, and I couldn’t be more excited to start focusing on the team goals we have put in place for ourselves. The group of women on this team are pretty remarkable people and athletes, and I am lucky to be a part of what Liverpool FC is continuing to do on the pitch and in the community. I initially came to Liverpool with the hopes of winning a league title with this new team, and that opportunity is now within arms reach (especially mine, since my arms are freakishly long). Needless to say, I am getting a little too over-eager to get on a full sized pitch again and finish out the season.

I might have been in the air again for another trans-Atlantic flight, but my feet are firmly planted on the ground now here in Liverpool where my team and I have a job to do.