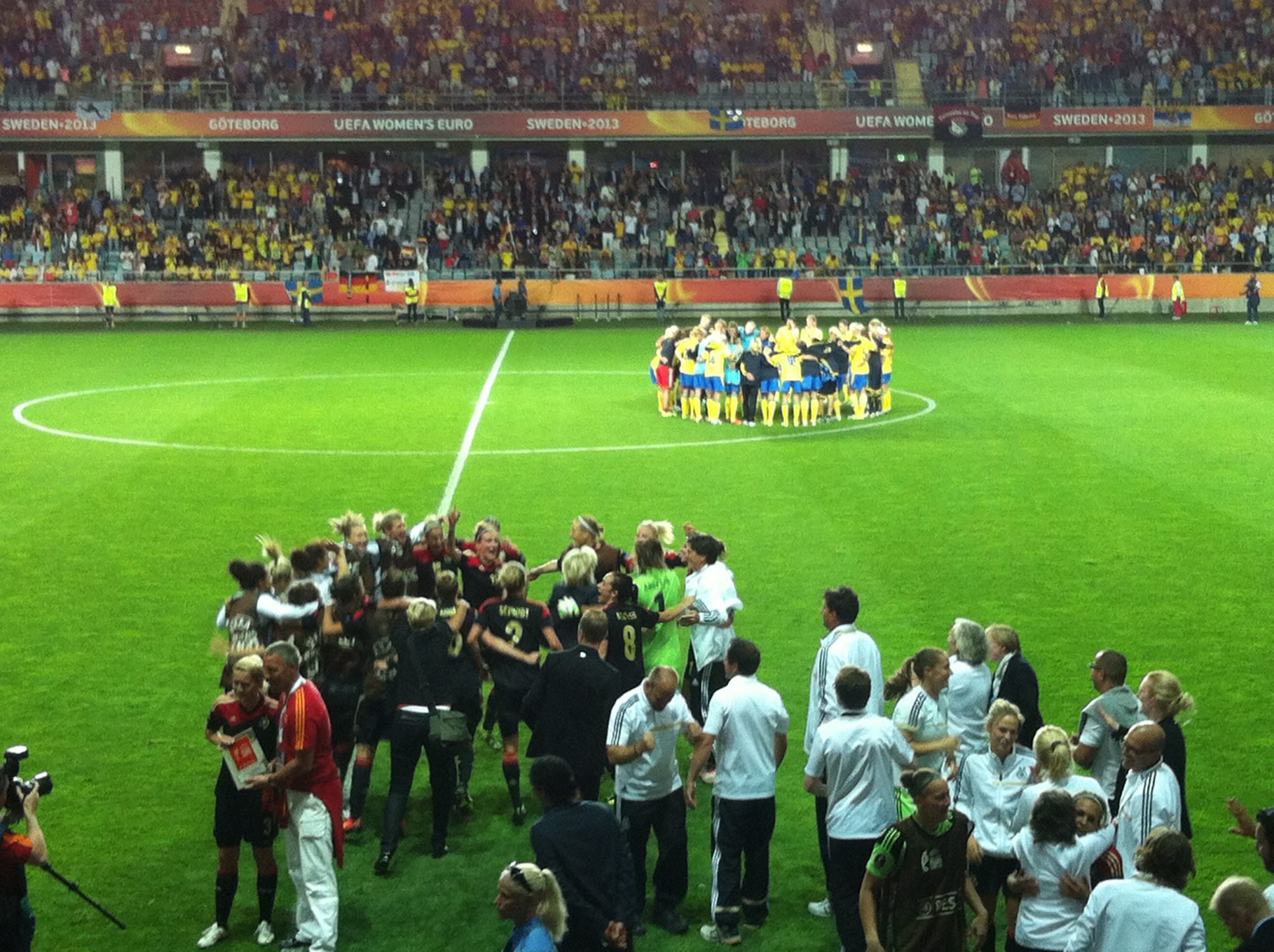 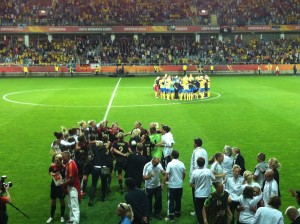 GOTHENBURG, Sweden — The most eagerly anticipated and hyped match of the 2013 European Championships was played Wednesday night at Gamla Ullevi Stadium and Germany held off Sweden 1-0 in an end-to-end match to advance to the final. Dzsenifer Marozsan’s goal in the first half was enough to knock out host Sweden 1-0 in front of 16,608 stunned fans.

In the 32nd minute Germany had luck with 21-year-old Marozsan when her attempt trickled ever so slowly towards the net, and found a home inside the left post for the only goal of the match after both teams traded chance after chance in an up and down fast paced first half.

“I’m very happy to win, and score the goal for us,” Morozsan said. “It was very exciting until it hit the goal, I was shivering.”

With Sweden running around in their own end, and with the ball taking its sweet time to cross the line, Marozsan wasn’t quite sure if she scored.

“Anja (Mittag) celebrated before I realized it was a goal.”

Lotta Schelin had a glorious opportunity to put Sweden up a goal on 15 minutes, when she broke down the right flank and fired a curling shot that just missed the far right corner of Nadine Angerer’s net. Moments later Anja Mittag had her own chance down the wing when she cut around her defender and tested Sweden’s keeper Kristin Hammarstrom.

Josefine Oqvist, who turned 30 on Tuesday, nicked the ball off Simone Laudehr in the 21st minute and cruised down the right side of the pitch unchallenged with plenty of space between her and Angerer. Oqvist ran herself into a difficult spot and had her shot hit the side of the netting, when she clearly had better passing options waiting inside the box. Given another great opportunity in almost the exact same scenario Oqvist centered the ball, giving Germany trouble. Kosovare Asllani was not able to get to the ball before Germany cleared it for a corner in the 25th minute.

Sweden squandered opportunities to score, and Germany proved to be the toughest of matches Sweden have face in any half of football at Euro 2013. The Germans went into the break with a 1-0 lead.

The Gamla Ullevi crowd got behind the Swedes when they came out to start the second half. An early corner on 48 minutes did not produce the tying goal but the momentum was palpable, and the roar of the yellow and blue spectators behind their team as they pressed forward was clear. Sweden had their chances throughout the match but they weren’t up against Finland, Iceland, or any other European minnow. The mighty Germans have won five consecutive European Championships and they just know how to win in the crunch.

Germany had a golden opportunity to go up 2-0 in the 60th minute when Hammarstrom was called upon to make a point-blank save on Mittag, who was sent in through the Swedish defense thanks to a lovely pass from goal scorer Marozsan. At the other end of the pitch, Schelin looked to have tied the game 1-1 with a curling chip over Angerer but the goal was called off due to a foul committed by Sweden. During a moment of confusion, Gamla Ullevi erupted thinking that Sweden had found an equalizer.

Germany’s strength in net prevailed, and has been spectacular in every match thus far at the European Championships surprising most fans, and media pundits. Angerer also shared her optimism after the match.

“Our defense is fantastic and our defense starts with our forwards. Even the forwards are working quite hard and it makes it easier for the midfield, and the midfielders are working for the defense. I’m proud of every player on my team.”

Sweden coach Pia Sundhage was extremely animated on the touch-line, ordering instructions for her squad. Looking to spark her team she brought on veteran Therese Sjogran as a substitute in the 65th minute for Antonia Goransson. The switch helped keeping Sweden alive as they continued to push forward and inch ever so close to finding that elusive goal. Oqvist hit the post, and Kosovare Asllani missed a tap-in during a mixup in front of Angerer.

Despite injuries, rebuilding, inconsistent play, and finishing runners-up in Group B, Germany have winning in their blood and they will move on to face Norway or Denmark in the 2013 European Championship Final on Sunday, July 28, at Friends Arena, in Solna, Sweden.

Notes: The Sweden team bus left without Coach Pia Sundhage following the match while she fulfilled every media request in the post game mix zone.