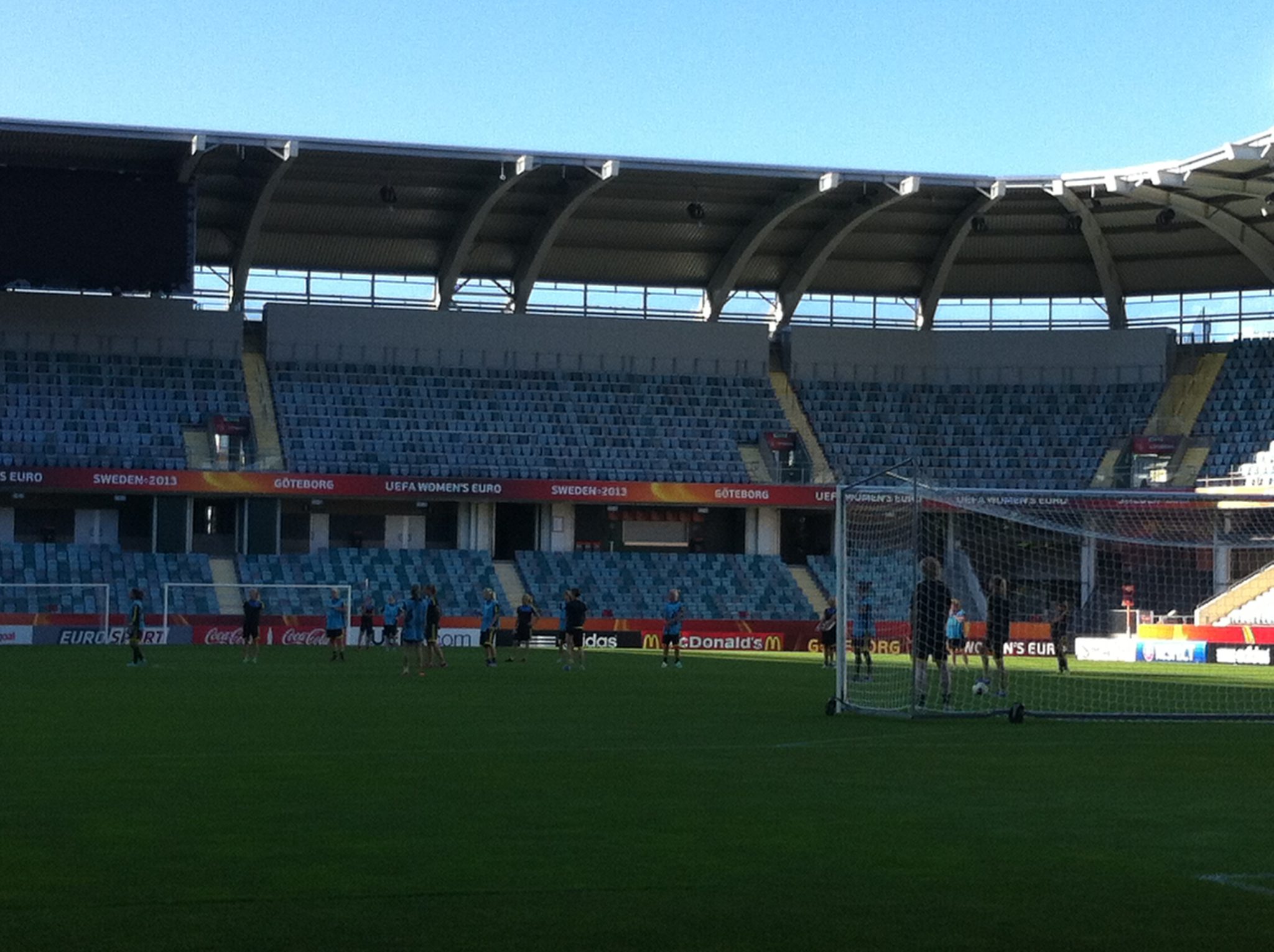 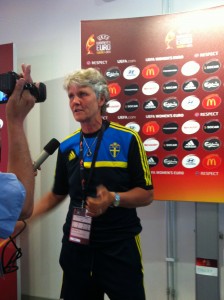 Pia Sundhage and Sweden are ready for a huge Euro 2013 semifinal against Germany. (Photo Copyright Harjeet Johal for The Equalizer)

GOTHENBURG, Sweden — After a thrilling match between Denmark and France on Monday night that saw the Danes knock off the favored Les Bleues 4-2 on penalties, the focus at the European Women’s Championships now moves towards semifinal matches between Sweden and Germany on Wednesday, and Norway and Denmark on Thursday. With France falling out of Euro 2013, Sweden know they have a fantastic opportunity to win the tournament, but Germany first stand in their way.

Germany have struggled at this tournament having scored only four goals in four matches. Silvia Neid’s team has played almost perfect defense having only allowed one goal. Overall, Germany’s star striker Celia Okoyino da Mbabi scored 19 goals in Euro 2013 qualification and the official final tournament. She leads Germany with two goals, and she is a vital cog in the German offense. Germany may have to face Sweden without her as she is not fully fit having picked up a right thigh injury. Silvia Neid isn’t quite sure if her team will be without their star player on Wednesday.

“We still don’t know if she will be able to play tomorrow, but tonight she will have some sprints to see what condition she is in. She is very difficult to replace, because she creates a lot of room for other players.”

Anja Mittag is a candidate to replace da Mbabi if the Frankfurt player can’t go. Mittag, who is the only German player who plays her club football in Sweden (Malmo), talked about how special it is to be able to play against Sweden despite not having played at her highest level during the competition.

“I’m very much looking forward to that,” she said. “I would maybe prefer to have Sweden in the finals but that’s the way it is. I’ve not been happy with my own performance so far. When playing for the national team, you have to move up a level.”

Fans and many German media personalities covering Euro 2013 have been quite surprised by how much Germany have under-performed. Going back to 1995, Germany have won five European Championships in a row. Germany have not been the Germany that we are used to seeing. With Germany struggling, Sweden coach Pia Sundhage is even more so impressed by what they have accomplished.

“They’ve got some injuries, and actually I’m fairly impressed by the way Silvia Neid has put them together,” Sundhage said. “It’s still a German team, and they know how to play and they’ve been very successful with the youth national team as well, and they have a lot experience.”

Germany have allowed one goal in four matches, and playing against the highest scoring team at Euro 2013 will prove to be quite the challenge for the Germans, but it also puts Sweden’s in-form striker, and Golden Boot leader Lotta Schelin up against a stingy defensive front that are clicking just at the right time. The Olympique Lyon striker paused before answering how Sweden will break down the German defense.

“You know we haven’t been scored on a lot either so I just think that we have two good teams defensively and we know how they work,” Schelin said. “We know that it’s going to be a tight game and we are going to do everything we can to score against them. We’ve shown until now that we can score a lot of goals so hopefully we can score goals on Germany too.”

Kosovare Asllani has been dynamite up top creating tremendous chemistry with Schelin, and Asllani leads the tournament with four assists. With opponents primarily focusing on stopping Schelin, Sweden’s other striker who plays her club football in France has been given all sorts of time and space to set up her teammates for can’t miss goals. The Trangsund, Stockholm native, talked about how great it is to play with Asllani.

“We’ve been working together for a while now and we know each other, we know where we want the ball and how we want it,” Schelin said. “I think it’s been working out really great.”

Germany has held an 11-6 advantage playing Sweden, and have outscored Sweden 33-24 in those matches. In a 1997 European Championship semifinal match in Karlstad, Sweden, Germany prevailed 1-0. Current players, including Germany keeper Nadine Angerer, and 36-year-old Swedish veteran Therese Sjogran both sat on the substitutes bench during that encounter while Silvia Neid was then an assistant coach with Germany.

Mittag, 28, is not expecting a hostile crowd at Gamla Ullevi and she had kind remarks to share when asked if she expected to hear any booing from the fans.

“Generally Swedes are friendly people, so I’m not expecting any boos. It’s nice to play in a stadium where everyone is against you.”

On the other side of the spectrum, Sundhage spoke of how well fans in Sweden have turned out to support her squad throughout their journey.

“It’s been fantastic from the very beginning since we played against England just before the tournament started. You can really feel, and hear the support from the big yellow and blue crowd and it helps a lot. I think that playing when you can actually hear the sound from the support in the crowd is the best thing that can happen.”

Notes: All quarterfinal, and semifinal matches at Euro 2013 where or are sold out with the expected crowd for the final match at the Friends Arena, in Solna, Sweden expected to be a crowd of 30,000 plus. Euro 2013 has set record attendance numbers with more than 200,000 spectators taking in live matches in Sweden.

Powell, Bini under fire after early Euro exits
The Lowdown: What’s in a defensive midfielder?