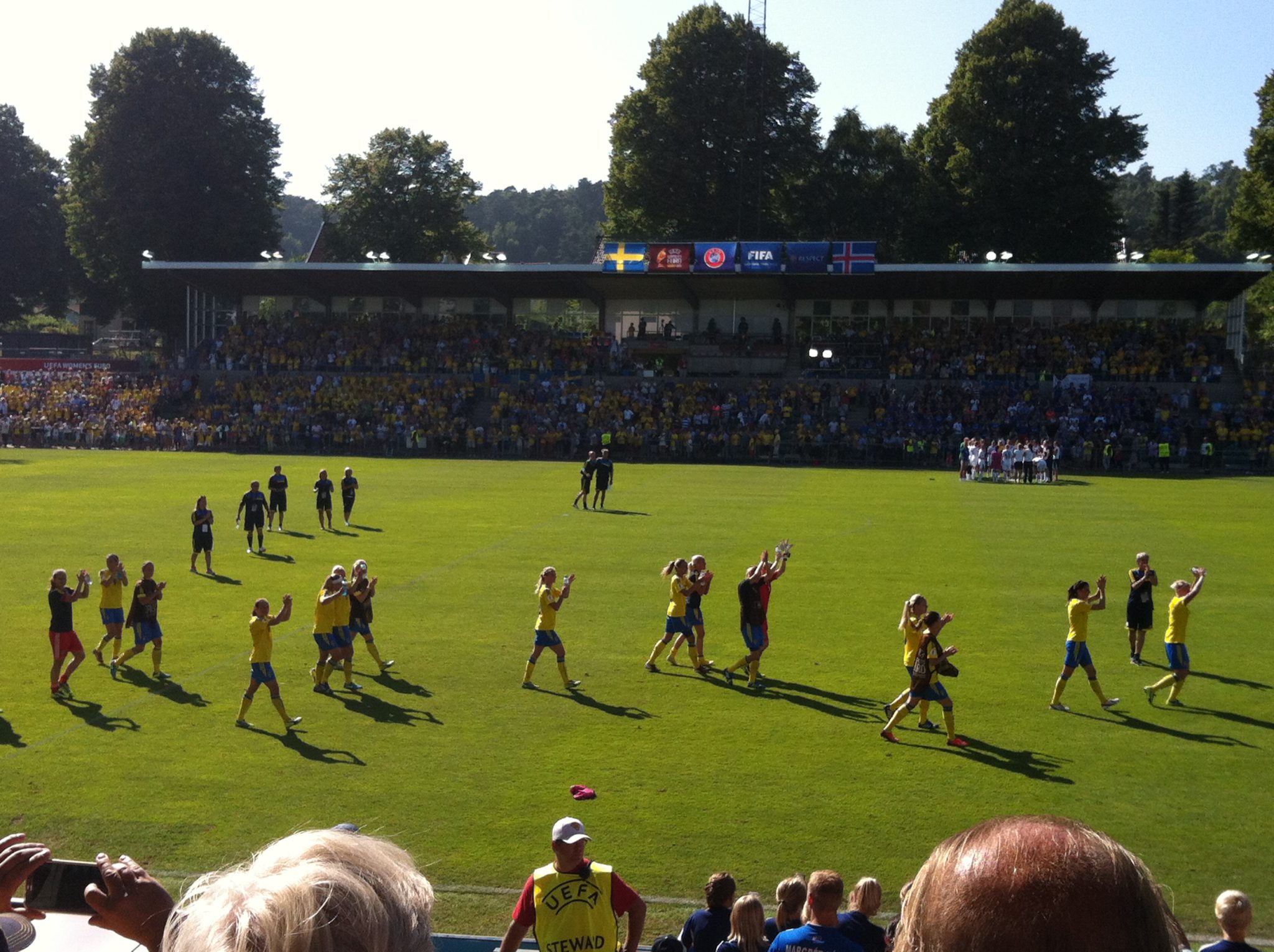 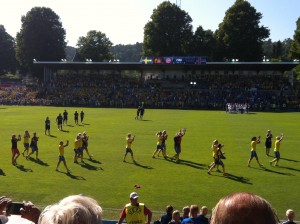 HALMSTAD, Sweden — Orjans Vall Stadium was packed to the rafters on a warm, and sunny afternoon as Sweden, Euro 2013 hosts and favorites demolished underdog Iceland 4-0 in front of a sellout crowd of 7,468 fans.

Sweden scored first half goals from the boots of Marie Hammarstrom, Josefine Oqvist, and Lotta Schelin. They added a final goal in the second half thanks to Schelin. The Lyon striker now leads the Golden Boot race with 5 goals, and her teammate Nilla Fischer is second with 3 goals.

“I think we did a really good game, of course we were helped by an early score, Fischer said. “I think we did a really good defensive job and that helped us to win the ball high up and create a good attacking game as well. I think after the first half, three to zero, we could just enjoy the game and be really careful with our defense so they didn’t manage to score any goals.”

Kosovare Asllani was named the UEFA Player of the Match and she played a brilliant game, working hard up and down the pitch all afternoon despite being hobbled with a left ankle injury that was noticeably wrapped in the mix zone following the match. Asllani talked about her teamwork, and chemistry with Schelin post game.

Marie Hammarstrom opened the scoring three minutes in with a curling low strike that eluded Iceland keeper Gudbjorg Gunnarsdottir. The Swedish striker with Balkan roots spoke of how important the early goal was for Sweden.

“The most important part was that we got an early goal because we knew that if we didn’t score in the first half, Iceland would have gained more confidence from that. After the first goal I felt like we could play our game even more and keep on dominating the game.”

Sweden carried the play from that moment on and quickly added to their tally with a goal in the 14th minute. Iceland were slow getting back to defend and Schelin sent a beautiful lob pass over the top to Oqvist. The Kristianstads forward was able to out run past the Iceland defenders to chip the ball past the oncoming keeper to score her second goal of the tournament.

The hosts weren’t quite done in the first half, and added another goal on 19 minutes when Kosovare Asllani delivered a brilliant cross from the right flank to a streaking Schelin for an easy tap in. Iceland didn’t get a sniff of offense going in the opening 45 minutes and finished the match with one shot on target. Sweden smothered them at every turn, and went into halftime with a commanding 3-0 lead.

The only blemish for Sweden in the first half was an injury scare to Caroline Seger in the 38th minute. Play was halted and she was attended to by trainers. Seger was hit in the face by the ball but the Swedish captain was able to continue on for the remainder of the match.

Sweden continued to carry the play and look for more goals as they pressed forward on the attack whenever they got the ball in the second half. Schelin added to her tournament lead in goals in the 58th minute when Asllani sprang her in on the Icelandic keeper. Schelin fired low to the left of Gunnarsdottir to score. Coach Pia Sundhage decided to rest her star striker for the rest of the match to guard against any fluke injury. Umea midfielder Emmelie Konradsson came on for Schelin on 66 minutes.

The Swedes weren’t tested often enough by Iceland. Having destroyed Finland and dominated Italy during the group stage, Sweden has not faced stiff competition that would normally test their strengths in goal, on defense, and in the midfield. Being able to run through Euro 2013’s somewhat weaker teams could prove to be costly if an in-form Germany challenge Sweden in the semifinals or final. Sara Thunebro spoke about just that.

“We are ready but we have a lot of respect for Germany and Italy so it’s going to be a tough game but when we played that good like we did today I think we can beat every team,” Sweden’s Sara Thunebro said.

The Swedish back line of Jessica Samuelsson, Nilla Fischer, Charlotte Rohlin, and Thunebro weren’t in any danger when Iceland had possession. Sweden were able to control the play, and play with the ball for the full 90 minutes. Fischer didn’t have to worry about getting forward for an important corner, and wing-backs Samuelsson, and Thunebro were able to freely move up the flanks to expose Iceland. Fischer knows stronger opponents are to come.

Sweden could be the toughest team to knock out of the European Championships, and Iceland proved that they might be among the top 8 teams in European Women’s Football but they are nowhere near the class of Sweden. They should be proud they advanced from the group stage after a valiant Euro 2013 showing.

Notes: Germany and Italy played in the other quarterfinals match on Sunday, with Germany winning by a score of 1-0. Sweden will now face Germany in a semifinal match on Wednesday night in Gothenburg at Gamla Ullevi Stadium.