Sweden midfielder Caroline Seger and coach Pia Sundhage speak to the media ahead of Sunday's quarterfinal game vs. Iceland. (Photo Copyright Harjeet Johal for The Equalizer)

HALMSTAD, Sweden – The quarterfinals of the 2013 European Championships kickoff Sunday at Orjans Vall Stadium when host country Sweden take on monumental underdog Iceland. Sweden finished a top of Group A with 7 pts. while Iceland finished third in Group B with 4 pts. thanks to a 1-1 draw against Norway, and a surprising 1-0 win over the Netherlands.

Sweden are the heavy favorite, however this match will not be a cakewalk for the yellow and blue. Sweden started the tournament slow with a 1-1 draw against Denmark. They smashed rivals Finland 5-0, and won their final game against Italy 3-1. The hosts have started off slowly in two of three matches, and midfielder Caroline Seger is well aware of the talk concerning Sweden becoming complacent against Iceland on Sunday afternoon.

“I think that everyone else around thinks that we are going to take them lightly but my feeling is not the same,” Seger said. “I know that when it’s a tournament every team seems to get better and play at their highest level and I know it’s going to be a tough game. I know we have to be the best out there and be professional so I’m not scared.”

Sweden and France are two of the favorites to meet in Stockholm on July 28. Both teams have the skill and ability to crush every opponent they face before the final match at Friends Arena in Solna, Sweden. The hosts have to guard against the pressure, and huge media presence following the team. It’s possible that the only team that can beat Sweden is Sweden themselves, though a semifinal meeting with Germany looks likely. Seger, the former caption of the Western New York Flash, is used to the position. 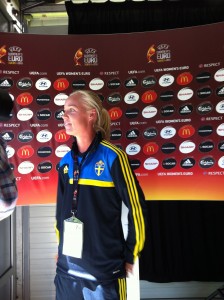 “I think it’s a matter of taking it one game at a time and not running away in your thoughts and being right here and just enjoying the moment and making the most of it.”

Coach Pia Sundhage talked about what her team needs to watch out for when they take on Iceland.

“They are very compact, they are well-organized, and they are really fighters,” she said. “They play together and the other thing is their transition from defending to the attack. We need to keep an eye on the way they transition when they win the ball and go forward to make sure we can stop them with good defense.”

Iceland have one win and two draws in 14 previous matches against Sweden. The Swedes have outscored their Scandinavian rivals 47-8 in those matches. Iceland’s coach Sigurdur Eyjolfsson knows his team will be the underdogs against Sweden, but that’s something they faced on many occasions.

“Normally when we play at this level we are the underdogs so that’s something that we are used to,” he said. “I don’t think many people had belief in us before the tournament and that’s the same position before this match and we aim to prove people wrong.”

Iceland is expected to park the bus and play an all-out defensive game against the Swedes. Having only scored a pair of goals in three matches at Euro 2013, Iceland can’t afford to get into high-scoring game against a potent Swedish offense. Eyjolfsson talked about what style of play his team will put forth.

“When you play Iceland you should prepare for a physical battle. I think we always turn out for every match and play physically… that’s our style of play but we’ve also shown some good quality in the tournament and hopefully we can do that in tomorrow’s match.”

Avaldsnes IL midfielder Holmfridur Magnusdottir will be suspended for the match as a result of yellow card accumulation. Iceland will hope to replace the 28-year-old with Kristianstads youngster Gudny Bjork Odinsdottir. If Iceland can pull out a win it will be the biggest football victory in the country’s history.

Notes: Swedish forward Kosovare Asllani participated during her team’s training session with a wrap on her left ankle. The Paris St. Germain star has been battling an ankle injury since the opening game of the tournament. The forecast on Sunday is expected sunny with a high of 77 degrees Fahrenheit.