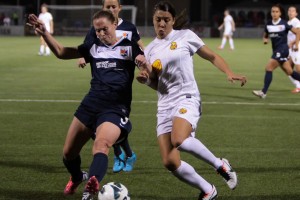 For the first time since Week 8, the NWSL stayed dark during the weekdays.  The weekend action is chock-full of important soccer in which teams can either pull away from the pack or get drawn right back into it.  Here is a closer look at Week 15 action in NWSL:

Quick Look: After not meeting until Week 14, the Red Stars and Spirit will meet for the second time in 11 days with the Red Stars looking to return to .500 for the first time since they drew on opening day.  They will have to do it with a new center back pairing though after Taryn Hemmings tore her left ACL and MCL last weekend against Kansas City.  The Spirit are just looking for some traction having lost three-straight since getting a draw in Mark Parsons’s coaching debut.  They have not scored in the run of play since May 16.  They are mathematically eliminated from playoff contention with a loss.

Tactical Short: With Rory Dames forced to throw a new partner for Sonja Fuss in at central defense (our guess: Jackie Santacaterina), the Spirit should be targeting Conny Pohlers for crosses to where she likes to post herself near goal.  Problem is that service to Pohlers has been poor and she has done little with the few times she has received quality balls.

Quick Look: They have played three times and three times the Blues have both won the match and kept a clean sheet.  This is an entirely different Reign team, though, and FC Kansas City are licking their wounds after last weekend’s 3-3 draw that saw them take a 3-1 lead to the 90th minute against a Red Stars side forced to play short due to a late injury.  The Reign are 4-0-2 since Megan Rapinoe got there and they will need to remain hot to have a chance at a miracle playoff berth.

Tactical Short: Lauren Holiday (nee Cheney) remains the preeminent on-the-balk midfield threat in the NWSL and will represent the Reign’s toughest matchup since their streak began.  The trio of Jessica Fishlock, Keelin Winters, and Christine Nairn has been a sight to behold in midfield.  If they can keep Holiday under wraps it will represent a new level for the once woebegone Reign, who are still looking for their first clean sheet of the season.

Quick Look: League leader Sky Blue have three losses on the season and two of them have been to the Flash.  Since Western New York’s win over Sky Blue, Aaran Lines’ side is only 2-2-3 with both wins against the Spirit.  Sunday represents the start of a glorious finish that will see the Flash play five of their last six at Sahlen’s.  A win here will pull them within four of the top and crunch the table together.  A loss and the Breakers and/or Red Stars could be nibbling at their heels.

Tactical Short: The teen Aussie matchup is always a good one—if Aaran Lines makes it happen.  Sam Kerr has been a right-sided player this season except against Sky Blue, when she has played left and gone up against Caitlin Foord.  Kerr has dominated her younger countrywoman in the two Flash victories and can key another with more solid work on the left flank.

Quick Look: A fantastically important matchup will see the Thorns look to snap a four-game winless run against a Breakers club who has fought its way back into the playoff race.  They played two Saturdays ago and Alyssa Naeher was outstanding in the second half of a 2-0 Breakers win in Portland.  This week Ashley Phillips gets the nod after Naeher underwent nasal surgery.  If the Breakers win, they will trail the Thorns—currently in second—by only four points.  A loss and they could slide as many as seven adrift of a playoff spot.

Tactical Short: The Breakers wrecked the Thorns on the counterattack two weeks ago.  That plays right into the soft underbelly of Cindy Parlow Cone’s side—midfield possession.  The key to the match will be how well the Thorns’ midfield can hold possession to set up chances for Alex Morgan, else face the daunting Breakers’ counter and the finishing touch of Sydney Leroux.