The Lowdown: Phillips stars for Breakers 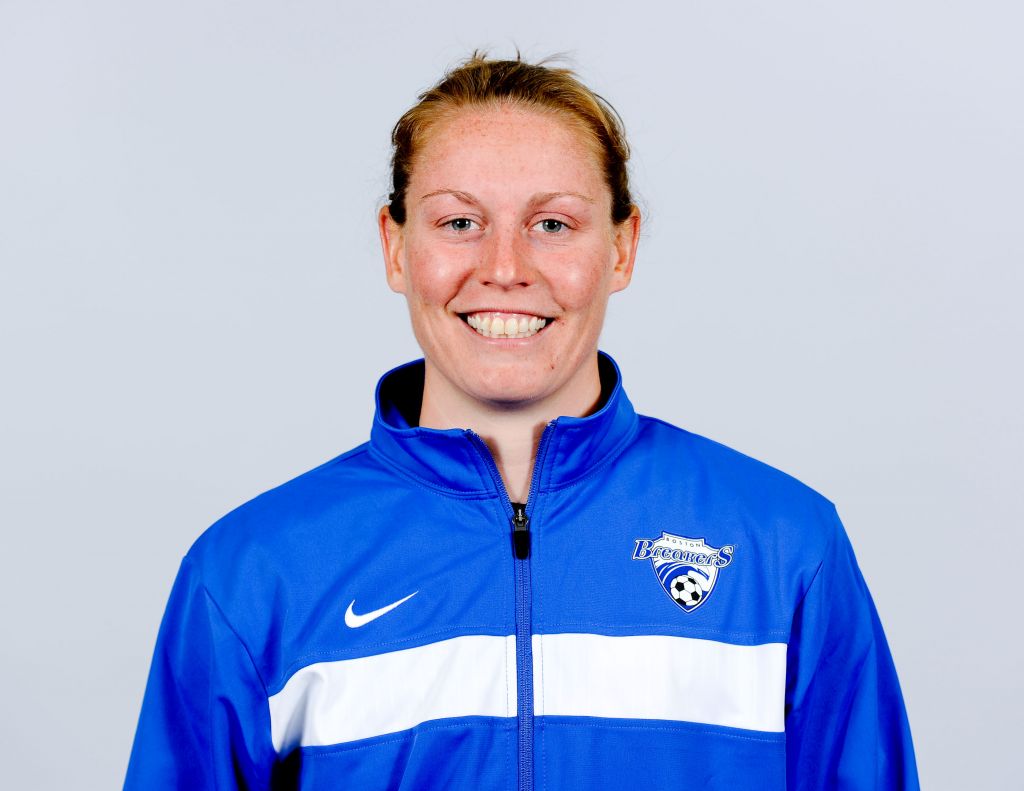 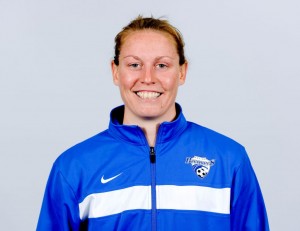 Ashley Phillips has been in and out of the Breakers' lineup, but the 27-year-old goalkeeper had a breakout performance last weekend.

In the 13th minute of Saturday’s Sky Blue-Breakers game, Ashley Phillips found herself staring at Lisa De Vanna, who was moving in with only the ball in between them.  Breakers fans no doubt took a hard breath, remembering how De Vanna torched their defense during a 5-1 Sky Blue victory on the same field 42 days earlier.

“With her speed that’s her thing — she likes to get in behind and the last time we played them at Sly Blue that really gave us a problem,” Phillips recalled a few days later.  “We talked about it with our coaches, trying to read that play and come out and making her make an exceptional play if she was going to get me.  I just came out; hoped to just kind of disrupt her as much as I could.”

Phillips met De Vanna with a slide at the top of the 18.  If De Vanna could get by and keep the ball at her feet it would have been a tap-in goal.  Instead Phillips’ presence forced the Australian forward to push the ball well wide of goal.  Her biggest save of the game did not even register on the stat sheet.

“I think it was a big enough area for her to have to hit around that it made her just kind of push it wide,” Phillips said.

Coincidentally or not De Vanna was quiet most of the night after that (she was responsible for one of Phillips’s two good saves in the second half) while Phillips kept a clean sheet for the first time this season.  The only downside was that the Breakers couldn’t score either and settled for a 0-0 draw.

“I would say it probably was,” Phillips said about whether it was her best showing of the season.

Breakers coach Lisa Cole said, “I’ve said from the beginning that both Ashley and Alyssa (Naeher) have done a great job for us, but what’s kind of been missing is them coming up big for us.  I think in Portland (2-0 Breakers win) Alyssa came up big for us and here in Sky Blue Ashley came in and did an excellent job and kind of saved us from ourselves sometimes.  That’s important.  A goalkeeper’s got to be consistent, they’ve got to be good with their feet, and they’ve got to come up with some good saves every now and then.”

Phillips agrees.  “I think the whole season we’ve done some good things and we had talked about one of us needing to come up big and kind of show the team that we are both there and can win some games.”

Naeher had a standout match the previous weekend in Portland, earning The Equalizer Player of the Week honors.  Unfortunately her subsequent follow-up showed further nasal issues—Naeher broke her nose June 16—and she underwent minor surgery.  That opened the door for Phillips to play for the first time since June 16 when she was pulled at halftime—against Sky Blue—in favor of Alyssa Naeher.

Phillips and 18-year-old Mexican allocation Cecilia Santiago had split time up to that point with the 27-year-old Clemson grad having forged ahead.  It was an odd place to be for someone who went to training camp to help out with the Breakers’ goalkeepers, not really ever expecting to be one again.

“I moved on to college coaching (at Northeastern) and kind of took that on as a full-time role,” she said.  “I had spoken to Lisa about maybe coming in and working with the goalkeepers.  And things just didn’t pan out with the talent that we had and Lisa felt like some experience there might help.  So she asked me to kind of jump in and start training.  And the next thing leads to the next thing and I’m playing in games and starting.”

The Breakers brought in Naeher a few weeks into the season, a move that may have insulted some starters, but not Phillips.  For starters, Cole was up front with her from the outset that the team was searching for another keeper.  And Phillips—who played with Naeher on the WPS Breakers—knew Naeher was looking for a way back to the U.S.

“We have an extraordinary relationship,” she said of her and Naeher.

Phillips will return to Northeastern soon after the Breakers season ends, and she sees college coaching as her future.  As for playing beyond 2013 she has not made up her mind but acknowledged she now, “has a few things to consider.”

Naeher is out at least one more weekend so Phillips will be in goal again Sunday afternoon when the Breakers host the Thorns in what will be their most important match of the season.

Here is a look at how the teams stand with five weeks to play in the inaugural NWSL regular season:

The league leaders were held to a draw at home by Boston on Saturday, but everyone behind them also drew leaving them four points clear at the top.  A loss in Rochester on Sunday will crunch the standings together while a win will all but assure them a playoff spot.  The Flash though have handed Sky Blue two of their three losses this season.

The most maligned team in the league—largely due to their disproportionately large fan base—broke out of its scoring slump after 331 minutes.  Meleana Shim’s goal was the only one for the Thorns in a 1-1 draw but instead of that being blamed on offensive ineptitude, much of the credit goes to Flash keeper Adrianna Franch.  They still have not won since June 16 and maintain a tenuous hold on 2nd place.

The Blues were on their way to second place when they took a 3-1 lead to the 90th minute in Chicago on Sunday.  But a funny thing happened.  The Red Stars scored in the 90th and 95th minutes to snatch a point and take two from FC Kansas City.  It was the second time this season Vlatko Andonovski’s club has led by two goals in the 85th minute or later and walked away with a draw.  That’s a bad sign.  Are they the team that could slide out of the top four down the stretch?

The Flash played twice during the week and in each game arrived at the 80th minute deadlocked.  Thursday in Seattle they surrendered the game-winner to Christine Nairn.  Sunday in Portland Abby Wambach had her penalty kick saved by Karina LeBlanc.  That leaves them in fourth, but it also ended their long road run and they can tighten up the entire table by beating Sky Blue on Sunday.  That starts a stretch where they play five of their final six at Sahlen’s Stadium.

The Breakers played well in a scoreless draw away to Sky Blue FC, but a weekend when everyone gets a point works to the disadvantage of the chasing teams.  A huge home match against the Thorns looms on Sunday.  A win will thrust the Breakers into the thick of the race while a loss could leave them as many as seven points out of fourth.

It was quite a week for the Red Stars who snatched a point against FC Kansas City despite being down two goals and a player heading to the 90th minute.  A rematch with the Spirit on Saturday—the Red Stars won last Wednesday in Washington—represents a golden opportunity to pick up another three points, reach .500, and stay on the fringes of the race.

The Reign legitimized their unbeaten streak last week, extending it to six games including a hard-fought, 3-2 win at midweek against the Flash.  The playoffs are still a longshot but perhaps they will catch the Blues reeling a bit after that side’s rough ending to the weekend.  One word of caution though: The Reign have already played FC Kansas City three times and have not scored.

The Spirit played two decent matches at the outset of Mark Parsons’ tenure, but last week represented a step back.  They looked awful against the Red Stars and not much better in Seattle.  The good news is they’ll finally have a few days of practice, something that has eluded them during a rough recent stretch of games.

The goals flowed in Week 14 with 18 across six matches even as one of them ended in a goalless draw. Here’s how the goals break down with Week 14 totals in parenthesis:

— Watching Christine Nairn last week I couldn’t help but think to myself, ‘maybe she should have been on the list of potential USWNT call-ups.’

— As if to tacitly stick it to whoever made the decision not to televise their match, the Flash and Thorns put on a wildly entertaining match Sunday at JELD-WEN Field.  Both teams were sharp in their attacking and the goalkeepers put on a fantastic duel.  The Flash’s Adrianna Franch was probably a bit better, but her counterpart Karina LeBlanc made the seminal play of the match, stopping Abby Wambach’s 84th minute penalty to preserve the 1-1 draw.  Lost in the thrill of the moment was that both teams trudged off winless in their last four.

— The boxscore will not show that the Red Stars scored twice playing with 10 women on Sunday because Taryn Hemmings was still credited with having played all 90 minutes.  But she came off after injuring her knee on the play that saw Erika Tymrak give FC Kansas City a 3-1 lead.

— The Red Stars told The Equalizer they will have an update on Hemmings’s knee sometime Wednesday.  A three-day lag generally does not lead to good news.

— Lori Lindsey was subbed out of the Spirit’s Wednesday loss to the Red Stars, leaving eight players who have been on the pitch for every minute their teams have played.  They are:  Leigh Ann Robinson (KC), Jen Buczkowski (KC), Kathryn Williamson (Por), CoCo Goodson (SBFC), Adrianna Franch (WNY), Estelle Johnson (WNY), Alex Sahlen (WNY), and Brittany Taylor (WNY).

— Jordan Angeli is planning on training with the Washington Spirit later this month.  She said she has no expectations of playing this season but wants to see how she holds up against top competition.  Angeli has not played since tearing her ACL in April 2011.

— The race for the golden boot is shaping up as an exciting one.  Abby Wambach joined Sydney Leroux on 10 goals and had what would have been her 11th saved from the spot by Karina LeBlanc.  Meanwhile Lauren Holiday picked up where she left off as Lauren Cheney by scoring her 9th for FC Kansas City.

— And finally, if you like to talk NWSL expansion by the water cooler, you can arm yourself with this:  The Houston Aces of WPSL say their long-term goal is to join NWSL.  They stopped short of putting a timeline on when that might happen.  Several expansion city candidates are under consideration for 2014.